As COVID cases surpass worst-case scenario, it’s back to school for kids

Doug Ford was well on his way to creating a crisis in education and health care before the pandemic hit. Why stop now? 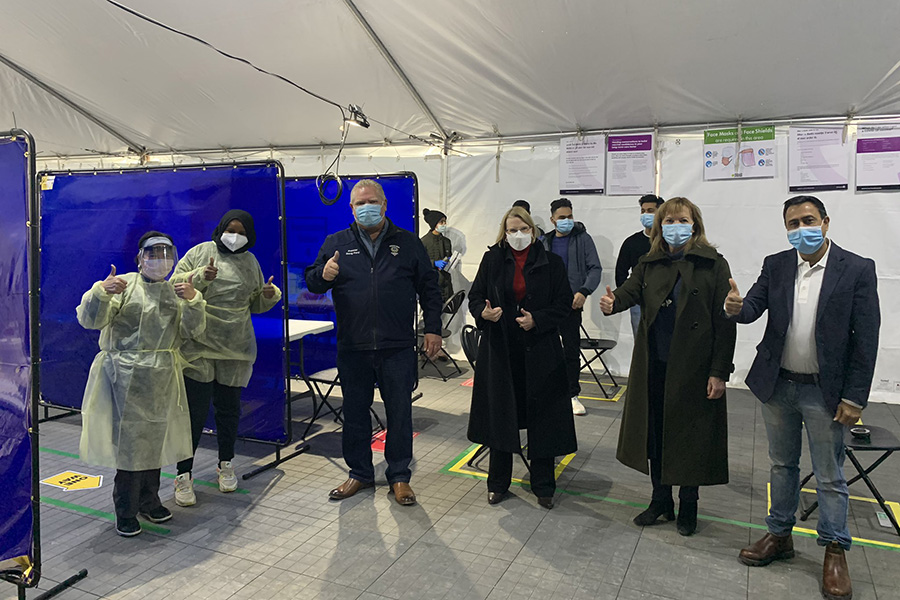 Doug Ford gives the thumbs up during a campaign-style stop at a vaccination pop-up on Tuesday.

Ontario set a new record number for daily COVID cases reporting 13,807 cases on Thursday, which is even worse than the worst-case scenario predicted a couple of weeks ago. But it will be back to school for kids after the holiday break in any event, only not until Wednesday, January 5.

At a 3 pm press conference, Ontario medical officer of health Kieran Moore confirmed that the province will delay the reopening of schools by two days.

Premier Doug Ford told reporters during a campaign-style stop at a pop-up vaccination site on Tuesday that an announcement on school reopenings would be coming “in a couple of days.” But it was left to Moore to deliver the news as speculation mounts on social media about the premier’s conspicuous absence over the holidays amid an exponential rise in COVID numbers. #DougFordCottage continues to trend on Twitter.

HEPA filter upgrades at schools, N95 masks for teachers and staff, and more targeted rapid testing will also be part of the province’s reopening plans. Will it be enough to stem the tide (tsunami?) or a case of too little too late?

Also, Ford was given the political cover he needs this week in the form of a letter signed by some 500 doctors calling on the government not to delay the reopening of schools over mental health concerns.

The head of Ontario’s COVID science table had also recommended that no consideration be given to closing schools for an extended period until capacity limits on businesses, arenas, etc. are reduced to arrest the spread of the virus. On Thursday, Moore also announced further capacity restrictions at sports stadiums and indoor event venues to a maximum of 1,000 people or 50 per cent, whichever is less.

Where schools are concerned, however, all indications are that the Ford government is prepared to ride this one out, come hell or high water, just as it has with other waves during the pandemic. We’ve gone past the point of no return. The die was cast months ago that we’re going to have to learn to live with this thing. Fair enough.

But in the meantime, it seems we can’t count on this government to do everything necessary to give us the tools to protect ourselves and our kids until the last minute, or until the government is left with no choice, whatever comes first.

The question shouldn’t even be about whether schools should remain open. The Ford government has had months to make the necessary investments in ventilation upgrades, rapid testing and personal protective equipment for teachers and staff. But once again it’s taken another crisis to spring into action.

Teachers’ unions have been calling for more protective measures like N95 masks and the widespread distribution of rapid tests for teachers and staff since the fall, that was before Omicron even entered the picture.

The Ontario English Catholic Teachers Association (OECTA), the Elementary Teachers Federation of Ontario, the Ontario Secondary School Teachers Federation and CUPE called on the province earlier this month to expand its in-school rapid testing pilot program to regular testing in all schools. The Ford government had reportedly recently committed to the distribution of N95 masks to teachers and education staff starting in January, at least according to OECTA president Barb Dobrowolski.

Personal protective equipment like goggles and shields as well as medical masks are already being distributed to school boards by the province, although that hasn’t been standardized across all school boards. But until Moore’s announcement on Thursday, the government had refused to release details on when (or even if) the mask and other measures would be put in place.

Now with Omicron proving a more contagious variant of the virus, whether the masks and increased testing will be enough to keep a lid on the spread of the virus is another question. Most elementary school kids, for example, are not vaccinated. Only 43 per cent of Ontario children between ages 5 and 11 have received their first dose of the COVID-19 vaccine.

Other provinces (BC, Quebec, Manitoba and Nova Scotia) are phasing in a return to school in the face of surging COVID numbers, which by some estimates are not expected to peak in Ontario until mid-January. Moore suggests the variant won’t run its course for another six to eight weeks.

The modelling conducted by Ontario’s COVID science advisory table recently suggested a worst-case scenario of some 10,000 new cases per day by January 1. But the rate of infection is turning out to be much higher than predicted. At the same time, the province’s testing regimen seems to have collapsed with lines to get tested outside assessment centres growing and access to rapid tests restricted pretty much to those who can afford the $40 charge.

What’s the plan for schools should cases continue to climb? That scenario is why some medical experts are calling on the province to phase in a restart instead of reopening now and being forced to close a week or two down the road.

Some hospitals, meanwhile, are facing staff shortages because of the exodus caused by burnout (not to mention, the mess the Ford government made of the pandemic in the first place). Right now, ICUs are stretched in some hospitals, but the fear is that the exponential growth in COVID numbers will add to the stress on the health care system, despite accepted expert opinion the Omicron variant may be less severe than first believed. The Registered Nurses Association of Ontario says “it’s a question of when not if” that hospital health care system will collapse under the weight of Omicron.

We can continue to bang our heads against the wall thinking about the many occasions this premier and his government have made the current crisis unnecessarily worse by not acting more decisively and opting instead for a wait-and-see approach to the pandemic.

A cynic would say that Ford was well on his way to creating a crisis in education and health care before the pandemic hit. Why stop now?

One response to “As COVID cases surpass worst-case scenario, it’s back to school for kids”