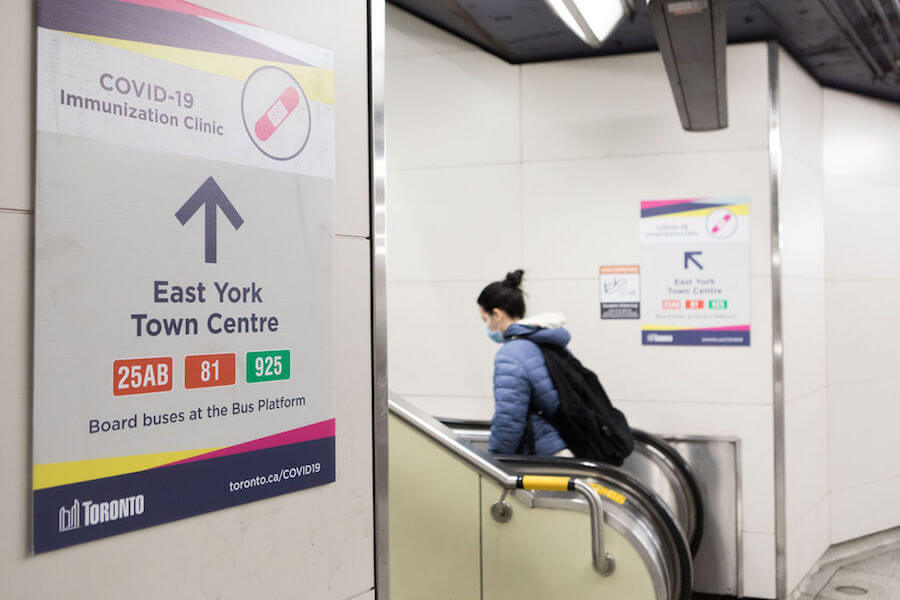 As daily COVID numbers rose over the 1,000 mark on Friday for the first time since May 30, the province announced that it will be fast-tracking its rollout of vaccine booster shots for people over 50 starting December 13.

COVID vaccines are proving a bulwark in the fight against the pandemic. The last time daily COVID cases eclipsed the 1,000 mark, there were 614 people in hospital ICUs in Ontario. That number was 146 on Friday.

Still, the exponential rise in case numbers is a worrying trend as Ontario’s COVID-19 science advisory table warned this week that hospitals don’t have the resources to accommodate a surge in COVID cases like before because of “worsening staffing shortages, health-care worker burnout, and health system recovery efforts.”

The average number of daily cases over the last week has hovered around 866, which marks a 22 per cent increase over the previous week. At the current rate, Ontario will see a doubling of daily COVID case numbers in some three weeks’ time.

The province’s chief medical officer of health Kieran Moore warned weeks ago that we would likely be in for a rough winter. Part of that was predictable and has to do with the weather getting colder and more people congregating indoors. And part of that has to do with the lifting of COVID restrictions.

But the emergence of the Omicron variant, which is just beginning to show itself in Canada – and scientists suggest may be more transmissible and able to slip vaccine defences than the now dominant Delta variant – is heightening the sense of anxiety and urgency to get boosters distributed.

While vaccines have been a major line of defence, they won’t be enough on their own. Testing and contact tracing to isolate the virus and new strains that emerge before they spread will be crucial to stemming successive waves of the pandemic. Experts agree that it’s the only way we’re going to stay ahead of the virus.

But on that front, the province has been slow off the mark, while recent efforts to put systems in place to conduct widespread testing have been spotty at best and hampered by confusion – as well as a $40 fee to buy rapid tests. They were supposed to be a “game changer,” as the premier once intoned. Not so much, it seems, for those who can’t afford the cost.

A dozen assessment centres across the city are still testing for COVID, but the bulk of the task of testing has been farmed out by the province to Shoppers Drug Mart pharmacies. And you can only get tested at a pharmacy if you do not have symptoms. But there’s some conflicting info about that online.

Schools have become a major source of community spread. Outbreaks have been reported in 160 elementary schools in the province since the beginning of the school year. But Ontario only launched a testing program in public schools in October (after it was revealed that private schools had been supplied with test kits).

Students can now get a test kit from school to take home and then drop off a sample for testing later. But unlike pharmacies, you have to be showing COVID symptoms to get one. The province also plans to distribute tests to students to take home during the upcoming winter break.

But even the director of Ontario’s COVID-19 science advisory table says that’s not enough. He’s recommended periodic testing once or twice per week in schools once cases surpass 1,000 daily, particularly in higher risk areas of the city, to catch the virus before it can be spread to families and in the community.

Chambers of commerce have been distributing free test kits from the province to businesses so employees can be tested. But the kits are only available free to small and medium-sized businesses of under 150 employees. It’s also unclear how many businesses are actually availing themselves of the kits.

Vaccine passports introduced by the province in the summer have helped keep a lid on the spread of the virus as restrictions were lifted on indoor capacities on businesses. But the passports are not required for essential businesses like grocery stores, pharmacies and banks. And for non-essential services like restaurants and bars, enforcement of passports has been left up to business owners.

Besides checking for vaccine status, restaurants providing indoor dining are also supposed to keep a log of customers. But those rules are not being followed by all. Proof of vaccine requirements are supposed to be lifted January 17, depending on COVID numbers.

On Friday, Toronto Public Health issued a statement notifying the public of a “potential exposure” of the Omicron variant in a downtown Toronto cafe. The restaurant owner told the Star that the restaurant is checking for proof of vaccine but not logging customer contact info.

The recent surge in COVID cases has exposed huge holes in the province’s testing and contact tracing regime.

But growing evidence that the coronavirus is airborne and not just transmitted through contact with nose droplets brings into question another provincial policy – whether the use of masks should be mandatory indoors.

When the Ford government brought in vaccine passports and lifted capacity restrictions in larger venues like theatres and sports arenas, there was no mandatory masking requirement introduced at the same time for those spaces. With Omicron now floating around in the air, it’s becoming clearer that it may be time to revisit that policy along with the need for more robust testing.