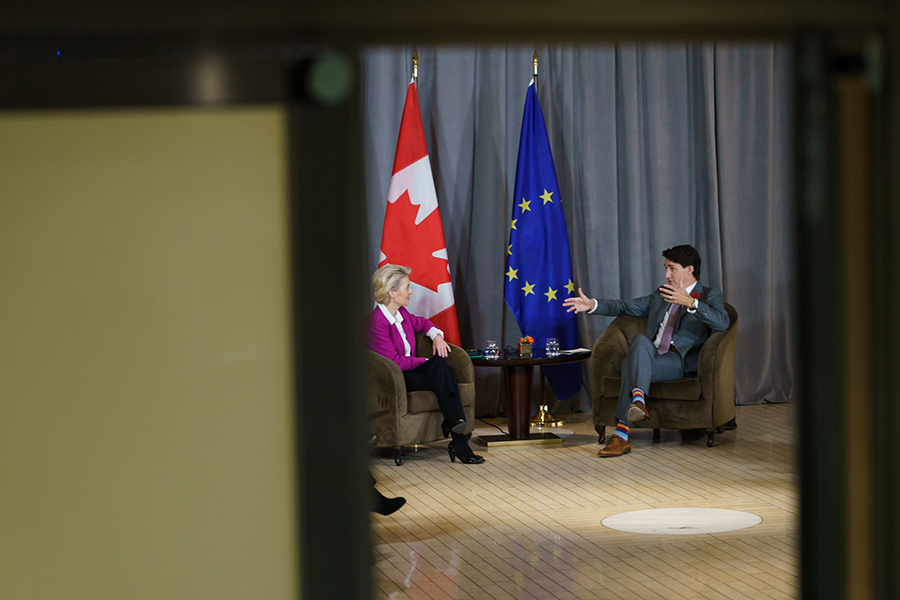 The G20 wrapped up in Rome on Sunday. World leaders took part in a photo op to mark the event, gathering at the Trevi fountain to toss coins into the water. It’s an ancient tradition meant to bring luck. The world could do with some of that.

But Prime Minister Justin Trudeau was absent from the coin toss – as was U.S. president Joe Biden. The PM was reportedly getting a head start on the COP26 United Nations Climate Change Conference starting in Glasgow on Monday. It’s a crucial moment for the planet and for the next crisis of our times – climate change.

But some among the conservative press corp following Trudeau on his trip were more focused on the PM’s absence from the photo op than the business of diplomacy or future of the planet.

The PM was also late to the traditional “family photo” of world leaders at the G20, the press dutifully notes. There, too, Trudeau had his reasons – he was reportedly in discussions with British PM Boris Johnson, who arrived late to the photoshoot with Trudeau.

But infantilizing the PM on the world stage has become the stock-in-trade of Canada’s foreign affairs pundits.

There has been much criticism of PMJT’s handling of the foreign affairs file (some of it legit), but it’s become farcical.

Trudeau’s itinerary (released to the press) spells out somewhere in the order of a dozen private meetings with world leaders during his Rome visit. But the chorus that Trudeau is Canada’s nowhere man on the world stage continues. (“Doesn’t have a point of view/Knows not where he’s going to.”) Some media folks were even tweeting (again) about Trudeau’s socks being all the rage of international media even before he got to Rome. Socks. More important than human rights and trade. It never gets old to the PM’s critics. If only he had a bigger… presence.

Comparisons to Harper and Mulroney are often drawn by the press when talking up the PM’s international failures. One embraced tyrants in the name of free trade. The other sucked up to Ronald Reagan and hasn’t been Prime Minister for almost 30 years. But no matter. Canada seems to have the respect of the world everywhere but in Canada.

Last week’s appointment of Mélanie Joly as Canada’s top diplomat – she takes over from Marc Garneau as foreign affairs minister – was yet another example of the press’s unholy fixation with the small-minded when it comes to Canada’s place in the world.

With Garneau expected to be named ambassador to France, his departure was widely expected.

But most Ottawa observers didn’t figure on Joly being his replacement. Her appointment has been roundly criticized by pundits as a disaster and further evidence that the Trudeau government is not serious about foreign policy.

The heavy lifting in foreign affairs has historically been handled by the PMO and Trudeau’s deputy, Chrystia Freeland, anyway. Joly is the government’s fifth foreign affairs minister in six years. She did not attend the G20.

But implicit in the criticism among the Ottawa press corp – who can’t seem to get past Joly’s mercurial rise through cabinet – is that Joly is not ready for prime time. Worse, her appointment is a veritable middle finger to Canadians. Perhaps it’s the fact that most of those condemning her appointment are male that’s the problem.

It’s early days still, but judging by the backlash on Conservative Twitter, Joly may be emerging as fave target of sexist derision in Ottawa. It’s happened before with former environment minister (and later infrastructure minister) Catherine McKenna who decided not to seek re-election. Remember “Climate Barbie?”

Montreal MP Joly has had four other portfolios to her credit since her election in 2015 – heritage, economic development and official languages, tourism and the minister responsible for Northern Ontario. She is an Oxford-educated lawyer. She’s also a self-made politician. Before she was heavily recruited by the Grits in 2015, she came out of nowhere to run for mayor of Montreal and finish second.

When Trudeau made her his Quebec lieutenant it was a nod to her enthusiasm as much as her smarts and resilience after a decidedly rough start in the heritage portfolio. Many political observers, however, don’t see her political trajectory in quite that light. The rumour mill in Ottawa can be like that, especially for women in politics.

But she’s in good company. Joly’s appointment wasn’t the only questionable take by the conservative media on Trudeau’s cabinet. Anita Anand’s move to Minister of National Defence after a successful stint as procurement minister, for example, was announced by the National Post with this tweet (later deleted).

Looked at in the context of the PMO’s efforts for gender balance in the senior levels of the cabinet – and Trudeau strengthening his political hold on Quebec – Joly’s appointment makes more sense. She’s one of six senior ministers from the province. And now one of only four women to serve as Canada’s foreign affairs minister.

Hers is also a name that’s being talked about as a possible successor to Trudeau, whenever he decides to call it quits. Surprise. But you’d never know that from the early returns on her appointment.

But back to saving the planet for a sec. Trudeau announced in Glasgow on Monday that the feds will cap growth in the oil and gas sector to meet Canada’s climate objectives. It’s a big move that dares to make Canada a global leader on climate change. Maybe that will get Trudeau’s critics to not fixate so much on missing photo ops next time he ventures onto the world stage. But it’s more likely that it will only give them more reason to offer contempt.