NOW MagazineNewsIts anarchy in the streets of Toronto for cyclists

Its anarchy in the streets of Toronto for cyclists

A staggering 93 cyclists and pedestrians have been killed on Toronto streets over the past two years. As daily cyclists,. 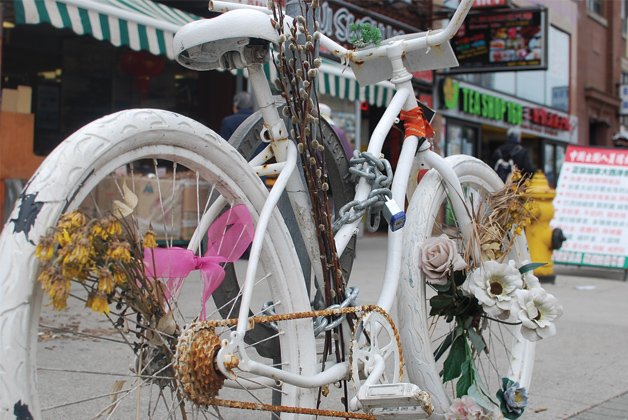 A staggering 93 cyclists and pedestrians have been killed on Toronto streets over the past two years. As daily cyclists, we are concerned for our safety and that of all commuters. As political scientists, we see a systemic problem a city government that is unable (or unwilling) to fulfill its most basic duty to protect its citizens, and the dangerous behaviour that results.

Poor infrastructure, weak laws and insufficient enforcement mean fatalities are inevitable. In the absence of an authority capable of creating and enforcing rules, these conditions are symptoms of what political scientists call anarchy.

One consequence of anarchy is self-help behaviour people fend for themselves because the government cant or wont. Anarchy and self-help behaviour incentivize winner-take-all decisions. We see this in the way cyclists and motorists are forced to compete over roadways, which are essentially ungoverned spaces.

When states work properly, citizens trust them to wield power to protect them. Functioning states collect revenue through taxes, then redistribute the wealth for the public good through things like the building of infrastructure. We call states weak or fragile when they dont fulfill these basic functions. Its safe to say that Toronto has failed when it comes to building infrastructure that protects its citizens.

Making it easy to break the rules leads to delinquent behaviour. Drivers have learned that police enforcement is close to nil. Anyone who commutes in bike lanes knows an intolerable number of delivery drivers consider them short-term parking spaces. Drivers show little care when making turns, and swerve into bike lanes to avoid congestion. They rarely face immediate consequences because collisions with cyclists only harm one party. Even in the worst-case scenarios, maiming or killing a cyclist leads to negligible sentences.

Cyclists regularly have to take matters into their own hands by shaming drivers, but such altercations can devolve into violence. And so, on the roads and in public discourse we see a typical tit-for-tat escalation and mutual dehumanizing.

Instead of negotiating over shared use of a public good, competition means turning drivers into cars and cyclists into bikes. Both consider the intentions and actions of their group as virtuous, and the others as vicious. Their behaviour toward one another is based on these mistaken beliefs. Extremism on both sides is a predictable outcome.

Drivers do what they can, and cyclists endure what they must. We face the choice of giving up or becoming more militant in our use of the public good to which we equally contribute, but from which we take far less.

To regain legitimacy, the city must make the rational choice of exerting its authority. The first, simplest step is to enforce existing rules. Toronto police and parking enforcement should embark on a blitz to catch and levy painful fines on those who park in bike lanes and are aggressive toward cyclists. CCTV cameras to monitor bike lanes and a policy of punishing offenders would go a long way toward changing behaviour.

Second, Toronto should stop pretending its cyclings problems are unique. Bike lanes without physical separation are mere lines on a road. They dont protect cyclists. The city should devote taxes to building curbs and surfacing bike lanes with materials appropriate for bicycles. Public pressure can help. Bike lanes in Holland, for example, came about after a rash of deaths in the 1970s led people to take to the streets en masse to demand safe infrastructure. Montreal is already miles ahead of Toronto.

An affluent city in which the act of riding a bike means our parents, partners, children and friends can die violent deaths is a travesty. A police force that wont protect us should be ashamed. A legal system that wont punish offenders is a farce. City councillors who wont allocate funds to protect lives should be pushed out of office.

Until the city asserts its proper authority, the act of cycling in Toronto will remain a nasty, brutish and deadly experience.

Craig Damian Smith and Jamie Levin are bike commuters in Toronto. They also hold PhDs in political science from the University of Toronto.