The trouble with Derek Sloan

The new boy wonder of the Conservative party's religious fringe is proving to be a growing problem for a party that after Andrew Scheer’s embarrassing election loss, was supposed to be undergoing a period of soul-searching 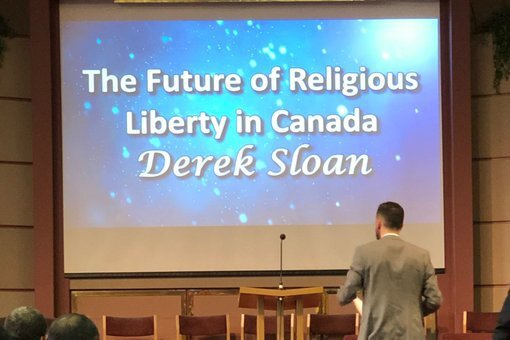 Conservative Party of Canada MP and leadership candidate Derek Sloan bills himself as a “Conservative without apology.” And true to form, he rejected calls this week to apologize for racially-charged comments he made suggesting Canada’s chief medical officer of health Theresa Tam is in the pay of the Chinese government.

Well, he didn’t actually put it that way, but that was the nub and the gist of his recent e-mail blast and video to supporters.

Late Wednesday, after news leaked that Ontario members of his own caucus had passed a motion to demand he apologize for questioning Tam’s loyalty, Sloan ramped up the rhetoric. The MP for Hastings—Lennox and Addington issued a statement on Twitter repeating his call for Tam to be fired for her (alleged) “mismanagement” of the pandemic. Sloan suggested that Tam’s actions (or inaction) are responsible for the deaths of Canadians.

Sloan now claims that he was only posing a “rhetorical question” when he asked in an email and video to his leadership supporters if Tam “is working for China.” He might as well have called her a spy. There have been a few conspiracy theories floating around about that now that it has come to light that Tam appeared in an NFB documentary in 2010 practically predicting this whole pandemic thing – at least, that’s the view of the wild bunch in the party whose main source of information is Rebel News.

These days, it’s Sloan who is their boy wonder. And he’s proving to be a growing problem for a party that after Andrew Scheer’s embarrassing loss in the last election, was supposed to be undergoing a period of soul-searching.

The need for the party to modernize and promote views more in line with multi-ethnic Canada, was self-evident to most in the CPC leadership after its dismal showing in Ontario and Quebec last fall. But then along claim rookie MP Sloan, another social conservative, to throw his hat in the leadership race and drag the party back into the cave. The fight for the psyche of the CPC is very much alive, despite Scheer’s imminent departure.

No one in Conservative ranks seriously believes Sloan is going to win the leadership (right?). In fact, there are those in his own caucus who think his attacks on Tam are partly an attempt to draw attention to himself.

Yes, it’s probably no coincidence that Sloan timed his attack on Tam a few days before the Conservative Party was set to lift the suspension it imposed on campaigning for the leadership race, which was preempted by the pandemic in late March. The controversy over his Tam comments, described as “racist and cruel” by county officials in his own riding, has afforded Sloan national headlines. It’s not the first time he’s garnered widespread attention for the wrong reasons.

When former Harper-era deputy Richard Decarie was barred by the party’s nomination committee from running for the party’s leadership in February for expressing the view on national television that being gay “is a choice,” Sloan was quick to come to Decarie’s defence.

For those who may not know it already, Sloan is a social conservative. But even that may be putting it mildly. He not only wears his religion prominently on his sleeve –  he’s opposed to abortion and gay rights – he’s promised to re-open the abortion debate and repeal amendments to the human rights code including gender identity and gender expression as grounds for discrimination.

Sloan, who was born in Norfolk County on the north shore of Lake Erie and is an avowed member of the Seventh-day Adventist Church, attended a private “liberal arts” college in California affiliated with the church. There Sloan served as president of the student association, which is probably why he also sounds more like a U.S.-style Bob Roberts (sans guitar) than small-c Canadian conservative. Sloan has made “freedom” a “guiding principle” of his leadership campaign which includes, among other things, entrenching property rights and the right to bear arms in Canadian law.

He’s also made no bones about his dismay over the way the party’s Leadership Election Organizing Committee (LEOC) has handled the leadership race, and stacked the deck, as it were, in favour of the presumptive frontrunner Peter MacKay. Sloan is calling on the party to delay the vote, which has now been extended to August. That would be bad news for MacKay, whose bedevilling bad performance – he’s been consistently off the mark – has thrown a wrench in his coronation. The more he opens his mouth, the more some in the party must be asking themselves if this guy has what it takes.

If it wasn’t clear before, it is now. This is not going to be a cakewalk for MacKay. And while Sloan may not be fixing to win in the books of most Ottawa pundits and members of his own party – most figure he’s already put himself in the running to crown the eventual victor. But who knows? He’s already causing his opponents to tack further right.

Those who thought Scheer’s resignation would somehow magically disappear the religious right in the party were wrong. If anything, the so-cons are back with a vengeance, only this time they have a true believer to take them to the promised land. Scheer wore his religion on his sleeve, too, but not so comfortably. He has always been too mealy-mouthed about that, was the knock in his base.

Not so Sloan. Read the Twitter threads. He’s a rock star to those in the party who despise the so-called “liberal lites” in their ranks who are afraid to speak out against “cancel culture.” It’s a big theme for Sloan who clearly enjoys carrying his so-called unapologetic brand of conservatism like a chip on his shoulder.

It’s not what the country (or party) really wants – or needs – right now. The polls tell us that. But Sloan doesn’t have to convince the country. He only has to convince his party. And right now it’s as divided as ever on the question of what direction it should be headed.