Ahead of the March for Mental Health, Toronto organizers demand more action over awareness, especially for marginalized youth 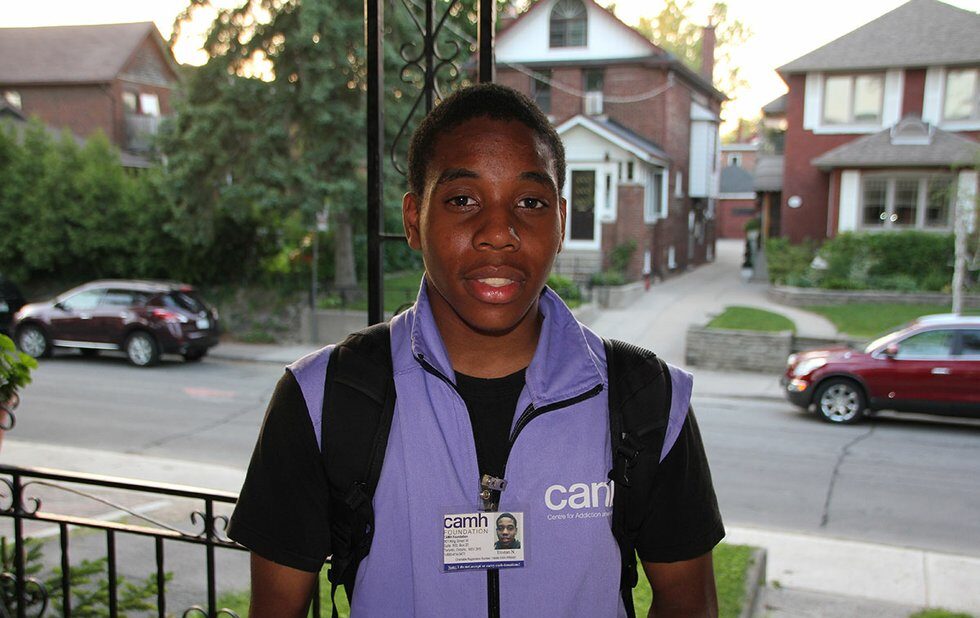 Frustrations over what some advocates are calling cutbacks to Afrocentric mental health services in Toronto came to a head last week in a town hall meeting in Scarborough. One by one, parents of Black youth stepped up to the microphone to share their experiences and voice their concerns over the lack of funding for programs.

“We heard from a parent who spoke about basically having to refuse to leave the hospital because they were treating her 21-year-old son as just an angry Black man,” recalls Janelle Skerritt, a Black mental health advocate who moderated the town hall. “But she kept saying it was unusual for him, that he was having an episode.

“Another mother,” Skerritt continues, “had to literally call the police to get help for her son. Often in our community, the young men in particular only get attention after being involved with the law. She was desperate.”

Scarce resources have left an overworked system trying to play catchup with growing demand. Frank Van Nie, who sits on the board of the Canadian Mental Health Association, is disappointed in the lack of mental health services in Canada. Last fall, his growing frustrating peaked during a conference in Toronto that, yet again, focused on awareness over action.

“It just hit me that we need to do something. We need to act,” he recalls. “What we need is for average people in the community to come out on the street and tell the government.”

That’s why Van Nie organized the March for Mental Health on May 6, calling on all levels of government to increase funding and services for mental health care in Canada. It starts at Nathan Phillips Square at noon and ends at Queen’s Park.

The most pressing concern, according to Van Nie, is the lack of money being spent on mental health services in the country. Even though the federal government has pledged a $5 billion increase to support programs and initiatives over the next 10 years, with $1.92 billion going to services in Ontario, that only amounts to roughly $14 per person per year.

“Canada is behind most other Western countries, including the UK and Australia, when it comes to spending public health care dollars on mental health,” Van Nie says. “Services are just not there, and it’s very frustrating.”

The services that do exist are disjointed. A patient may have to consult a family doctor or visit a drop-in clinic first to get a referral to a specialist. Navigating treatment options including psychiatry and psychotherapy can feel like wandering a maze, and costs, many of which aren’t covered by the Ontario Health Insurance Plan (OHIP), vary. Wait times can run up to 18 months, and in non-urban areas resources are even scarcer.

A 2014 study published by Open Medicine found that although the number of doctors in Ontario trained in psychiatry has increased by 80 per cent, wait times have remained relatively unchanged. In Toronto, which has the highest number of psychiatrists per capita in Ontario, 10 per cent of full-time psychiatrists see fewer than 40 patients a year.

“There’s nothing that encourages these mental health care providers to work together,” says Van Nie. “Most of them are so busy with more clients than they know what to do with. They certainly don’t have time to create a system, so everybody is just left to find some way to get help on their own.”

While a number of annual campaigns including #BellLetsTalk and One Brave Night, a fundraiser for the Centre for Addiction and Mental Health (CAMH), have increased awareness about the prevalence of mental illness in Canada, that’s not enough, Van Nie argues. Projects that reduce stigma and tell people, “It’s okay to get help,” have left more Canadians than ever seeking mental health care.

“A system that already doesn’t have enough resources is just going to destruct even further,” he says. “We really have a two-tier mental health care system in Canada. If you have money and connections, you can get help. That’s what I did for myself. I could afford it and I had connections, so I could see a psychiatrist. Many people don’t have that opportunity.”

The March for Mental Health is part of Mental Health Week, with a week of events from on May 1 to 7. The national campaign organized by the Canadian Mental Health Association even comes with a statement from the prime minister vowing to continue building on Indigenous-focused programs such as the First Nations Mental Wellness Continuum Framework and the National Inuit Suicide Prevention Strategy.

Indigenous communities are disproportionately affected by mental illness due to social, economic and historical factors, and suicide rates are up to seven times higher for First Nations youth than for non-Aboriginal youth.

Many other marginalized communities lack access to mental health care in Canada. In Toronto, a program at CAMH geared specifically toward Black youth has continued to suffer funding and staffing issues, according to community organizers. Last year, news that the Substance Abuse Program for African Canadian and Caribbean Youth (SAPACCY), which launched in 1999, was on the verge of closure triggered a series of town hall meetings within the Black community. There are still no answers or viable solutions forthcoming, so around 80 concerned citizens and mental health advocates met last week in Scarborough.

“When SAPACCY first started, it had a very high profile within the community,” says Floydeen Charles-Fridal, a spokesperson for the SAPACCY Community Coalition. “Its staff were within the community, there was community organization and consultation, and there was a cultural competence in working with African and Caribbean Canadian youth.”

In 2016, the program reportedly only had only one staff member. According to CAMH, SAPACCY is currently directed by a manger who oversees two social workers.

While the number of clients enrolled in the program has nearly tripled in the past five years, funds allotted have held steady at $300,000 over the past decade. Charles-Fridal, who has experience as a front-line mental health worker, says these changes point to anti-Black racism within CAMH and Canada’s health care system.

“When we see a program that was so robust and effective being systematically diminished, we recognize that as anti-Black racism,” she says. “It’s about privilege and power.”

A statement sent to NOW by CAMH acknowledges that anti-Black racism has led to discrimination within Canada’s mental health care system, but the facility is committed to equity and finding a common path forward. According to CAMH, changes made to SAPACCY in 2015 were an attempt to provide racialized youth with more options for treatment and augment existing SAPACCY services within CAMH.

However, members of the SAPACCY Community Coalition don’t see it that way. They describe the move as a dilution of culturally sensitive treatments, ones that are vital to Toronto’s African and Caribbean communities.

“We know that when people go into places where they see people who look like them and speak like them, they’re more likely to get help,” says Charles-Fridal, who adds that in her own work as a mental health supporter, there have been times she has spoken in dialect to reach a person.

“Most of us are like the walking wounded,” he says. “We might have depression, but CAMH and a lot of other organizations see people with schizophrenia, psychosis and things like that.”

“When you look at all the people who die from various things, there are more who die from suicide. It’s buried and hidden,” says Van Nie.

All will be out in the open on May 6 at the march. So far, nearly 300 people on Facebook have committed to going, with another 900 interested. Van Nie says many more people not on social media are eager to demonstrate.

Some members of the SAPACCY Community Coalition will likely attend. Charles-Fridal and Skerritt say they’re eager to meet with CAMH, the Ministry of Health and the Ministry of Children and Youth Services – whatever it takes – to ensure that SAPACCY is strengthened and a comprehensive strategy to address Black mental health issues is developed.

“We are losing young people and Black folks across this province at exponential proportions due to mental illness,” says Charles-Fridal. “We’re not going away until we have answers and solutions. It’s that simple.”