NOW MagazineNewsDinner With A View: Toronto’s middle finger to the poor

Dinner With A View: Toronto’s middle finger to the poor

Anger and contempt: protest of chi-chi dining pop-up under the Gardiner exposes the ever-widening fault line between haves and have-nots 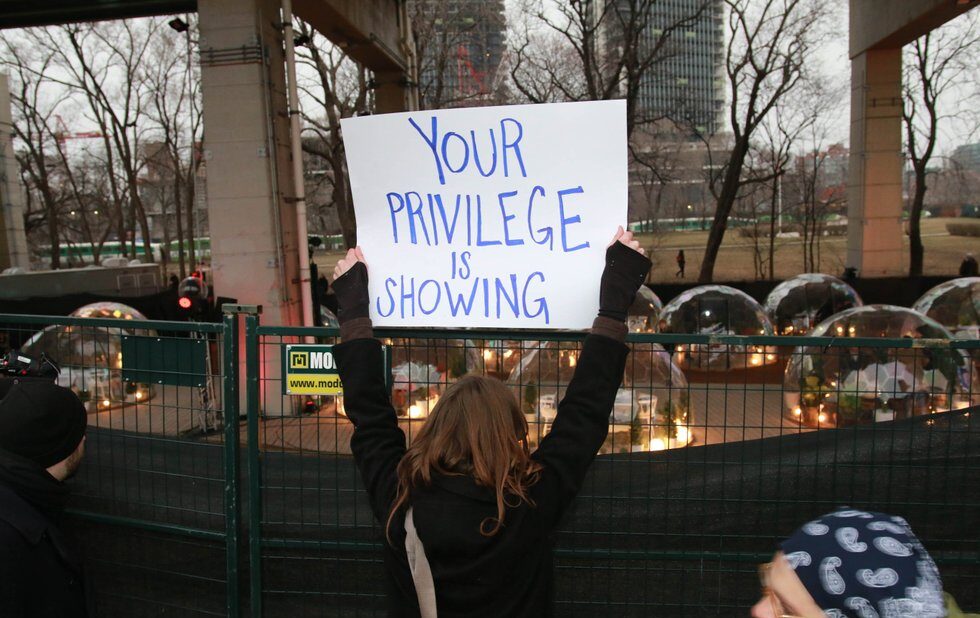 Most of the 300 or so people who showed up to protest the swishy Dinner With A View dining pop-up under the Gardiner on April 5 are long gone. But the angry sound from the drums of Rhythms of Resistance, the samba-inspired collective that plays for social justice, continue to resound in the night, ricocheting off the concrete pillars soaring over the Bentway.

But the “part pop-up restaurant, part outdoor oasis” offering up $100-a-plate dinners inside heated geodesic domes (reserved for an additional $149 and a short distance from where a tent city of homeless people was evicted last month) only serves to expose the widening fault line between haves and have-nots in the city.

The domes, each an illuminated “living biosphere,” sit like intergalactic pods waiting for lift-off behind a steel security fence lined with a black curtain for privacy. Swaths of the curtain come down when people gathering for the Ontario Coalition Against Poverty’s (OCAP) protest, called Dining With A View – Of The Rich, begin rocking the fence to reveal the diners in their bubbles.

The sarcastic outburst of applause from demonstrators that follows is met with equally contemptuous clinking of the wineglasses of a few of the diners who toast the protestors.

“I’m repulsed that somehow we are not all offended and enraged,” says Sarah Shartal, a lawyer who works with people who are marginally housed.

“It tells us something about the state of our city, who feels welcome, who feels safe, who has power and in this case, who profits,” says Ryan Hayes, a researcher with Workers United Canada and one of the featured speakers at the protest.

“Dining in a bubble for people who live in a bubble,” offers another demonstrator.

But in the battle of sound systems, dinner music for patrons in their domes is overpowered by OCAP’s speakers booming out Phil Ochs’s 1966 anthem, Ringing Of Revolution: “And the merchants of style, with their red velvet smiles….” 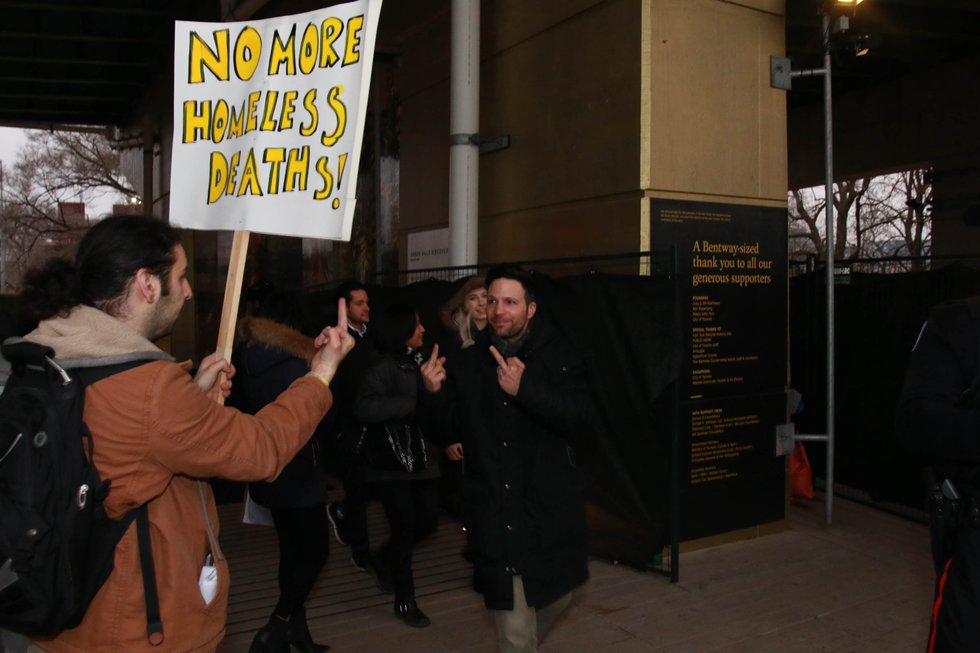 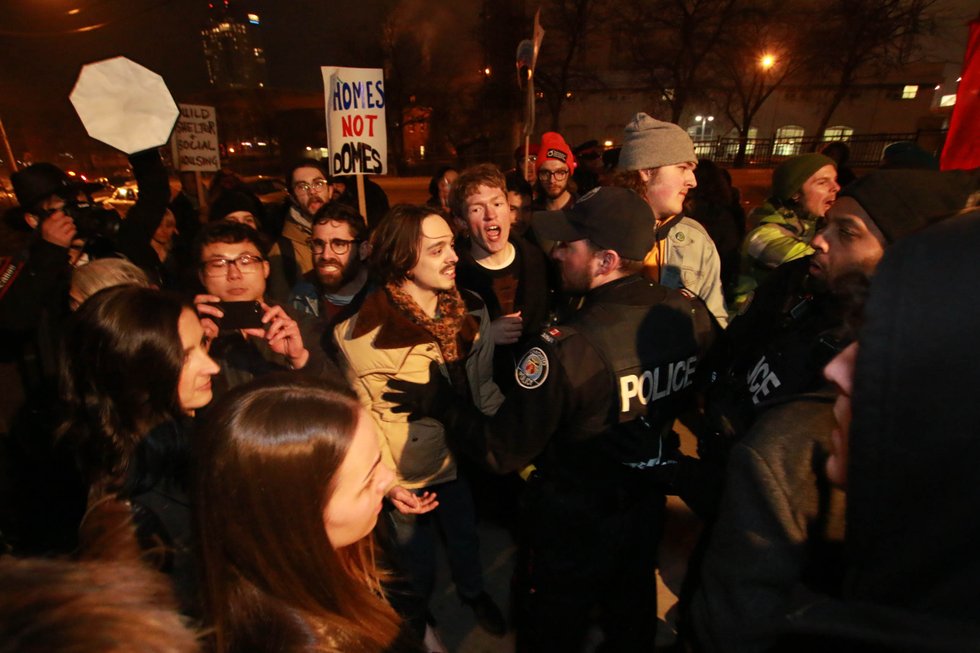 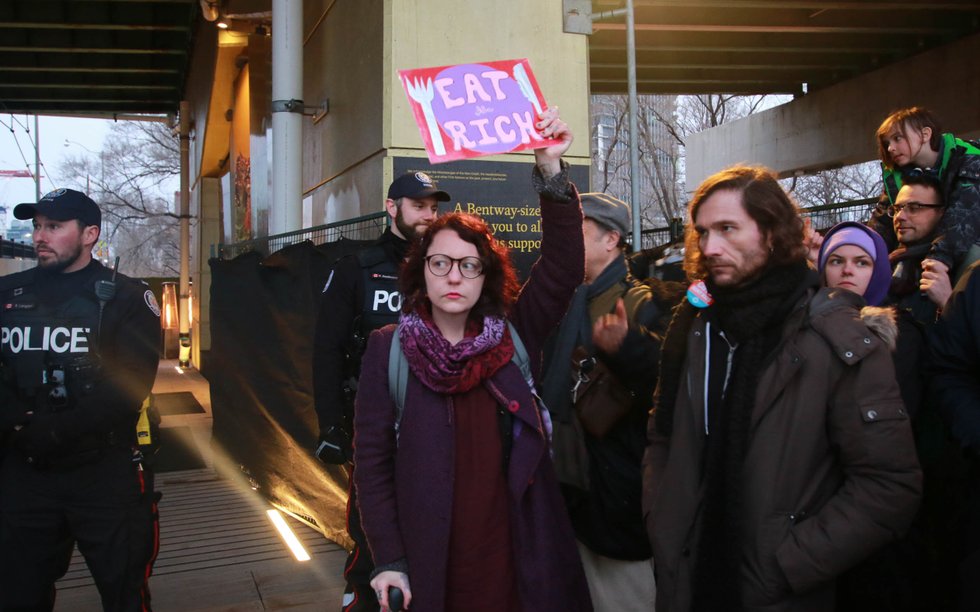 Meanwhile, at the busy Strachan Avenue entrance to the domes, police are escorting patrons past protestors who are banging pans and shouting “Shame on you!” Placards that read “Your privilege is showing” and “You’re being pretty shitty” are hoisted above the crowd. Safely inside, one of the patrons turns to face protestors and holds up both middle fingers.

OCAP organizer Gáetan Héroux says the decision to protest the event reflects a deep-seated anger over growing inequalities in our city. Says Héroux, “Like hell you’re going to flaunt your wealth in front of us while we suffer.”

On the grassy knoll overlooking the domed encampment, James Cushing, a retired union activist with the Ontario Public Service Employees Union joins the crowd in giving a collective middle finger to those in the domes below.

“It’s pretty disgusting that this takes priority for the city over homelessness,” he says. “That upsets the hell out of me.” On this side of the fence, volunteers are serving up their own dinner – samosas, roasted vegetables, cold-cut sandwiches and chocolate cake – to a long lineup of supporters.

Zoë Dodd, an organizer with the Toronto Overdose Prevention Society (TOPS), delivers the most poignant speech of the night.

TOPS, a collective of volunteers who opened the first overdose prevention site 18 months ago in response to the opioid crisis – saving hundreds of lives – now finds itself fighting the Ford government, which wants to shut them down.

“We cannot just be on our Facebook pages and on social media or be at rallies,” Dodd says. “We need to be seriously organizing because our earth is fucking dying, and people are living in arenas.”

She nods in the direction of the Fort York Armoury nearby where the city temporarily warehouses homeless people during extreme cold weather alerts. “We can’t pay our rent and our province is being destroyed by cuts. And fuck the audacity of these motherfuckers eating here in their domes. I hope they’re uncomfortable.” 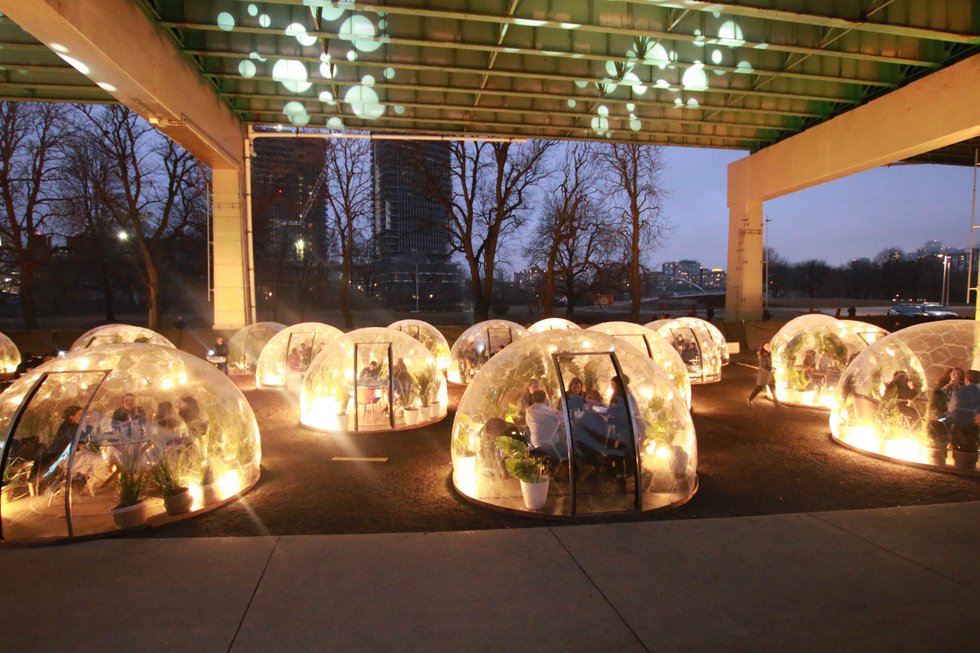 Reverend Maggie Helwig, pastor at Saint Stephen-in-the-Fields in Kensington Market, is leaning on her bike, taking it all in and contemplating “the appalling symbolism.”

Helwig gave a deputation in February to the city’s Housing and Planning Committee in support of councillor Kristyn Wong-Tam’s call to declare housing an emergency and human right. At the time, Helwig also called out Mayor John Tory’s Housing Now affordable housing plan for not including nearly enough rent-geared-to-income units.

“I’m sure most of the people who signed up for this (Dinner With A View) don’t need to think about people dying in the cold,” Helwig sighs.

Bentway Conservancy co-executive director David Carey offers the following in an email response to questions from NOW about the symbolism surrounding the event: “The Bentway is a new public space that is operated, maintained, and animated as an independent charity. Like other charities, the Bentway relies on a diverse set of funding sources, including occasional third-party rentals, like Dinner With A View, to sustain our year round operations and programming.”

On whether the organization has second thoughts given the public outcry, Carey says that, “The events last week raised some important questions that we as an organization will reflect on as the Bentway continues to grow and evolve. The Bentway needs to be a part of this conversation. We are not experts in this realm, but we do want to learn and find a way to contribute to solutions.”

A spokesperson for Dinner With A View says organizers were not involved in the city’s decision to clear out the nearby homeless encampments last month. “We’ve seen people coming down on both sides of OCAP’s protest. Our mission was to create a cool cultural experience in the city.”

Back at the Bentway, more than an hour after protestors have left, Rhythms of Resistance is pounding out syncopated sounds to chants of “Eat the rich, feed the poor.” The slogan on the side of one of the instruments reads, “Respect existence or expect resistance.”