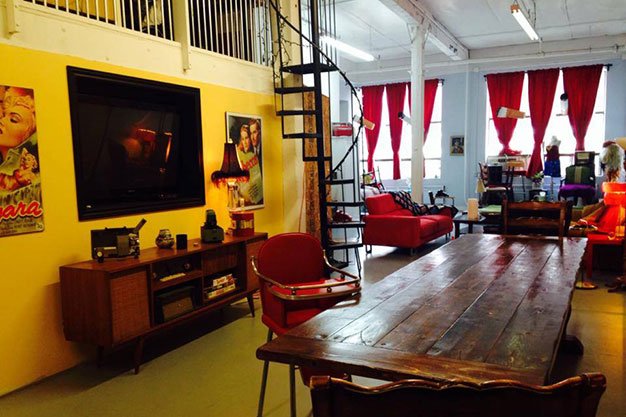 Leslieville resident Shelley Marshall uses her home as a mental wellness space that's open to the public twice a week.

Eighteen years ago, Shelley Marshall attempted suicide. The writer, performer and mental-health advocate survived, but when it came time to get help, she felt like resources were limited. She wasn’t welcome into a suicide survivors group because her illness wasn’t deemed severe enough. She tried another group for children of survivors (Marshall’s father died by suicide), but also had trouble getting in. After an eight-month wait, she was finally admitted into a program at CAMH.

“I was in bad shape, and the group was for women living with trauma and anxiety disorders,” Marshall recalls. “When I arrived, there were 15 of us in an eight-by-10 [foot] room. The doors locked behind us and there were buzzers constantly going off outside. I thought, ‘What the fuck am I doing here?’”

Marshall’s experience with the healthcare system isn’t unique. Long wait times, costly fees and overall dissatisfaction with what’s offered has forced a lot of patients to take matters into their own hands. Toronto has seen an explosion of unusual therapy spaces, online communities and DIY solutions made by and for people dealing with mental health issues.

Marshall, who suffers from post-traumatic stress, severe panic disorder, anxiety and suicidality eventually wrote and performed a one-woman show exploring her struggle with mental illness called Hold Mommy’s Cigarette. More recently, she began opening her home to help others – a DIY mental health space in the Leslieville loft she shares with her husband.

“I think we need to have places where people can go and work on their mental wellness, kind of like a mental wellness spa,” Marshall says. “Exercising your mind can be as simple as paper mâché, colouring, playing guitar or playing volleyball with a balloon and laughing.”

Marshall’s DIY space functions as a drop-in twice a week. She serves light refreshments and provides materials needed for activities, like colouring or making crafts. The sessions are free to attend, although donations are welcome, and the program is funded by performances of Marshall’s play through a donation program called Play It Forward.

When a person is diagnosed with a mental health issue in Ontario, they have several options for treatment. They might require the help of a psychiatrist, a medical doctor able to prescribe medication. Psychiatric treatment is covered by the Ontario Health Insurance Plan (OHIP), but even though the number of doctors in Ontario trained in psychiatry has increased by about 80 per cent, wait times are still long.

A 2014 study published in Open Medicine found that in Toronto, there were 63 psychiatrists per 100,000 people. Comparatively, in non-urban areas in Ontario, that number dropped to seven per 100,000. Perhaps the most interesting finding in the study was that more psychiatrists didn’t equate to more access for patients. In Toronto, which had the highest number of psychiatrists per capita, 10 per cent of full-time psychiatrists saw fewer than 40 patients a year.

“This research clearly shows that increasing the number of psychiatrists in Ontario is not the solution,” said Benoit Mulsant, who co-authored the study and is the physician-in-chief at Centre for Addiction and Mental Health.

Another option is to see a psychologist, someone who has a university degree, lots of training and is registered under the College of Psychologists of Ontario. While wait times might be slightly shorter with psychologists, they cannot prescribe medication to patients and their services aren’t covered by OHIP. The Ontario Psychological Association recommends an hourly rate of $225.

The quickest option for treatment is through another type of healthcare professional, such as a psychotherapist. Therapists graduate from private programs and specialize in different types of treatments. According to the Toronto Therapy Network, therapists charge between $125 and $175 per session. This cost isn’t covered by OHIP, but as of January 2016, fees paid to registered workers can be claimed on personal income tax returns.

“The economic gap and people feeling like they aren’t able to financially go see a psychiatrist or therapist is the biggest issue in the group,” says Richard KC, who started an online DIY mental-health space called Bunz Mental Health Zone in 2016. “Even if they are able to afford it, our system is so bloody flooded that wait times are extreme.”

The group, which operates using Facebook, is a spinoff of Bunz Trading Zone, the Toronto-grown community and app that allows users to barter and swap goods. Richard wanted to create a safe space where members could talk about mental-health challenges. In a year, membership has surpassed 4,500 people.

“I think we offer a space where people can feel less isolated. It’s almost like coming out of the closet for some people,” he explains.

Members post openly about a range of issues, from dealing with self-harm or suicidal thoughts, to asking for opinions on specific antidepressants. The community typically chimes in, offering comfort and advice, and online administrators are there to monitor comments.

“A lot of members tell me that even just seeing people open up is comforting to them. Not everyone has to participate openly,” Richard adds.

The site’s administrators aren’t certified mental health workers. Richard’s experience includes completing an arts degree in equity, race and healthcare, as well as watching one of his own family members suffer from mental illness. Another moderator is currently in school for social work, which touches on mental health.

“A lot of people misinterpret what we do,” Richard says. “We’re not outreach workers or counselors. We try to direct people in the right direction if they ask for it.”

He says one of the outcomes of Bunz Mental Health Zone has been members creating their own spinoff support groups. In the past, members have also promoted their own DIY efforts, such as weekly meetups at Trinity Bellwoods Park and a knitter offering a knitting therapy workshop. Richard sees the group as a proactive approach to mental health, helping members find small solutions outside the medical system.

When NOW reached out to CAMH for comment about the rise of these DIY mental health spaces, we were told they don’t have a formal position on the matter. While wait times to join support groups at CAMH can be long, they do have a 24-hour emergency department providing assessment and treatment for adults at their 250 College location. Last year, CAMH announced three new walk-in clinics geared towards youth that offer therapy, peer support and access to psychiatric services.

Still, as a preventative measure, more people are seeking DIY-oriented solutions to mental wellness. From the rise in yoga retreats, mindfulness classes and meditation apps to online movements like #TalkingAboutIt, where Twitter users talk openly about living with mental illness, self-help is as popular now as it was in the late 20th century. The difference now is that by talking more openly about mental health and finding help in each other, we’re reducing the stigma around mental illness.