Rod Phillips is under fire for going on a personal vacation in St. Barts while the government advises people not to travel 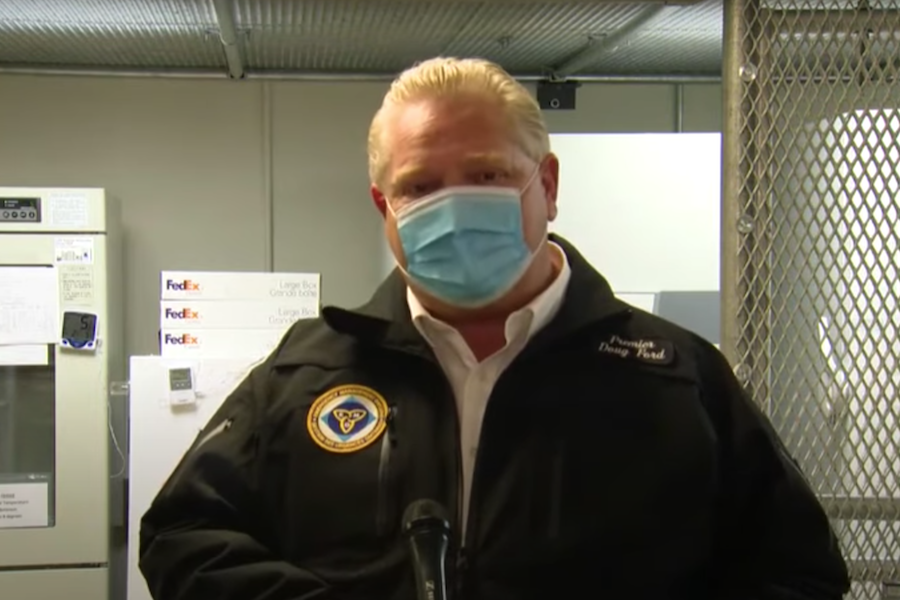 Speaking to reporters at Trillium Health where the Moderna vaccine will be distributed in Peel Region, Ford admitted he found out about the minister’s vacation, which has sparked public outrage, two weeks ago.

“I’m very upset. I’m very frustrated with the situation,” the premier said, adding Phillips is due back in the country tomorrow.

“He never told anyone he was leaving. He never told me he was leaving. I did call him shortly after he arrived and I talked to him and asked where he was,” Ford explained. “He said he was away, said is this going to be an issue? My mistake, and I take full responsibility. At that time, I should have said get your backside back into Ontario and I didn’t do that.

“I stand out here every single day and tell people to stay at home. People are losing their businesses, we’re locking things down and it’s unacceptable that anyone, any elected official, myself included or anyone, gets off and ignores the rules and goes down to an island,” Ford added.

Ford’s comments today follow an earlier statement sent to media outlets on Tuesday evening in which the premier said he was “not aware of the minister’s trip” until after Phillips was already out of the country.

In a statement to press on Tuesday, Phillips has said he and his wife went to the Caribbean island of St. Barts in a “previously planned” vacation on December 13 after the legislative session ended.

He added he would have cancelled the trip if he had known of the province-wide shutdown on Boxing Day was going to take effect.

“I deeply regret travelling over the holidays. It was a mistake and I apologize,” he said.

The vacation has sparked anger as public health officials at all levels of government advise Canadians to stay home as much as possible and only travel for essential reasons.

There are no rules prohibiting Canadians from travelling internationally during the pandemic. On Wednesday, Ottawa announced air travellers entering the country will soon require proof of a negative COVID test.

Meanwhile, public health officials in Toronto warned of a post-holiday surge is expected in January as the city confirmed new infections had crossed the 1,000 mark for the first time.

It’s #ChristmasEve. To my constituents in #Ajax & people across Ontario, all the best during this special time of year. Even as COVID-19 changes how we celebrate, we should reflect on what makes Christmas so special to us – including family & the act of giving. #MerryChristmas! pic.twitter.com/AX7hKWA88n

Not to get too sappy, but when you boil it down the best way to celebrate is with a stack of flapjacks & a bottle of real #CanadianMapleSyrup. I picked up this bottle from #Ajax‘s local MacMillan Orchards. pic.twitter.com/4iL8UXMOoB

Ford was also asked about a series of tweets sent from Phillips’ Twitter account in the days following his departure that give the impression the minister was at home in his Ajax riding.

His office has since confirmed the photos and videos were taken prior to his departure.

“This is unacceptable. We’re supposed to be the leaders,” Ford said. “We can’t have a rule for one group of people, snub the rule and go do something else. I’m concerned about the videos as well on social media.”

“Everyday folks were separated from aging parents during the holidays. They’ve missed nearly a year of birthdays, first steps or other milestones for grandbabies, nieces and nephews. And they’ve cancelled their dream vacations, destination weddings and trips home,” she wrote in a statement.

“Asking regular people to sacrifice while Ford’s insiders live the high life is wrong, and it has to stop.”