When the Premier says things like, “There is no place in Ontario for anti-Semitism,” it’s hard not to feel a little sick to your stomach 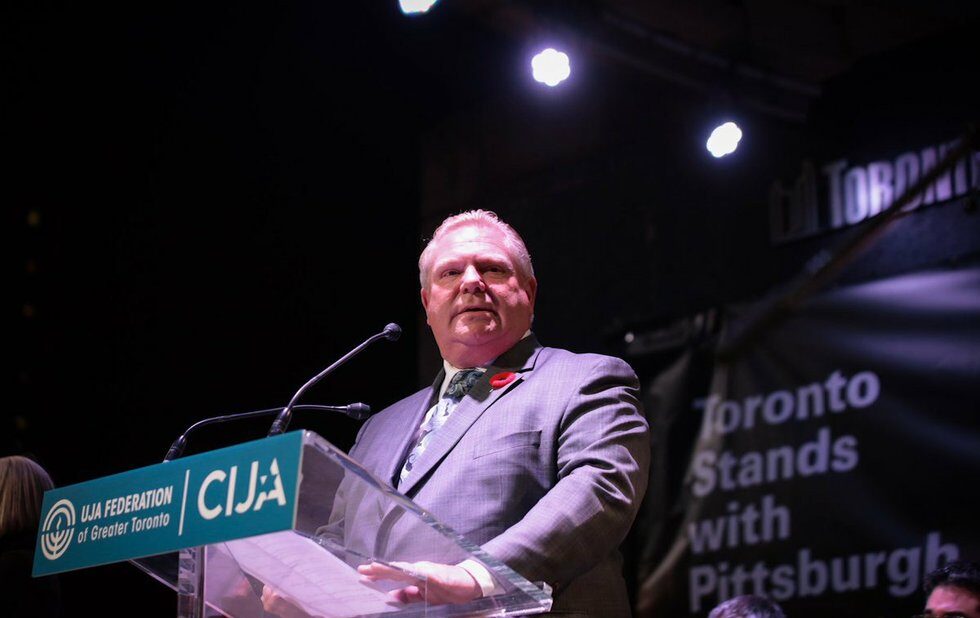 Doug Ford said all the right things about the need to stand together against hatred in all its forms" at October 29 vigil at Mel Lastman Square for victims of the mass shooting at a Pittsburgh synagogue.

When Doug Ford says things like, “There is no place in Ontario for anti-Semitism,” as he did on Monday in response to what looks like an anti-Semitic incident in the city’s north end, it’s hard not to feel a little sick to your stomach. Ford is slippery that way. On the one hand, he presents himself as premier “For The People.” On the other, he’s a Donald Trump knock-off in a cheaper suit spreading his own brand of white lies north of the border.

According to police, four 17-year-olds in religious attire were walking near Bathurst and Lawrence when they were kicked and punched by another group making “derogatory comments about their religion.” A pair of sunglasses was stolen from one of the victims. One suspect has been arrested and other suspects still being sought are described by police as being in their early teens.

I know the area well. It’s home to one of the country’s largest Hasidic communities. I live just up the street and on any given evening you can see men, women and young people making their way to one of the synagogues, or Hebrew day schools that double as synagogues along Bathurst.

The Centre for Israel and Jewish Affairs has issued a statement saying it is “deeply disturbed” by the incident. “Jewish Canadians should never fear wearing their Kippah in public,” says CIJA’s VP Noah Shack.

Anti-Semitic incidents are on the rise across the country. And both Toronto police chief Mark Saunders and Mayor John Tory have weighed in on Twitter to express their outrage and offer assurances that hate-motivated violence and harassment will not be tolerated.

And then there’s Ford. On top of his “there is no place for anti-Semitism” line, he offered that his government “will not tolerate hatred of any kind.”

Ford made similar remarks at the #TogetherAgainstAntiSemitism vigil organized by CIJA at Mel Lastman Square a couple of Mondays back in support of the families of victims of the October 27 mass shooting at a synagogue in Pittsburgh. Eleven worshippers were killed and seven others injured in what’s being called the deadliest attack on the Jewish community in U.S. history.

Ford said all the right things back then, too, about the need to “stand together against hatred in all its forms.

“Ontario has built itself on an openness that I am truly proud of,” Ford said. “We have built this province to not only accept differences but embrace them.”

The contradiction was not lost on the assembled, some of whom booed when Ford was called to the podium.

It was a different Ford than the one who had posed only a couple of weeks earlier for a photograph with fringe mayoral candidate Faith Goldy, whose views on the so-called “Jewish Question,” are well-known.

Not only did Ford fail to distance himself from Goldy, he refused to denounce her views when opposition MPPs called upon him to do so in the Legislature.

As Karen Mock, a former national director of the League for Human Rights of B’nai Brith Canada, asked in our October 11 issue: “Why is it so hard for Doug Ford to say Nazis are bad?” It’s a good question.

It was not long ago, for example, that Goldy was promoting the writings of Romanian fascist Corneliu Codreanu.

The truth is that Ford trades in a similar far-right rhetoric. And the PC party he now leads harbours some of the same fringe elements Goldy speaks to.

All you had to do was scan the crowd at the recent Ford Fest: there were a lot of Goldy supporters among the Fordists wearing variations on Trump’s “Make America Great Again” hats and other paraphernalia.

Which is probably why Ford seemed to have no problem with Goldy invoking his name in robocalls in support of her mayoral bid during the municipal election campaign. She said she was the only candidate who would stand “shoulder to shoulder” with Ford.

The Ford connection had the desired effect. Goldy counted some 25,000 votes in total, finishing third behind Tory and Jennifer Keesmaat. And it was in Ford’s backyard in Etobicoke where Goldy enjoyed her highest returns. A coincidence? It seems trite to ask.

Ford doesn’t like the Trump comparisons. He likes to think he was Trump before there was a Trump.

He has done Trump one better when it comes to dealing with detractors in the media. He has his own propaganda arm, Ontario News Now, presumably to inoculate his supporters from the “fake news” being spread by mainstream media.

But there is no escaping the similarities. “Lock her up” chants have become commonplace at Ford rallies whenever the name of Kathleen Wynne is invoked. Ford, too, has adopted the free-speech mantle of the alt-right, ordering post-secondary schools to adopt free speech policies or face funding cuts.

And like Trump, Ford has done his part to turn up the temperature on the anti-immigrant animosity, joining his federal cousins, for example, in attacking the so-called “immigration mess” caused by asylum seekers entering Ontario.

But it’s on issues of race and anti-Semitism that Ford is treading on slipperier ground.

Like his American cousins in Republican ranks, Ford’s PCs are staunch Israel supporters. Yet, there are pronounced far-right elements in the conservative movement that promote anti-Semitic views.

It’s worth remembering that the guy Ford put in charge of the anti-racism file, former Minister of Community Safety and Correctional Services, Michael Tibollo, showed up for a tour of Jane Finch neighbourhood shortly after the PCs took office wearing a bulletproof vest.

More to the point, one of Ford’s first moves when he came to power was to cut funding for the province’s Anti-Racism Directorate and disbanding various advisory committees, among them, a committee on anti-Semitism.