NOW MagazineNewsWhat does Doug Ford have against the poor?

What does Doug Ford have against the poor?

When Ontario’s basic income pilot project ends on March 31, more than 4,000 participants will be plunged back into a dysfunctional welfare system that penalizes them for simply being poor 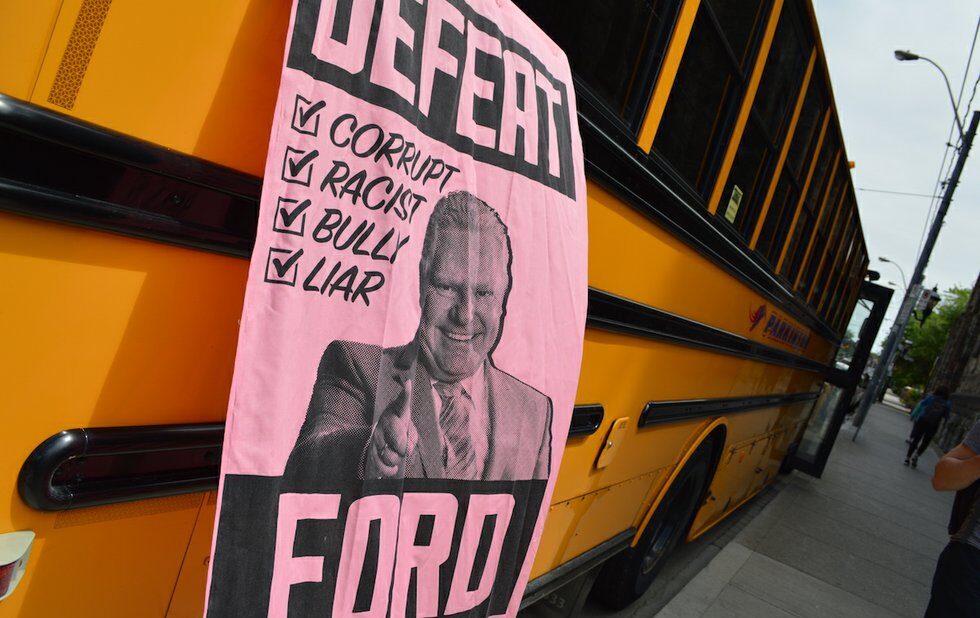 Brian Russell had $40 left in his pocket when he was one of 4,000 people selected for Ontario’s basic income pilot project.

“Your life is better,” he says.  “I had better food and money to travel around the city. My life was more stable and secure.”

For Joan Frame, basic income payments from the province meant she no longer had to borrow from friends to make it through the last few days of the month. Frame says she was always juggling bills and that basic income gave her back power over her life.

“I don’t know if you’ve ever been in a situation where you need to ask for money, but it is impossibly difficult,” she says. “It was the worst part about being on any kind of assistance for me.”

But the project is set to end on March 31, plunging participants and their families across the province back into a dysfunctional welfare system that penalizes them for simply being poor.

Doug Ford’s government cancelled the project, launched by the Liberals under Kathleen Wynne, claiming that some 25 per cent of participants were either dropping out or failing to meet basic obligations, such as filing their taxes.

In fact, the project was achieving its goals of improving food and housing security and mental health, as well as access to education, training and employment while reducing demands on the provincial health care system.

We know this not just from data that was collected, but from the testimonials of participants who say receiving basic income ($17,000 per individual or $24,000 per married couple) was markedly changing their lives.

Frame, in fact, decided to go back to school, but that turned out to be short-lived when she was blindsided again by the Ford government’s cuts to post secondary education two weeks into her midterms.

The Ford government, she says, seems intent on “systematically chipping away at members of society that are the most vulnerable without really thinking about the impact.”

Before launching the basic income pilot, the Wynne government consulted Ron Hikel, the executive director of the original Mincome project in Dauphin, Manitoba, which was implemented from 1974 to 1978 by NDP Premier Ed Schreyer and Liberal Prime Minister Pierre Trudeau. That experiment was ended when Progressive Conservatives came to power provincially. As in Ontario today, the claim back then was that basic income was not doing much to help people out of poverty.

But about 10 years ago, health economist Evelyn Forget of the University of Manitoba found some 18,000 boxes of research from the project that had been collecting dust in a warehouse. Now, filmmaker Ken Fisher has combined Hikel and Forget’s expert knowledge with the experiences of four participants from the Manitoba project to create the 20-minute documentary, The Manitoba Story: A Basic Income Film. (Fisher and his team have also designed a free and open source game to help others explore their own relationship with money as well as their understanding of basic income.)

Participants in the film include Eric Richardson, who was in sixth grade when his parents began receiving Mincome payments. As a result, Richardson was able to go to the dentist for the first time in his life and have 10 cavities filled.

Now a college instructor in carpentry, Richardson says his choices in life would have been severely restricted without Mincome. Had his family not received a basic income, he says, he would likely have had to quit high school.

Susie Secord tells a similar story. Secord dropped out of school at 17 because she was pregnant. Receiving Mincome meant she could take care of her child while earning her high school diploma. She was able to go on to university, land a good job, buy a house and raise three children. Secord is now paying it forward by ensuring others in her community have opportunities to better their situations.

Clark Wallace was part of a farming family that just never seemed to earn enough to get ahead. Mincome enabled Wallace’s father to purchase a new truck to take the community’s lambs to market. This gave the family the financial hand-up it needed to expand into horse farming.

Forget, who has devoted a significant chunk of her research on ways to make the health care system sustainable, says there is enough data from Mincome projects around the globe “to support the idea that we need to start investing upfront to ensure people have the resources they need to take care of themselves and their families.

“We’ve been experimenting with basic income for the past 40 years,” she says. “The results are always the same – people who receive a basic income are happier, healthier and less likely to need the support of other social programs. They are financially more stable and are in a better position to make long-term plans.”

Hikel says successful basic income programs in the U.S., including the Manpower Demonstration Research Corporation in New York City, and others in Europe, have not received the attention they deserve, while failures have tripped up several attempts to build a basic income program.

Forget hopes that when people watch the documentary, “They recognize that the people who benefited from Mincome were people very much like themselves and their families.”

Russell and Frame would agree. For Frame the personal has become political.

“It’s about survival. People get desperate when they cannot survive. They get anxious. Our hospital waiting rooms are going to be insane. The police will be busy and so will the courts. If you think you’ve seen homelessness, just wait.”