“The early results showed many participants were re-engaging in the community after years of deep poverty. Their futures are now uncertain.” 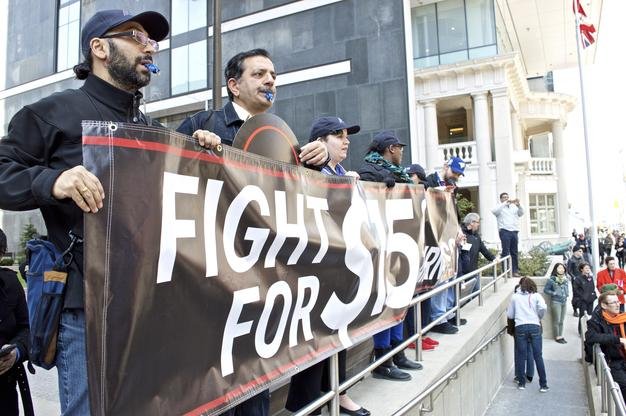 Concerns that a guaranteed income would be a disincentive to work for people on welfare have been refuted by numerous programs.

If ever there was a government policy that’s a no-brainer, it’s the Ontario Basic Income Pilot (OBIP) project.

So why did Doug Ford break an election promise and kill the program that’s now set to end in March 2019?

Some 4,000 Ontarians are taking part in the pilot. Laura Cattari, a member of the Hamilton Roundtable for Poverty Reduction, is one of them.

She says basic income recipients, “Did exactly what they were supposed to do. They trusted that the money would be there for making life-changing decisions. They found safer housing, started eating well, joined fitness programs, signed internet or cell phone contracts and left jobs to get ready to go to school. They’ve stepped out on a limb now the government has left them stranded.”

Basic income is not a new concept. Worldwide, basic income projects are happening in Alaska, Brazil, Finland, Kenya and India, with all reporting the additional money consistently being spent on better food, staying in school, improving housing and, in some cases, starting a small business with the goal of becoming financially independent.

In 1974, Manitoba launched a pilot in Winnipeg, Dauphin and a number of other small rural communities. Back then Mincome, as it’s also known, provided 1,300 families with annual incomes ranging from $3,800 to $5,800 for five years. The provincial government under Ed Schreyer along with the federal government under Pierre Elliot Trudeau funded the program.

By all accounts, the pilot was a huge success. But when Conservatives came to power provincially in 1977 and federally in 1979, the program was ended abruptly.

The researchers didn’t write a final report, but 30 years later Evelyn Forget, an economist in the Department of Community Health Sciences at the University of Manitoba, found 1,800 dusty old boxes of data on the program in the Winnipeg provincial archives. Using the data and census information, Forget determined basic income had an overall positive impact on recipients.

Concerns that a guaranteed income would be a disincentive to work were refuted. And workforce participation continued as usual with two exceptions: new mothers stayed home longer to care for their children, and teenagers who would have had to quit school to help support their families stayed in school.

Other win-wins emerged from the Manitoba experiment. Those in the program were more likely to wait for a job that was a good fit rather than taking the first position available, which could mean accepting underemployment or dangerous work.

Forget also found that hospital visits declined 8.5 per cent because there were fewer work-related injuries, mental health issues and incidents of domestic abuse.

Andrew Pinto, a public health and preventive medicine specialist and family physician at St. Michael’s Hospital in Toronto, is part of a team of doctors that is providing clinical support for the OBIP program.

Pinto says the pilot has helped improve the public’s understanding of basic income and showed how it’s a logical extension of the current welfare system that ultimately leads to significant cost savings in health care as well as education and the justice system.

In announcing discontinuation of the pilot last month, Social Services Minister Lisa MacLeod questioned whether the project would result in valid research. She claimed that more than 25 per cent of participants have either dropped out of the pilot or were failing to meet obligations such as filing their taxes.

But Tom Cooper, director of the Hamilton Roundtable for Poverty Reduction, challenges that assertion.

He says the minister’s claim “is yet another in a long line of excuses the government is using to justify their broken election promise.”

He says that, of the more than 1,000 Hamilton residents enrolled in the program “the early results showed many participants were… re-engaging in community after years of deep poverty. Their futures are now uncertain.”