You won’t hear it from this government, but Ontario is richer than ever – so where's all the money? 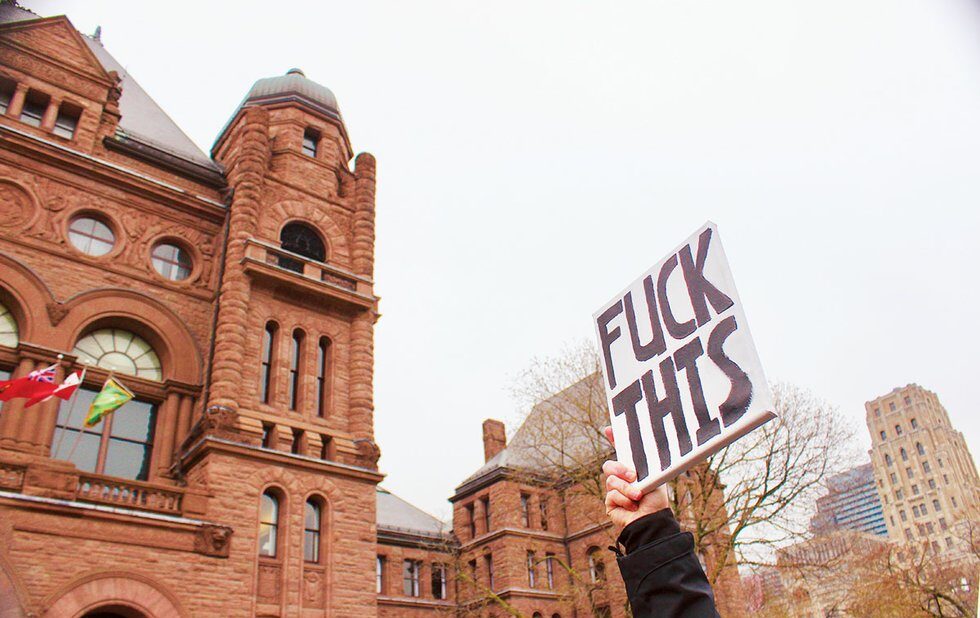 New details keep coming out about the Doug Ford government’s cuts to legal aid, to public health, to our schools and to programs to fight racism or help victims of violence.

And the pain is getting worse.

Kerry Monaghan, a self-described “autism mum,” met earlier this year with Ontario social services minister Lisa MacLeod and MacLeod’s chief of staff, Tim Porter. She described the meeting on social media last week, recounting to the minister how she and parents like her “spend our days, cleaning up broken toys, wiping feces from the walls, wiping away blood from our necks and faces.” And how the minister “sat quietly, hands clasped in [her] lap, nodding appropriately, as I recounted through tears how 97 per cent of my son’s therapy and our family support would be stripped away under [the Ford government’s] plan.

“I cried like a desperate mother, pleading for mercy.”

Those of us who don’t live with autism don’t know what it’s like. But we know it is life-altering and off-the-charts stressful. So what did MacLeod say to this urgent plea for help?

Monaghan reports that when it was time for the minister to respond, “she asked us where the money would come from. From refugees? From sex-trafficking? From battered women?”

In other words: Somebody’s got to suffer. The question is, why? What drives this kind of cruelty and indifference?

PC MPP Peter Bethlenfalvy, Ford’s president of the Treasury Board, is the man responsible for overseeing the cuts. Balancing the provincial budget is “a moral imperative,” he says.

In numerous speeches, Bethlenfalvy has insisted that he’s making the cuts on behalf of our children and grandchildren. They won’t have any public services, he says, if we don’t slay the deficit now.

“People in this province understand that Ontario must either right its fiscal ship or risk becoming a fiscal failed state,” he wrote recently.

Wait, what? Ontario, a “failed state?” Nobody buys that.

And nobody buys Bethlenfalvy’s claim that “the interest on debt accumulated by the previous Liberal government is the single largest cut to frontline services in Ontario history.”

This is nonsense. Paying interest doesn’t force us to cut services. It allows us to build schools, hospitals and transit now instead of having to wait for decades. And right now, the province is paying interest at historically low rates.

Bethlenfalvy knows this – he came to politics after a long career in finance. He was a high-level executive at TD Bank, with insurance giant Manulife and at DBRS, the global bond-rating service.

He says “understanding government debt… is an issue that’s close to my heart.”

His heart must have skipped a beat in December when Moody’s, another bond rater, downgraded Ontario’s credit rating. Moody’s said the Ford government tax cuts put significantly more pressure on the budget.

The 2019 budget aims to cut the deficit by $1.4 billion. But tax cuts since the last election will suck $3.9 billion out of provincial coffers this year alone.

In other words, the majority of the service cuts Bethlenfalvy is overseeing are paying for tax cuts.

As even the Ontario Chamber of Commerce now agrees, Ontario does not have a spending problem – we have the lowest program spending per capita of any province in Canada. What we do have is a revenue problem.

Ontario receives about $2,000 a year less per person in revenues than the average in the other Canadian provinces. If we brought in revenues the way they do, we’d have $28 billion a year more to spend on public services.

You won’t hear it from this government, but Ontario is richer today than ever before. Our real economic activity per person is at record levels. So why can’t we make ends meet? Why are many jobs so underpaid, part-time and insecure? Why is government (seemingly) always broke? Where’s all the money?

Bethlenfalvy knows where it is. He’s been around it his whole career.

Canadian corporate profits hit a record high in the third quarter of 2018. Corporations and all high-income earners need to pay more taxes. This province laid the foundation for their success. It’s time they repaid the favour.