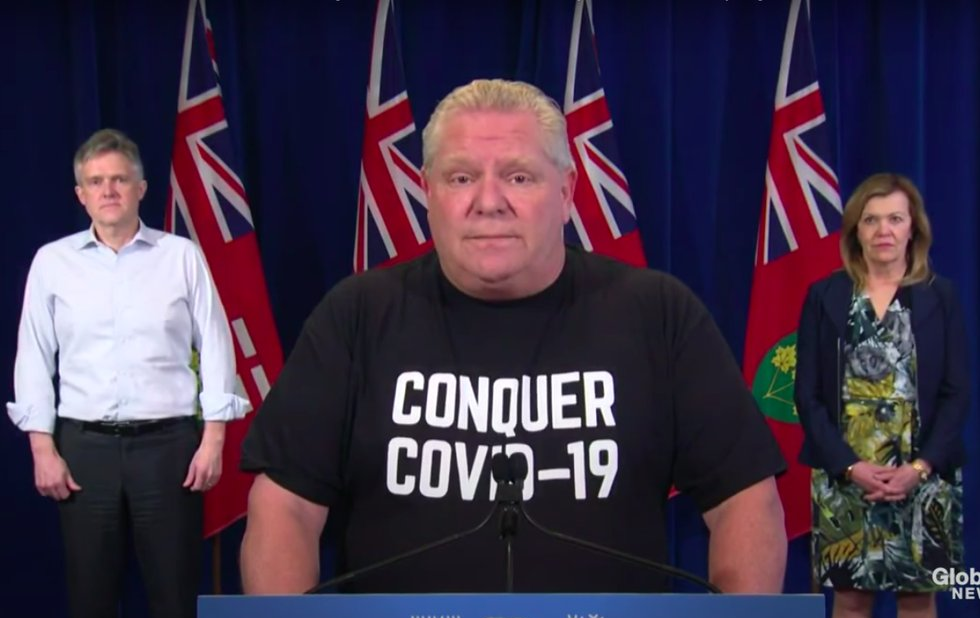 At this time last year, Doug Ford was out West, as far away as possible from the maelstrom of his own making at Queen’s Park.

Barely a year into his mandate of cuts and chaos, political observers were writing his obituary after his chief of staff (and designated henchman) Dean French got caught with his hand in the patronage jar.

Seems like another lifetime now as Doug continues to ride the COVID-19 wave to higher approval ratings. Ford looked like he was going to take another tumble a few weeks back when old folks were dropping like flies in long-term care facilities and the army was called in to help manage the crisis.

There was a lot of outrage back then from Ford, including the pledge to “spare no expense” to address the issues in long-term care. That was amid reports inspections had decreased substantially in the province’s 626 facilities.

But summer’s here, and the time is right for dancing in the streets. The public is not paying as much attention to the happenings at Queen’s Park as the lockdown lifts and we try to get back some semblance of our pre-pandemic lives.

But long-term care homes are back in the news. This time over complaints from the families of residents at one of the homes taken over by the province during the pandemic that the owners are not providing air-conditioning in the stifling heat. Once again, the premier had some strong words at his press briefing yesterday. But he’s stopped short of committing to making AC mandatory in long-term care facilities.

The timing is noteworthy.  This week, three of Ontario’s largest private nursing home companies are set to pay out some $59 million to shareholders despite hundreds of COVID-19 deaths at their facilities.

Also this week: the final Canadian Armed Forces (CAF) team, called back in May to help deal with the emergency in long-term care homes, concluded its work.

At the time they were deployed, some 150 of the province’s 626 long-term care homes were dealing with COVID-19 outbreaks. A total of 1,855 cases had been diagnosed. Twenty of the homes were identified as experiencing critical staff shortages. The horrors outlined in the CAF’s report included allegations of abuse and major concerns with standards of care. It was so bad at some homes that police were called in to investigate negligence. Who could forget?

Apparently, the Ford government has. It moved late last month on new legislation that will make it easier to privatize long-term care homes and harder for families to take legal action in cases where there’s abuse or negligence of care.

It was also revealed by the Toronto Sun in late June that senior ministers in Ford’s cabinet, including Minister for Long-Term Care Merrilee Fullerton and Treasury Board chair Peter Bethlenfalvy, rejected the idea of emergency funding for long-term care shortly before the first COVID-19 case was reported in the system.

The province announced an independent commission back in May to review the pandemic response. But calls for a public inquiry from opposition parties and unions representing health care workers have been rejected by the government.

The awful truth is that we don’t have to look that far back to understand the crisis in long-term care. The provincial auditor’s report back in December 2019 noted the failure at 56 homes to follow basic nutrition protocols. They were serving food past its best-before date, leading to 1,121 food-related emergency room visits in 2018.

In fact, the system was already at capacity before the pandemic broke. And while COVID-19 has served to exposed massive shortfalls, it’s no secret we’ve been headed for a tsunami in long-term care for the last two decades.

A report prepared for the Conference Board of Canada warned as far back as 2011 that the sector is facing significant challenges, including increasing demands for beds, a high proportion of older residents with higher care needs and a “rising tide” in dementia.

Long-term care homes are supposed to work under the precautionary principle. But that hasn’t been happening during the pandemic.

Many have not been able to get personal protective equipment (PPE) during the pandemic. They have had to make do with surgical masks, which are 70 per cent less effective in stopping the virus than the N95 masks recommended for health-care workers.

The Ontario Nurses’ Association took the government to court over alleged breaches by for-profit homes of their “duty to care” to employees. The ONA says that lack of access to PPE left health-care workers with the decision to choose between their own lives or that of residents.

The judge hearing that case likened the situation in some long-term care homes to the Blitzkrieg in London during the Second World War.

The Ontario Health Coalition says the province needs a plan now to deal with the crisis in long-term care homes. It’s time, too, the group says, to consider revoking the licences of problem homes and bringing private care homes into the public sector. Otherwise, we’re just going to repeat the same mistakes the next time a pandemic strikes.

Hubris has been a tragic flaw of Ford’s. Hopefully, he hasn’t let the good press of the past few months go to his head.

Ontario has managed to head off a full-blown disaster during the COVID-19 crisis, but it’s been a different story in long-term care homes, where 80 per cent of the province’s COVID-related deaths have taken place.

The COVID numbers globally continue to climb. And scientists are now telling us that this pandemic will be with us for the foreseeable future. So while we’re learning to cope, the threat continues to loom.

A second wave is inevitable, we’ve been told; how bad it will be remains to be seen. But there’s no running. The problems in long-term care are only going to become more difficult to confront if the government continues to ignore them.