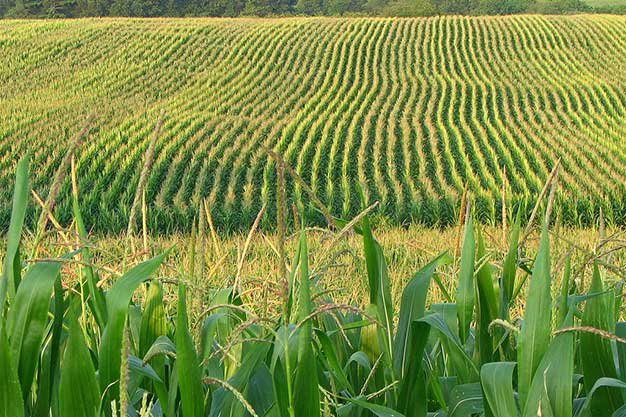 Another unusually wet fall is being blamed for the vomitoxin that devastated millions of hectares and a quarter of Ontario’s corn harvest this season. The mould infestation, however, isn’t likely to contaminate your cornflakes.

That’s because 84 per cent of corn grown in Ontario never ends up on your plate most of it feeds cows and pigs. Ditto for the other big Ontario crop, soy, which together with corn blankets over 70 per cent of acreage devoted to farming in the entire province.

Food production is the second-largest industry in Ontario but only 24 per cent of the food made here is sold here. That makes it sound like we’re growing a lot more food than we eat, but not so – the province is increasingly importing more food than it exports. Ontario’s $9 billion food deficit has more than doubled over roughly the last decade.

That deficit isn’t just made up of bananas, oranges and crops that don’t grow in our climate. Ontario imports major quantities of potatoes, strawberries, apples, cabbage, beef, chicken and lamb. In fact, more than 50 per cent of the $20 billion in food we import annually could have been produced in Ontario.

Successive provincial governments have said that ensuring Ontarians have access to the foods that are grown and produced locally is a priority, but trade agreements “are all ramped up for the extermination of small-scale farming,” says Emery Huszka, a farmer in Florence, Ontario, and president of the Ontario chapter of the National Farmers Union.

Now Ontario’s new government stands poised to open the door to development in the Greenbelt, one of the last vestiges of prime farmland in Ontario, via its proposed Bill 66.

There are big hurdles to jump in putting local food on our plates. The first is getting over our colonial history as a supplier of grain and meat bound for Britain.

Rather than build up self-reliance in food production, we have developed an agricultural model based on export and we’re stuck with it.

Less than an estimated 10 per cent of all food consumed by Toronto residents is produced in the region. The food that does get to us passes through many hands in a massive food chain made up of processors, distributors and retailers that’s primarily designed around sourcing goods from offshore at low cost. The system struggles to answer the demand for local food.

Take, for instance, strawberries picked from a California field on a Friday afternoon. The berries are chilled at the field, gassed and wrapped to delay the ripening process. They travel 39 hours non-stop in a refrigerated truck to a grocery chain’s central warehouse in Ontario and reach store shelves by Sunday afternoon.

Local strawberries are also forced to pass through the central warehouse, but by the time those strawberries reach the store shelf, the ripening process is often well under way.

Canada has one of the most corporate food systems in the Western world. Three grocery retailers (Loblaw, Sobeys and Metro) control almost 80 per cent of the national market. As the most economically powerful actors in the food chain, “they dictate the terms of trade to everyone else,” says Rod MacRae, an associate professor in the Faculty of Environmental Studies at York University.

The system prioritizes the needs of its players to make a profit, which sometimes results in nonsensical redundant trade. Take the carrots produced in the Toronto region – 25 five per cent of them are exported at the same time as 20 per cent are imported.

Over the years, food producers and processors to feed the mammoth food system have grown bigger and fewer in number. Trade agreements, which opened the borders to cheaper food, pushed consolidation. The Niagara region was once home to 22 fruit and vegetable canneries. When the last one closed in 2008, peach growers with nowhere to sell their peaches bulldozed hectares of orchards. These days Ontarians eat mostly imported peaches.

At the same time, governments continue to pay lip service to developing local food systems, with the feds aiming to grow food exports to $75 billion by 2025, which would make Canada the second-biggest agri-food exporter in the world.

MacRae calls a food system designed around exports “a complete economic fallacy.” He says we should first be producing food to satisfy our domestic needs and then trading the surpluses, because when you export, somewhere else gets all the economic multipliers, including the jobs.

Meanwhile, prime land for farming is being swallowed up by development every day. Ontario, in fact, loses 71 hectares of farmland daily to urban purposes.

To help stem the losses, the province created the 7,200-square-kilometre Greenbelt in 2005. At the time its farmers produced 66 per cent of the celery, 50 per cent of the cauliflower and 33 per cent of the mushrooms grown in Ontario. Bill 66 will only contribute to the continuing decline of small-scale agriculture.

Today only two per cent of Canadians farm. Huszka predicts that 20 years from now, absent a serious government food policy to entrench the local food system, only 0.2 per cent of people will be farming. “And when that day comes,” he says, “you’ll get whatever they serve.”