Fight For $15 And Fairness rally sends message to Doug Ford: We are the people

The mood was upbeat at Saturday's minimum wage rally scored by activists as a "vital first blow in the struggle against the Ford government,” but there’s no sugarcoating what a PC majority means for the cause of social justice in Ontario 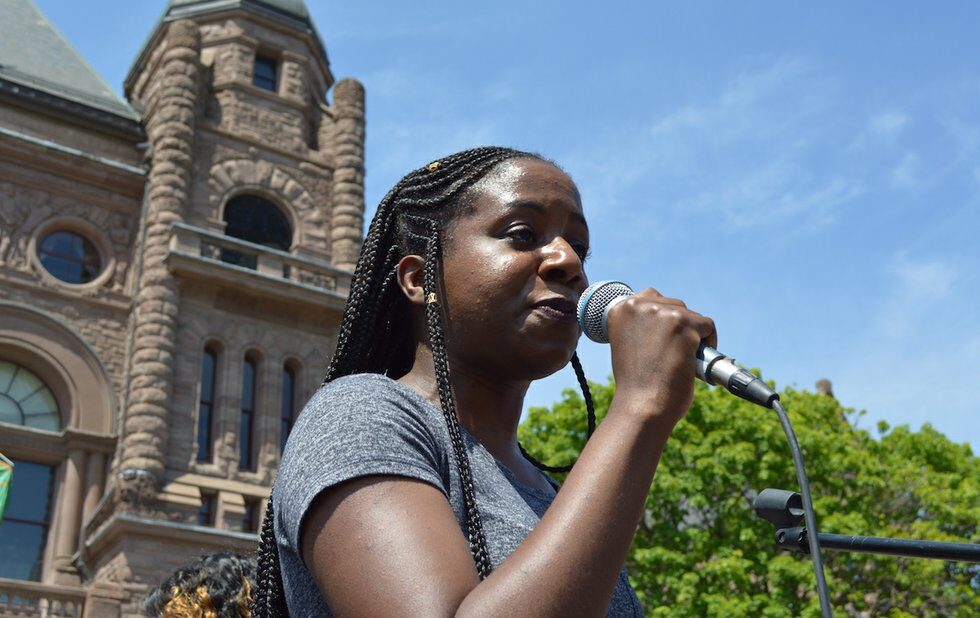 Naomi Klein says the election of Doug Ford was a blow to social democratic movements, and that people will get hurt no matter how fierce the resistance. 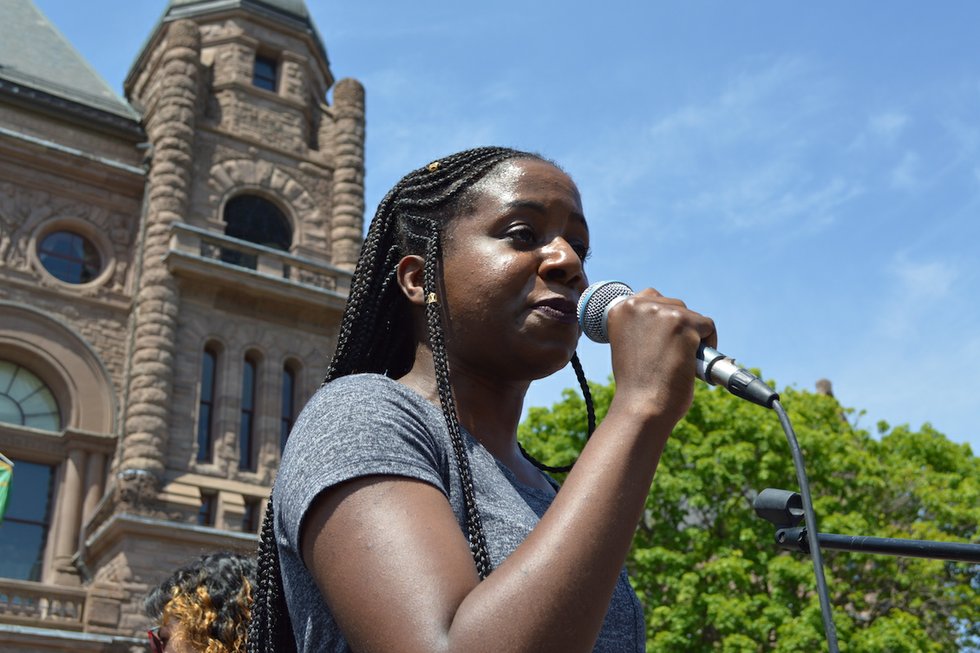 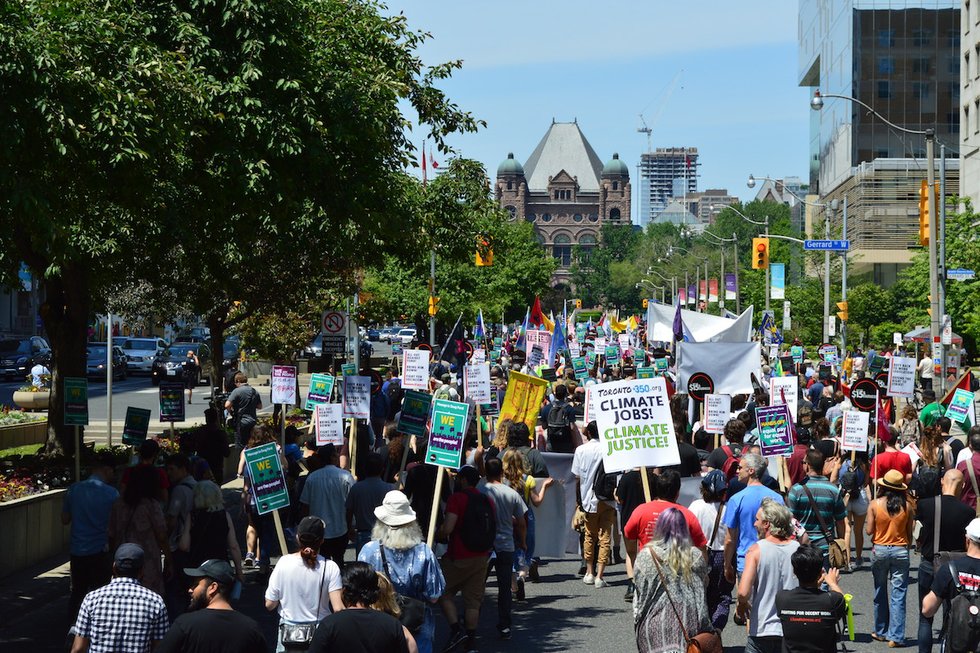 One anti-poverty group scored last Saturday’s Fight For $15 And Fairness rally as “a vital first blow in the struggle against the Ford government.”

And an impressive showing it was in front of the Ministry of Labour building on University, led by the sounds of Brazilian percussion group Baque de Bamba. They came to march to Queen’s Park – and to tell premier-designate Doug Ford and his government-in-waiting to lay off the Liberals’ Fair Workplaces, Better Jobs Act (Bill 148), which is set raise the minimum wage to $15 in January 2019.

By the time the crowd is ready to head to Queen’s Park, about 2,000 people have gathered under a merciless midday sun. The gathering is sweltering but energized by the turnout, with signs and banners representing union groups and frontline support organizations from as far away as Niagara and Ottawa. From the back of a flatbed a beat boxer and a rap artist lead the demonstrators up University in a syncopated chant: “Minimum wage / under attack / What do we do? / Act up, fight back.”

Near the Queen Victoria statue in front of the Legislature, newly elected NDP MPPs are invited on to a small stage by Black Lives Matter–Toronto co-founder Sandy Hudson, one of the keynote speakers at the event. Other guest speakers include Naomi Klein, a driving force behind the movement to build a coalition of labour, environment and social justice organizations, and Ontario Federation of Labour president Chris Buckley. The mood is upbeat but there’s no sugarcoating what a majority Ford government means for the cause of social justice in Ontario. 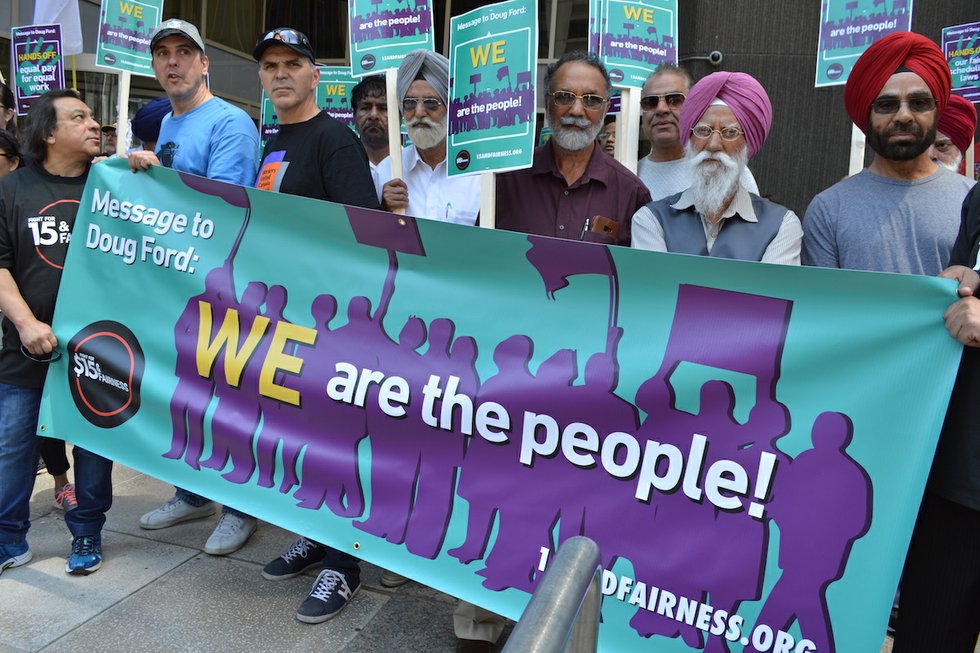 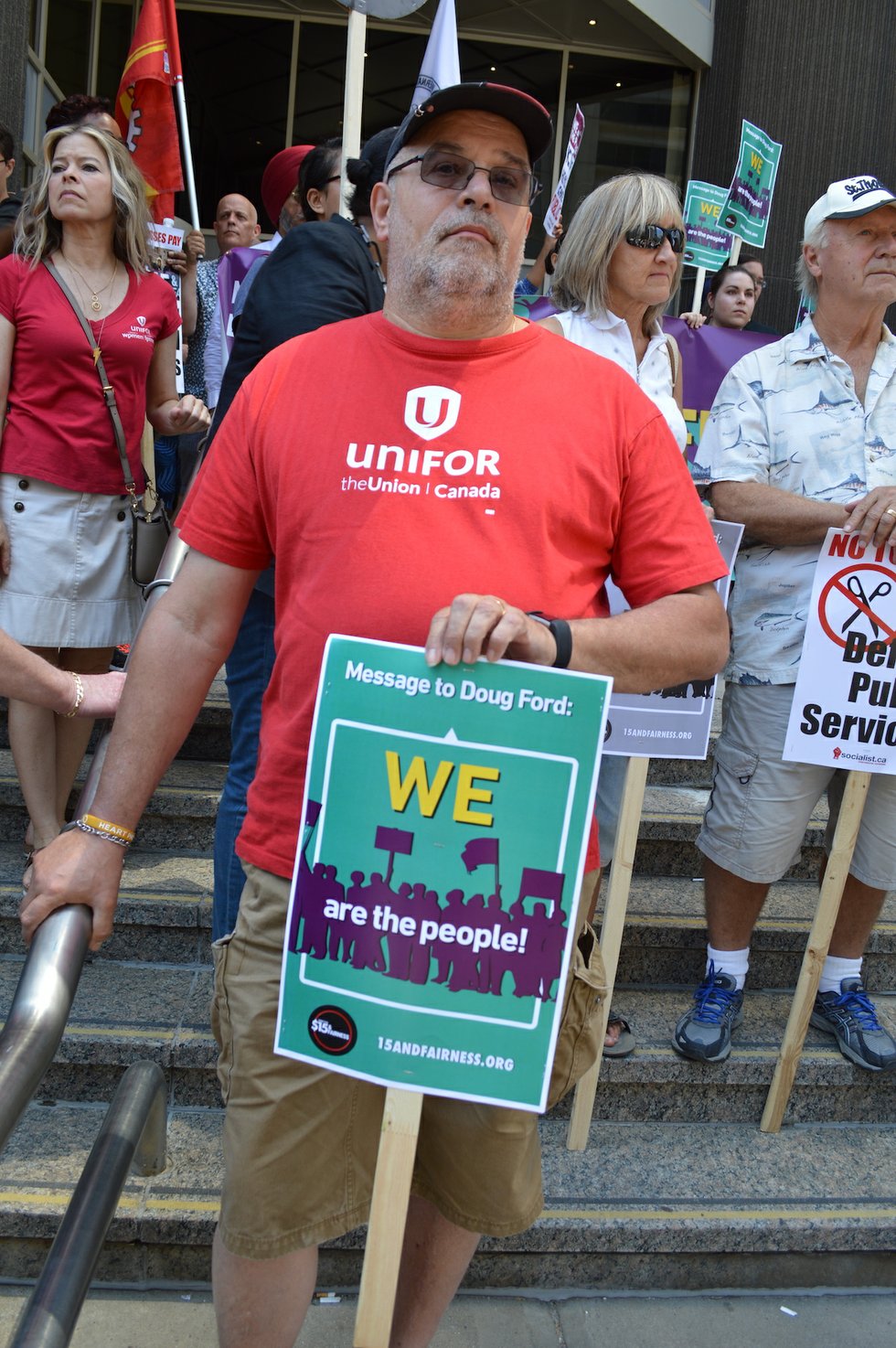 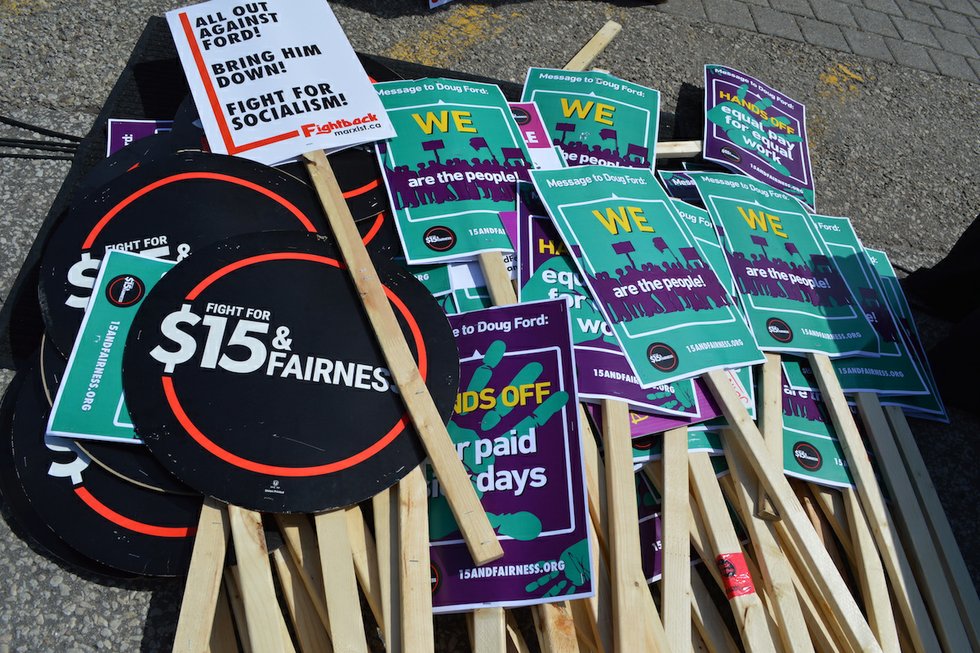 “We did get a bunch of activists elected,” Hudson tells the crowd, “but we can’t just rely on those elected. We have to rely on each other.” Noting the union presence in the crowd, Hudson called on leadership in the province’s labour movement to “take all the resources that we have… and start training for a fight. If it takes storming that building over the next four years, we have to be willing to do that.”

Ford has proposed replacing the minimum wage with a $850 tax credit for low-income earners, which those who’ve crunched the numbers agree will mean less money in the pockets of working people. On that issue, Ford’s media manager Jeff Silverstein, replying in an e-mail to NOW, offers up familiar talking points used by Ford on the campaign trail.

“A Doug Ford Ontario PC government understands that the people of Ontario are in need and will implement policies to make life more affordable, putting more money back into taxpayers’ pockets,” Silverstein writes. “As part of that plan, we’re going to make Ontario’s tax system fairer for low-income households by introducing a minimum-wage tax credit. This will save them up to $850 while protecting their job security.”

Silverstein adds that, “full-time minimum wage workers will also save on their hydro bills, gasoline at the pump and natural gas to heat their home or apartment.”

Pam Frache, coordinator of Fight For $15 And Fairness – the group that first launched the campaign to raise the minimum wage in 2013 when it was frozen at $10.25 – says the current fight is about more than minimum wage. It’s about the need for fair scheduling and equal pay for equal work, regardless of whether you work full-time, part-time or for a temporary agency.

But Ford is only one character on the austerity stage. Rally emcee Deena Ladd, co-founder of the Workers Action Centre, one of the organizers of the event, says “it’s corporations that hide behind those lobby groups that have been actively fighting us every step of the way.” Among them, the Ontario Chamber of Commerce, which claims the move will lead to a 50 per cent increase in inflation, and the Canadian Federation of Independent Business, which has described a $15 minimum wage as a “job killer.” “They are the ones that will be leading this charge,” says Ladd.

Sarah Jama, a community organizer from Hamilton and co-founder of the Disability Justice Network of Ontario, warns what activists will be up against by reminding the crowd of Mark Wafer, the Tim Horton’s franchisee who made headlines when he argued against Bill 148 in front of the Standing Committee on Finance and Economic Affairs. He said that it would make economic sense to lay off disabled workers first should $15 minimum wage go through. Wafer had told the committee that, “In my business, jobs that don’t necessarily have to be done on a regular basis… those jobs would be the easiest ones to cut first.”

The Greater Niagara Chamber of Commerce also argued against a $15 minimum wage, suggesting that the Ontario government already had “a great many tools and programs to relieve poverty, and could simply utilize and perhaps expand upon those.”

Klein, the last speaker up, acknowledges that the election was a blow, and that people will get hurt in Ford’s Ontario no matter how fierce the resistance.

She paraphrases American historian Howard Zinn, saying that “the really critical thing isn’t who’s sitting in office, but who is sitting in – in the streets, in the cafeterias, in the halls of government, in the factories. Who is protesting, who is occupying offices and demonstrating – those are the things that determine history.”

Klein says that solidarity in the austerity battles to come will arise from building more durable relationships between struggles, before floating the idea of “conscientious objection” to Ford’s proposed tax cuts. She suggests “giving people easy-to-use tools to refuse their tax cuts and direct that money to grassroots mutual support networks instead. We need to start peer-to-peer, people-to-people wealth redistribution if our government won’t do it.”

She adds, “We need to never stop reminding Doug Ford that he has no mandate for economic austerity, no mandate to cut our public services because he never published a platform.” 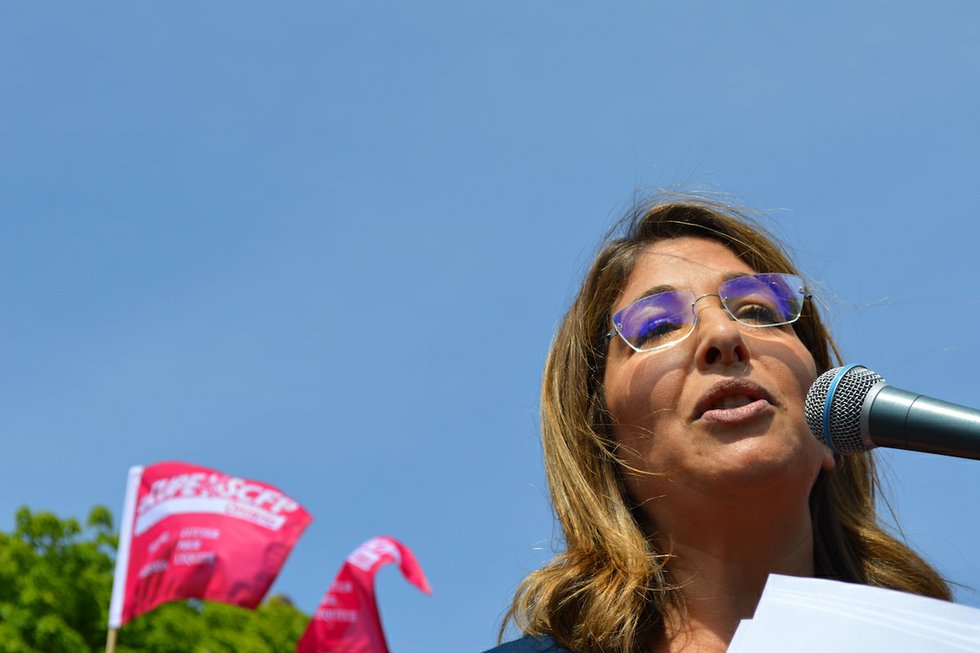