Halton, Hamilton and York will join Peel and Toronto in the red zone as Ontario lowers thresholds in the COVID-19 warning system 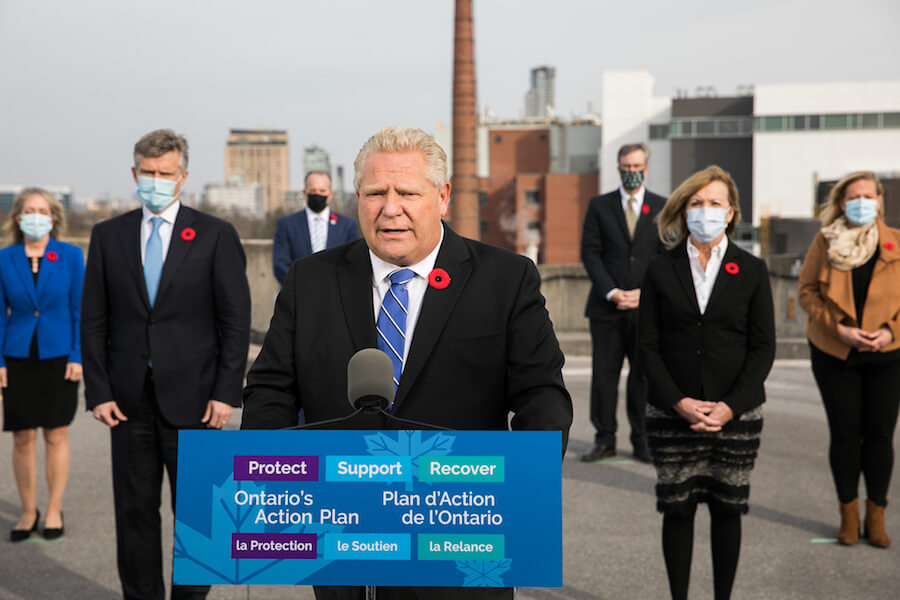 Ontario is lowering the thresholds in the COVID-19 early warning framework and moving Halton, Hamilton and York into the red zone alongside Peel and Toronto.

“The updated modelling yesterday made it clear that the situation has changed dramatically since we started implementing our framework six days ago,” Ford said at a Queen’s Park press briefing on Friday.

Calling the COVID-19 projections “alarming,” Ford said people in the red zone should only leave the house for essential reasons such as work, school, medical appointments, groceries and exercise.

“We’re staring down the barrel of another lockdown and I will not hesitate for a second if we have to go further. Our number one priority right now is getting these numbers down,” he said.

“Families should not, I repeat not, visit any other households or allow visitors to their homes. And please avoid social gatherings.”

Ford also said he’s asked Ontario’s Chief Medical Officer of Health Dr. David Williams to take a “hard look” at the current restrictions and report back next week to let him know if further action is necessary.

All the jurisdictions will move into the new levels at 12:01 am on Monday, November 16 with the exception of Toronto, which moves into red at 12:01 am on November 14 as previously announced.

“People are having too much contact with each other,” Williams said during the press conference, adding that events such as large Halloween parties and weddings with no masking or physical distancing have contributed to the rise in COVID-19 cases.

Throughout the past week, public health experts have criticized both Ford and Williams as slow to respond to rising cases.

Ford has called the report “totally inaccurate.” Today, he defended the decision to lower the thresholds now, saying the modelling data he saw nine days ago is different from yesterday’s data. “I’ve been decisive from day one,” he said.