Can Doug Ford be beaten? 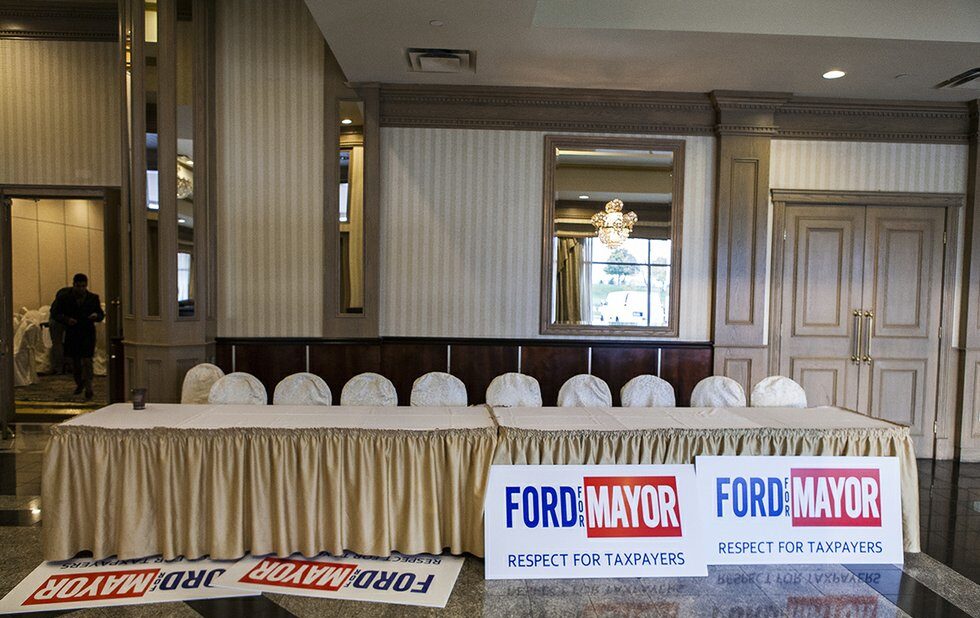 If we’ve learned anything from Doug Ford’s time as Ward 2 councillor and his own run for mayor, it’s that folks who supported Ford knew exactly what they were getting when they voted for him. And couldn’t care less if he’s a racist, homophobe or misogynist – it’s all Greek to them.

That was proven again last month when PC party members did what was widely thought to be the unthinkable and voted Ford leader. Ever since, his election to the Ontario premier’s office, the second highest seat in the land, has been presented by the mainstream media as inevitable. That’s another story.

But just what is it going to take to beat Doug? A dozen people representing various non-partisan groups, NGOs and labour unions met in a downtown Toronto office last week to exchange notes on that question. Here are a few compelling takeaways from the discussion.

The Trump phenomenon stateside has been described as a “guy-lash.” It can’t happen here, right? Maybe. Arguably, a similar state of affairs is infecting our politics, with Jordan Peterson being one embodiment of that reality.

And Ford is just the kind of guy, with his talk of “elites,” etc., that appeals to voters who are not only angry but less engaged in politics. To them, issues don’t matter as much as sticking it to the established order.

In the PC leadership contest, Ford benefited from the fact he was the only man in the race. He stands to benefit from that again in the upcoming provincial election (assuming Green Party leader Mike Schreiner doesn’t suddenly become a factor).

Justin Trudeau proved it in 2015, bringing the Libs all the way from third to a convincing majority, selling hope over Harper’s fear and deficits over balanced budgets.

Premier Kathleen Wynne is trying to replicate that feat by pushing a progressive agenda. The needle has moved a few percentage points in the Libs’s direction since they tabled a budget promising more spending, including free daycare for pre-school children.

For Wynne, the problem is twofold: Ford not only has a popular and well-known personal brand, he also has the benefit of the PC party brand going for him.

He may be loathed in Toronto for his role as the so-called “brains of the operation” behind the train wreck that marked his brother’s tenure as mayor, but beyond T.O., very few know anything about Ford outside of political slogans that can fit on a bumper sticker, like “stop the gravy train.”

Much like former PC premier Mike Harris, whose Common Sense Revolution left Ontario a tattered legacy, the perception outside Toronto is that, love him or hate him, Ford is someone who will do what he says he’s going to do.

Where does the stumble happen?

A silver lining for the Liberals in all the polls showing Wynne on the way out is that Ontarians feel much better about the direction the province is headed than they do about Wynne.

The question is how much room is there to grow their vote.

NDP leader Andrea Horwath is the most liked among provincial leaders, but remains a relative unknown. But unlike 2014, there is not as much of a pool for Libs among NDP voters this time around. Voting intentions of NDPers have remained relatively constant. For Liberals the target will be getting out the vote among women and young people.

There is also a fault line that’s slowly opening on the PCs. It’s on the issue of race.

Ford’s wacko right wing connections and past pronouncements on race make him vulnerable in the same socially conservative and heavily ethnic enclaves in the 905 where he’s trying to make hay on the sex-ed curriculum debate.

It’s already begun. Ford was forced to distance himself this week from past anti-Muslim tweets and social media posts made by leadership ally Tanya Granic Allen comparing women who wear burkas to bank robbers, among other disparaging remarks.

It’s been a truism of Ontario politics – albeit a lesser known one – that in some ridings voters who support the PCs are just as likely to vote NDP, which has led some political observers to draw comparisons to Alberta when assessing the NDP’s chances.

During Alberta’s last provincial election, the appetite for change was just as pronounced as it is now in Ontario, and Wild Rose supporters voted in droves for the NDP, toppling the PC majority that ruled the province for more than 40 years. Mind you, a collapsing oil industry had something to do with that, but nevertheless….

The bad news for the NDP in Ontario is that they seem to be bleeding votes to the PCs, instead of the other way around. A poll released this week by Angus Reid shows the PCs ahead of the Dippers among voters who identify as working class.

Ford’s lofty poll numbers are largely attributable to the fact he is seen as the change candidate, but is it real change he’s offering or change for the sake of change?

Lately, Ford has been spending more time hiding from the Queen’s Park press gallery than answering burning questions, like when – or whether – he’s going to deliver a fully costed platform.

His relationship with the media is growing more tense. The honeymoon may already be over after Ford declared last week that he will not have a media bus following his campaign around the province, as is the custom for provincial leaders.

Do values count for anything in campaigns?

Affordability issues have consistently been at the top of the list of concerns for Ontario voters in most recent polls. Not surprisingly, Ford is sticking to pocketbook issues.

But values are one important metric that polls don’t measure.

Here there’s a lesson to be learned from the 2015 federal election, where the tide went against Harper after the government tried to turn the niqab– into an election issue.

Whether a similar moment of truth will arise for Ford remains to be seen, but the rumour mill being what it is at Queen’s Park, stories are already swirling.

Moreover, the PCs are still recovering from the sexual misconduct allegations that toppled former leader Patrick Brown. And Ford can ill-afford too many more weeks like the one he just had after what looked like an attempt by the party to cover up sexual harassment allegations made by a former intern against PC MPP Michael Harris. Harris has since been removed from caucus.

There’s a lot riding on election 2018 in Ontario, since as the province goes, so does the country.