NOW MagazineNewsFighting Doug Ford: Is it time for a general strike in Ontario?

Fighting Doug Ford: Is it time for a general strike in Ontario?

Some labour groups and community organizers insist that it is, but in union halls and workplaces across the province others say the strategy risks turning the labour movement into the bogeyman – which is just what Ford wants 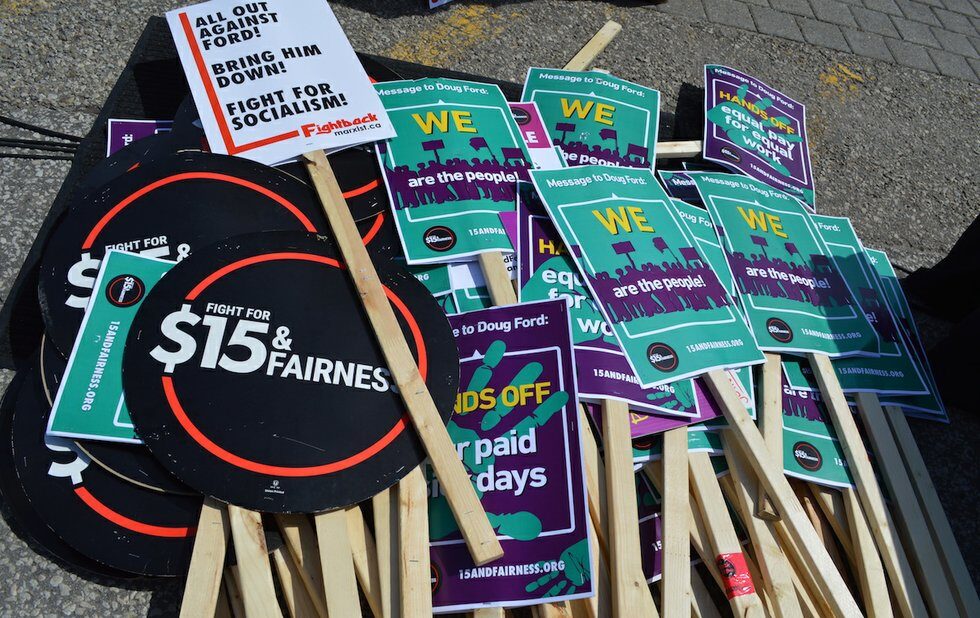 The terrain for political organizing in Ontario has been bumpy ever since Doug Ford came to power. Feelings of hopelessness and defeat have been common responses to his government’s onslaught of ruthless cuts, but seasoned organizers aren’t succumbing to the temptation to pack it in.

Older activists remember the Days of Action rotating strikes organized by Big Labour to fight the Mike Harris government and its Common Sense Revolution back in the mid-90s. The strikes were held in different cities and while they helped mobilize popular opinion against the government’s austerity agenda, they did not prevent Harris from being re-elected in 1999.

Labour unions and their community partners are remembering lessons from that fight as they strategize on how to respond to Ford’s program to dismantle Ontario’s publicly funded health care system and to cut as much as they can get away with.

Labour groups and and many other community organizers are insisting that now is the time for a general strike. But in union locals and workplaces, there are those who just want to get through the day and wait Ford out.

While organizers see a place for large actions, that’s just one option, says Canadian Union of Public Employees Ontario (CUPE) head Fred Hahn. Mitigating damage right now is part of the job of organizers, he states. At the same time, Hahn argues, labour unions have to build alliances to ensure the PCs don’t get re-elected.

This work is starting at the CUPE local level, with a tour last September of 17 locals in the north. CUPE is using its broad base to work against the Ford plan to divide rural and urban voters. It’s also important that labour not be seen as the bogeyman, which is what the Ford government so keenly want, says Hahn.

“They want that fight. This iteration of the right really needs an enemy. And they’ll be more than happy to make unions the enemy.” Looking for unusual suspects to work with will be key to countering Ford so that “when we say things, we’re never saying them by ourselves,” says Hahn.

The Ontario Federation of Labour is flexing its organizing muscle with regional meetings starting this month in at least six cities across the province, culminating with a Take Back Ontario gathering in Toronto on March 25. That event, the OFL says, will “bring together labour leaders, activists and community allies to build our base and our strategies of escalating actions.” Those plans include work with the Ontario Health Coalition to coincide with the release of the Ford government’s budget and a large-scale action on the anniversary of the Ford government’s election in June.

Edward Hon-Sing Wong, a York University PhD social work student and CUPE 3903 member, has researched and written about organizing in ethnic communities. He is concerned that the NDP and progressive groups have largely ignored these communities, which has left a gap in what has long been considered a likely base of support of the left.

“We need to build community, especially with newcomers who end up in spaces dominated by the right-wing,” he says. “We need to start talking to people.”

The movement around Ford’s plans to repeal the sex-ed curriculum stands out as a model for the way forward.

The effort is bringing together a diverse coalition of youth organizers, teachers and CUPE members, which in the long run could lead to a culture change even the Ford government can’t ignore.

Teachers, politicized since their days confronting Harris, were quick to support the modernized curriculum, including a recent Charter challenge.

“We have never seen district school boards make more oppositional comments against a government,” says Kidd. “Across the province people have stood up against changes to the curriculum.”

He stresses that labour and community organizers need to use this opportunity to bring other people into advocacy. This is what happened under the Harris government, says Kidd: “Talking to people about the impact of cuts is a positive thing.”

CUPE locals are well positioned to help, says Hahn. “We represent school board workers, support staff in school, education assistants and early childhood educators. There are connections with parents and school boards.”

CUPE is also actively supporting the Fight for $15 and Fairness minimum-wage campaign in a number of communities like Brampton, Mississauga and Peterborough.

Solidarity, says Hahn, means educating union members about why they should support, for example, Indigenous struggles in BC. “These are the days when we have to be much clearer about which side you are on. We have to be there for others because we are going to need them to be there for us.”

Pam Frache, coordinator of Fight for $15 and Fairness and an organizer with Workers’ Action Centre, shares the need to build a network “person by person.”

“Often a plan is developed by smart people in central offices, and then they’re shopped out to the people affected, whereas in our campaign every single priority demand was identified by workers themselves,” says Frache. “It depends on your strategic orientation about where change comes from. If you think it comes from getting the right people elected at any given movement, then you’re going to have one strategy. If you believe change comes from mobilizing workers in the workplace, where in theory they have the ability to withdraw their labour and shut down the production of profits, then you’re gonna have a different strategy. Our movement has been inspired and informed by the struggles of workers in precarious employment all around the world.”

A broad-based effort in support of a $15 minimum wage meant the Ford government could not kill everything the Kathleen Wynne government had put in place. Ford, for example, did not rollback the $14 minimum wage. “That’s more than $5 billion from corporate pockets going into workers’ pockets,” says Frache.

And wage indexation won under the Liberals will begin in 2020. The Ford government also kept intact Wynne’s extension of emergency leaves to all workplaces, better protections for temporary workers, three weeks paid sick leave after five years, domestic violence leave and joint responsibility for health and safety between temp agencies and companies.

The Council of Canadians Ontario organizer Mark Calzavara says their organization is working with labour, anti-poverty advocates ACORN, the Toronto Environmental Alliance (TEA), unions and others on a Toronto-focused strategy. They came together over Ford’s cut to city council and are now taking action on wider provincial issues, such as the omnibus Bill 66.

Introduced just before the Legislature broke for the holidays, it was an unlikely coalition made up of the Ontario Federation of Agriculture, environmental groups and various municipalities that forced the Ford government to back down on changes under the bill that would have weakened drinking water standards.

Dusha Sritharan, climate change campaigner at TEA, says environmental movements have been able to establish links with social justice groups at the municipal level, especially around the city budget, but more needs to be done provincially. Sritharan says it’s harder to divide people when they actively speak up for other affected communities. “If you have people standing together, it’s a much louder message.”

Still, Bill 66 will impact more than traditional environmental issues like the Greenbelt and drinking water. It also proposes weakening the Employment Standards Act, long-term care and more. Calzavara says that members across the Council’s 14 provincial volunteer chapters  have made personal phone calls to PC supporters in Ontario, urging them to stop donating to the party.

Calzavara says their calls indicate that 50 per cent plan to no longer donate. “But there are still a lot of silos,” says Calzavara about provincial organizing. “It would be very interesting to see how we might bring more groups together.”