The last guy party insiders wanted just stole the PC leadership – and like the perfect storm that blew his infamous brother into office, Doug Ford seems to be riding another wave of voter anger to the premier’s office 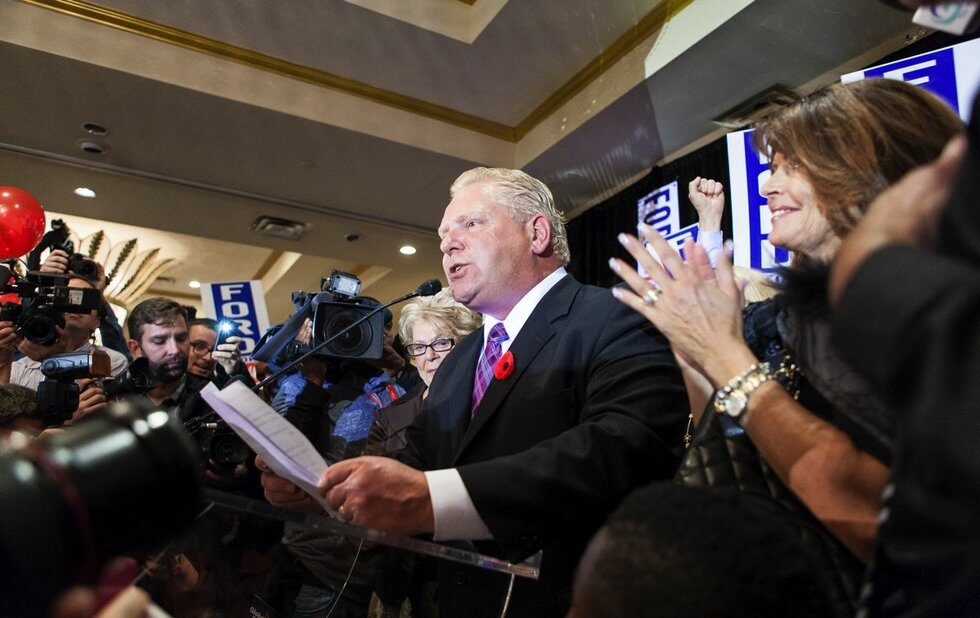 Well then, we might as well just call the election now that all the major news outlets are reporting that newly minted PC leader Doug Ford is almost certainly headed for a “massive” majority and a date with the interior decorator to measure drapes for the Premier’s office, according to all the latest polls.

So personally unpopular is Liberal premier Kathleen Wynne that the PCs can run Genghis Khan against her and they’d still win, or so the theory goes.

Mainstreet was out this week with another poll showing the PCs with a 21 point lead. The latest from Forum Research suggests the PCs could win 84 seats out of 124, including Wynne’s in Don Valley West. That poll also suggests half of Ontarians think Ford is a bad choice for PC leader, but that wrinkle seems to have gotten lost in the reporting. As did the fact that almost half the 923 people surveyed by Forum, some 408 people, intended to vote PC anyway.

Some of those in mainstream media spoiling for a fight – when aren’t they? – have been quick to embrace the possibility of Ford as Premier, lending Ford a newfound air of respectability. Even the Globe is hinting at a future endorsement, musing in its opinion pages after his leadership win about voters witnessing a more mature Ford.

It seems most among the gatekeepers of public opinion in the fifth estate have forgotten Doug’s role as carnival huckster and enabler-in-chief during little brother Rob’s tenure as mayor of Toronto. And how he helped set transit planning and waterfront development back a decade – not to mention used his office to advance the interests of the family labelling business.

The second coming of Ford

The party that didn’t want his old man Doug Sr. when he was a backbencher during Mike Harris’s Common Nonsense Revolution – and didn’t want Doug either, blocking his past efforts to run provincially for the party on at least two previous occasions – now finds itself with Ford as leader.

That would make it two coups in the PC party in the space of little more than a couple of months, beginning with the overthrow of Patrick Brown over sexual misconduct allegations in late January.

Ford arguably stole the PC leadership. He got fewer votes than his closest rival, Christine Elliott, and won fewer ridings. But because of a convoluted point system giving ridings different weight, Ford came out on top.

Elliott initially challenged the results, which led to the announcement of the vote being delayed. Bedlam ensued after party officials emerged from behind closed doors to tell those gathered at a Markham hotel to hear the result last Saturday (March 10) that the vote would be announced “as soon as practically possible.”

Ford’s forces were quick to claim the fix was in to give Elliott the win. One of them started shouting at the assembled cameras. Frank Klees, a former leadership contender from the party’s social conservative wing who was backing Ford, held an impromptu scrum with reporters, calling for the party executive to resign as lawyers for both sides were reportedly scrutinizing the results behind closed doors.

What was going on? Bits and pieces of a theory have begun to filter out in the days since. And it goes something like this: the party’s executive, wary of the bad publicity that had dogged the PCs for weeks in the wake of the Brown debacle – including his own aborted foray to reclaim the leadership – didn’t want to risk drawing out matters more and called it for Ford knowing that if they didn’t, Ford would take the party to court.

A legal challenge was the last thing the party could afford 90 days before a provincial election.

Ford had already gone to court to ask for an extension of the voter registration period only days before, noting that thousands of party members had not received their PIN in the mail to cast a ballot. That bid was unsuccessful.

Turns out, a number of Ford backers in the camp of leadership ally Tanya Granic Allen, who are now taking credit for delivering some 9,000 votes for Ford, had reportedly sworn affidavits for a legal challenge in the event there was some question about the vote.

After some backroom jostling between Ford’s and Elliott’s lawyers, Ford was declared the winner at around 10:30 pm.

Elliott wouldn’t concede alleging “serious irregularities” in the voting. A statement released by her campaign claimed that the votes of “thousands of members” had been assigned to the wrong ridings.

She relented some 20 hours later expressing “confidence” in the vote. Elliott, who had run for the leadership on two previous occasions and lost, was taking another one for the team.

Ford’s path to the premier’s office looks like a cakewalk.

But despite all the talk of party unity, the truth is fewer than a third of PC members, some 65,000 of an estimated 190,000 total members, took part in the vote. A little more than half of those voted for Ford as either their first or second choice on the ballot.

Ford also has little support among the 29-member caucus, only two of whom supported his leadership bid. Similarly, only three candidates nominated to run for the PCs endorsed him for leader. Just how hard they’ll work for Ford out in the hustings is an open question.

There’s also still some question, for example, where Granic Allen, the woman who put Ford over the top, will be running. She tweeted on Tuesday that one possibility is Newmarket-Aurora, but that’s where Elliott is reportedly seeking the party nomination.

And besides a blanket promise to revisit the sex-ed curriculum and kill the carbon tax proposed under Brown, there has been little in the way of policy from Ford, except the usual buzzwords about Ontario being open for business and finding savings in government waste. Where have we heard that before?

There’s also a lot riding on this election for the PCs, who have blown what looked like insurmountable leads three times before. Elections in Ontario have historically been won in urban areas, and the PCs are a mostly rural rump. Ford’s connections to questionable characters likes Charles McVety, an early endorser, won’t play well with women either. And should those lofty (and questionable) poll numbers start slipping, then what?

The Libs, meanwhile, have fashioned a platform built on helping the very working-class folks Ford purports to call his base. See minimum wage. See basic income. See free prescription drugs and grants for tuition. But it may not matter.

No winning for Wynne

After 15 years in power, and poll numbers showing an overwhelming appetite for change, there may be little left for Wynne and the Liberals to do but try and contain the damage.

The hate-on for the Liberal leader has become visceral, so much so that there was talk within her own party of replacing her just a few months ago. But the jury is still out on whether that would have made any difference, since what we may be witnessing in Ontario are the residual effects of Trump’s election south of the border and Brexit before that. The populist wave, which many thought had crested with Trump, is gathering again in Europe and lapping at Ontario’s shores.

Venture into small-town Ontario devastated by the loss of manufacturing jobs, a new theme in Ford’s repartee, and you’ll know what the Libs are up against.

The animosity toward Wynne is not just about the oft-talked “scandal” over the mothballing of a gas plant – and the attempt to cover up the fact that it was a purely political decision – under McGuinty. Or hydro rates, although they are not, as Ford likes to claim, the highest in North America.

None of that seemed to matter last time when Wynne won hands down.

It’s true that in politics, women are usually held to a higher standard (see Hillary Clinton). And in Wynne’s case, it’s hard to ignore the vitriol of the army of online trolls who have targeted her. The PCs have helped fuel the outrage with attack ads that portray Wynne as a character out of a 50s-era B-rated horror flick. It’s been a months-long campaign of vilification (and objectification) aided by the PCs’ friends in media.

This week, it was Sun headlines quoting alt-right guru Jordan Peterson describing Wynne as “reprehensible,” and “the most dangerous woman in Canada.”

There’s also audio making the rounds allegedly outing the premier’s hostile views on old, white folks, of which she is one. Wynne’s comments in the audio on why young people should get out and vote were, of course, more nuanced than is being reported, but that seems of little consequence.

Like the perfect storm that blew brother Rob into office, DoFo seems to be riding another wave of voter anger in Ontario.