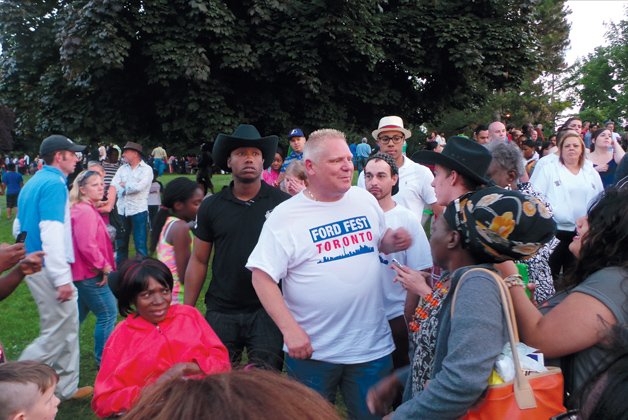 Thankfully, the Legislature is officially on summer break as of this week, so presumably we will be spared more Ford foolishness and BS in the foreseeable future. It’s been an exhausting and soul-crushing year under Ford. The Pride development is just another chapter in the clown act Ontarians have been subjected to.

The “breaking news” that Ford will be taking a pass on Pride festivities is not really news at all. That’s because: a) Ford said some time ago that he won’t be attending Pride, and b) everybody knows the premier is a political opportunist – not to mention, a homophobe.

Officially, Ford is not attending because the cops have been  excluded from participating by Pride organizers. That’s not quite right. Cops are more than welcome to attend the festivities. It’s only cops in uniform and carrying weapons that have been uninvited after a vote of the Pride membership earlier this year.

The truth is Ford has never been comfortable with the gay community. There’s a clear pattern of bad behaviour and a long record of offenses.

One of the first promises he made when he ran for the PC leadership was to repeal the sex-ed curriculum, which many in his base opposed for its teaching about same-sex relationships and gender identity.

Then there are the anti-gay fundamentalists like Charles McVety that Ford counts among his staunchest supporters. McVety, who is the president of Canada Christian College, was a special guest at the first provincial leaders’ debate and was invited to the ceremony when Ford was sworn into office.

McVety is no closet homophobe. He has been at the centre of anti-gay campaigns since anyone can remember. But he’s not the only one with virulent anti-gay views that Ford has cavorted with.

Tanya Granic-Allen, a member of the Catholic Civil Rights League and former spokesperson for the Campaign Life Coalition, tossed her support behind Ford in the PC leadership race. Ford repaid her loyalty by handing her a riding in Mississauga to run in. Until, that is, video surface of her making hateful remarks about gays and Muslims in 2014. Ford was forced to dump her, but that was only because she became a political liability in what was a crucial 905 riding.

On the other hand, Andrew Lawton, another PC candidate hand-picked by Ford to run for the party, was spared the axe for a Facebook post in which he tried to minimize hate crimes against gays by comparing their numbers to the number of people infected with HIV every year in Canada. Lawton later blamed the transgression on mental health issues he says he was experiencing at the time. The excuse was good enough for Ford.

In fact, the entire election was characterized by an anti-gay undertow. Do we really need to be reminded of the homophobic slurs hurled at Kathleen Wynne? Ford did zilch to distance himself or subdue the resentment from those in his party who clearly had a hate-on for Wynne because she happens to be gay.

There’s no sugar coating it. With Ford the proof in the pudding goes all the way back to when little brother Rob was mayor of Toronto.

Back then, not a year went by when city funding for Pride wasn’t threatened and turned into a political football.

When gay protestors showed up at Ford Fest to protest, they were called “faggots” by Ford supporters. Doug apologized for that one, but blamed protestors saying that they were “looking for trouble.”

He had less to say when Rob ordered the rainbow flag taken down from a flag pole in Nathan Phillips Square during the Sochi Winter Olympics. The banner had been raised to protest anti-gay laws imposed by Vladimir Putin ahead of the Games. But Rob saw it as unpatriotic gesture not to fly the Canuck flag.

Doug has gone so far as to suggest that his brother couldn’t be homophobic because, well, he had gay friends. Where have we heard that one before?

Like his late brother, Doug has had ample opportunity to prove his critics wrong on Pride. But he never attended the parade during the four years he served as a city councillor, either. When confronted about that he remarked that he would not take his kids because of “buck naked men running down the street.”

One year, he hid behind the excuse that the July 1 weekend was reserved for Ford family fun at the cottage in Muskoka. It’s a family tradition, he said.

Ford has claimed to have no issue with the LGBTQ community. He’s boasted about donating to Pride. But the evidence tells a different story.