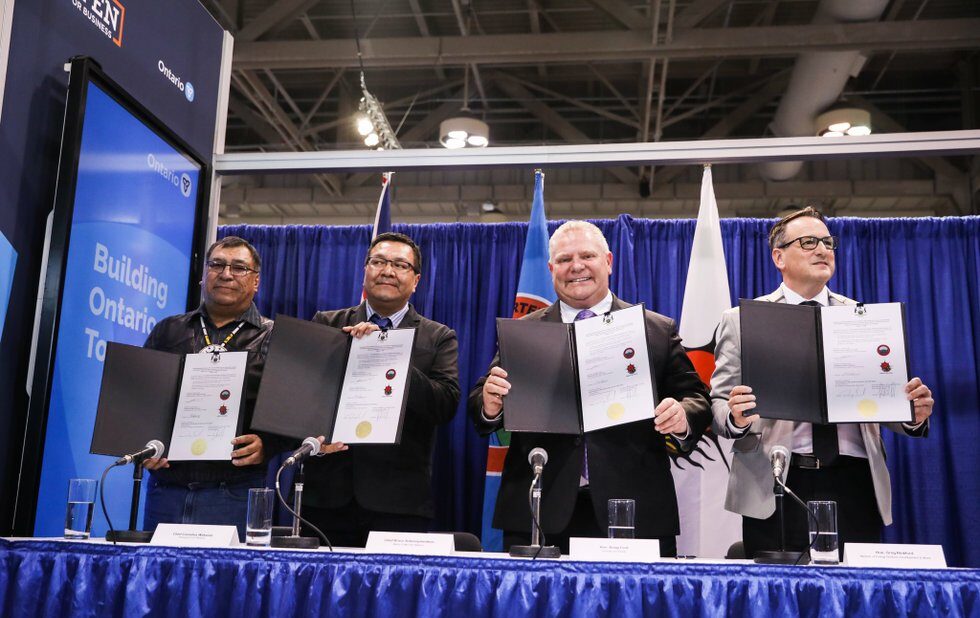 But despite nearly two decades of intense industry interest in the region, which is currently only accessible by plane, the Ring of Fire remains undeveloped, with some initial industry stakeholders leaving for greener pastures.

Ford used the annual convention of the Prospectors and Developers Association of Canada (PDAC) to rekindle interest in the mineral-rich zone, sharing the podium with Greg Rickford, Minister of Energy, Northern Development and Mines and Minister of Indigenous Affairs, Webequie First Nations Chief Cornelius Wabasse and Marten Falls Chief Bruce Achneepineskum to announce plans to build a road into the area.

“Not only will this road unlock jobs (and) economic opportunities for our First Nations in northern communities, it will provide access to health care (and) social services,” Ford declared from the trade floor’s Ontario pavilion.

Achneepineskum tells NOW the announcement demonstrates government interest in improving the situation for local First Nations. “It’s a start, and we hope to see that we come to meaningful agreements in the near future,” he says.

However, the agreement doesn’t include seven other First Nations communities inside the Ring of Fire.

In a news release following the announcement, Fort Albany Chief Leo Metatawabin says the province didn’t consult his community even though the community had been in consultations set up by the previous Liberal government around two other road projects in the region. He says an all-season road proposed by the current government would have major impacts on traditional territories.

“Our people will not accept this,” Metatawabin says.

Ford’s announcement comes at a fragile time for reconciliation. While the Wet’suwet’en hereditary chiefs have reached a tentative deal with provincial and federal governments regarding general land and title rights, core issues remain unresolved.

Local opposition to Coastal GasLink’s pipeline, while not unanimous, remains significant. The fact that other elected band council chiefs feel left out of the discussion highlights the fundamental underlying governance complexities with First Nations.

That legacy spilled into discussions around mineral development at PDAC.

At a session on Indigenous consultations in environmental assessments, Chief Dean Sayers of Batchewana First Nation near Sault Ste. Marie told the audience that the 21 chiefs within Robinson-Huron Treaty lands never ceded jurisdiction over their territories. He says companies looking to do business in the area need their permission, not Ontario’s or Canada’s.

“We will not allow development without our permission,” Sayers says. “Canada and Ontario, you cannot continue to live this fallacy, telling people you can give them something when you don’t own it.”

At a session on legal trends, Chief Wilbert King of Gull Bay First Nation north of Thunder Bay says it’s not up to the Crown and resource companies to decide which Indigenous leaders to acknowledge.

Sandra Gogol, a lawyer with Miller Thomson, offers that the onus is on Indigenous communities to establish the institutions speaking on their behalf and to bring evidence of that forward in court when disputes arise.

Chad Norman Day, president of the Tahltan Central Government in BC, whose four children share Tahltan-Wet’suwet’en heritage, says Indigenous communities need to sort out their own governance.

“When we want reconciliation with third parties, we need to reconcile ourselves first… so we can be united when we go to the outside world and say we don’t want this project or we’re willing to work with this project. That’s not happening right now in a lot of First Nations.”

Day says an airtight process “is a lot better than seeing blockades and everybody with their hands up in the air not knowing what to think.”

While supporting industrial activities on their lands when communities are properly engaged and give consent, Indigenous leaders at PDAC expressed considerable respect for protest actions, including blockades of rail lines, in support of the Wet’suwet’en.

Jennifer Constant, band councillor with the Mattagami First Nation north of Sudbury, spoke about the longstanding extractive activities in her region but says Canadians and potential resource partners need to understand the deceptions and other problems that took place when treaties were signed.

“Anybody in this room, if you’re sitting with Indigenous people you really have to take the time to learn about the true history of the territories you’re working within,” she says.

Ed Sackaney, a traditional knowledge keeper who conducted a smudging ceremony to open the PDAC conference, expressed having a “heavy heart” as he recounted elected officials advocating sending in the army and police to deal with recent blockades.

“We’re at a crossroads in this country,” Sackaney told delegates.

Prime Minister Justin Trudeau also made a brief appearance at PDAC. While his speech didn’t directly reference the Wet’suwet’en situation or the protests, he did call for an end to “increasingly contentious and polarized” debate on the environment and the economy.

“Mining has long been a fundamental building block of our economy,” Trudeau says, citing “projects that lift up entire communities, including many Indigenous communities.”