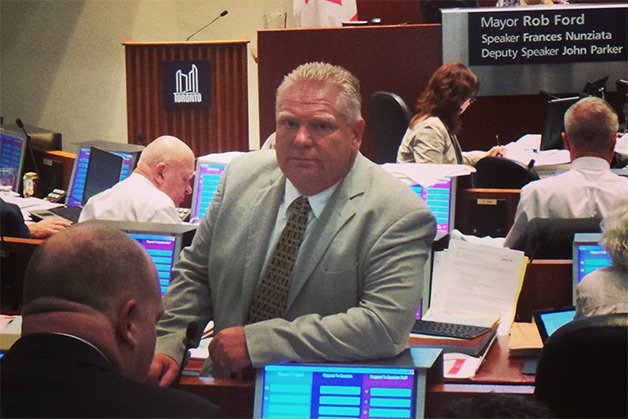 According to the Constitution Act of 1982, Canadian elected officials, provincial and federal, are supposed to provide “Peace, Order and Good Government.”

Clearly, Ontario Premier Doug Ford’s bruited plan to cut city council almost in half to 25 seats – despite a recent mandate from the Ontario Municipal Board to increase the number of seats from 44 to 47 – is unlikely to realize those hopes.

Instead, we have an assault on democracy, and an attempt to rig the outcomes of this October’s municipal elections.

A recent Globe and Mail editorial on Ford’s “swipe at Toronto” concluded by asserting that “It ought to be stopped,” but didn’t say how.

Well, there is one legislative option available, though the federal government has been reluctant to use this power since, most spectacularly, striking down the plan of Alberta’s Great Depression-era Social Credit government to print its own money.

I refer to the federal power of disallowance – the power to, in effect, cancel or nullify provincial legislation.

It is a nuclear option – and the feds have signaled that they have no intention of meddling in provincial politics. But given the tyrannous nature of Ford’s proposal and its autocratic pronouncement, the federal government should be encouraged to raise the possibility of disallowance to force a measure of consultation – by referendum at least – so that 3 million Canadians do not see their powers of effective local governance stripped away unilaterally by a democratically dysfunctional premier.

There are predictable effects from not doing so.

Local governance will suffer. The idea that a city councillor should represent the same number of electors as a federal or provincial representative of government  is ludicrous. Local government requires closer-to-the-people representation, to deal with on-the-ground and up-close issues.

To have fewer councillors means fewer elected officials to respond to taxpayers’ interests, ideas and issues. It means that consultation decreases, or becomes so abstract as to be inconsequential.

Ford’s supporters say his move will save something like $9 million per year. According to that logic, we should make do with zero councillors.

Without adequate council oversight – and 47 councillors are better than 25 at achieving that – we’re likely to suffer more local abuses of authority and more potentially lethal levels of incompetence – not to mention corruption.

The outsized influence of money in determining who may win elections will go up. We begin to look like a city defined by who can raise the most money to gain a council seat – and less like a city that is of the people, for the people and governed by a representative sample of the people.

Ford’s move will have the effect (unintended or not) of neutralizing a number of challenges by candidates from minority communities against established right-wing incumbents – for example, Toronto school board trustee Tiffany Ford’s bid in Jane-Finch against Ford pal Giorgio Mammoliti.

The fewer councillors we have, the more beholden they will be to monied interests. To attract campaign contributions they may relax crucial regulations or fail to enforce vital by-laws, or rescind them altogether, or privatize essential services. We get more potential criminality and less political oversight.

One other democratic deficit is noteworthy here. Currently, municipal politics involve not only the elected but also their staffers, and serve as a training ground for future candidates seeking provincial or federal office. To reduce the number of often progressive Toronto councillors will hurt the NDP provincially and the Liberals federally.

Ontario premiers like Ford who assume autocratic personas don’t end up favourably in history books. Mitch Hepburn and Mike Harris are two examples. Their premierships ended in disgrace because their governments provided the opposite of peace, order and good government.

George Elliott Clarke teaches African-Canadian literature at the University of Toronto. His most recent book of poetry is Canticles I: MMXVII (Guernica Editions).