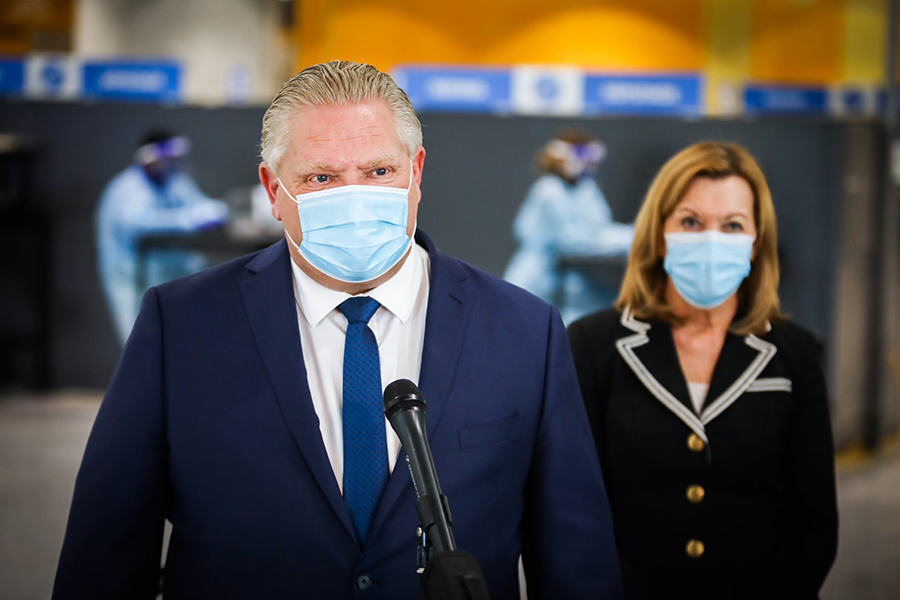 Ontario marked a coronavirus milestone last week – January 25, 2021, was the anniversary of the first COVID case in the province. It was called “presumptive” back then. A lot has happened since including the emergence of a more contagious – and potentially more deadly – variant of the virus.

That could have been predicted. Scientists had been warning from the get-go that COVID-19 is a highly mutable virus. But few could have predicted how badly Ontario has crashed and burned in its efforts to contain the virus.

If you’re familiar with the children’s fable about the scorpion and the frog – it’s about people who can’t resist hurting others even if it means hurting themselves – then you know all you need to know about Ford’s more recent debauchery on the pandemic.

That may be too easy an appraisal for the Ford critics who expected the premier to fail spectacularly from the start. Most Ontarians were willing to cut him some slack.

But the deeper we get into a second wave of the pandemic, the more the Ontario premier is beginning to display Donald Trump-level negligence on the coronavirus. It’s chaos.

Trump was a COVID denier. And we can see where that’s gotten the United States. Ford is no denier, at least not publicly (and notwithstanding that he’s been caught a few times breaking the masking rules).

But his refusal to deal with the catastrophe (we’ve run out of adjectives) in long-term care, not to mention put in place a plan to keep schools open safely (he’s still sitting on $700 million from the feds), are the actions of someone in denial. Some might describe them as criminal. That’s hard to argue given the death toll – last month was the deadliest so far of the pandemic with 1,658 casualties. The health minister has taken to ignoring that data lately in her daily tweets to update Ontarians on the numbers. He’s still sitting on $6 billion in federal relief funding for COVID-19, which he seems intent on using to pay down the deficit.

Ford’s failures are not just a matter of competence – Ford has plenty of smart people around him to manage the situation. It’s about political will. He figures that as long as Peel and Toronto continue to bear the brunt of the virus the rest of the province can continue pretty much as normal.

Now he’s lying to us about the number of people who’ve been vaccinated. Turns out it’s a little more than half the number we were told earlier. And the guy who’s supposed to be in charge of the vaccine rollout, Rick Hillier, has reportedly taken another job with a defence contractor – as if managing a pandemic is a part-time gig. Clearly, his appointment was a public relations exercise, to provide “light at the end of the tunnel,” as Ford put it, coming as it did on the heels of another lockdown that looks like could have been avoided.

There has been a lot of PR spin lately from Queen’s Park. Like the re-announcement of testing at Pearson for international travellers. And the six-point plan released last week “to stop the spread of the COVID variants” (four points of which we were already supposed to be doing).

To mark the reopening of some schools in the province on Monday, Education Minister Stephen Lecce announced funding for more teachers and increased testing at schools, which was already announced back in July.

The PC spin machine has also been busy attacking doctors who have come forward to voice their concerns over the province’s return-to-school plan.

It’s all a distraction. Meanwhile, behind the scenes, Ford has picked up where he left off before the pandemic, using the cover of a health crisis to lay waste to conservation laws and let his developer friends run roughshod over heritage regulations on Toronto’s waterfront.

With no legislature in session to hold him accountable and no daily press briefings to force him to answer questions, Ford has basically gone AWOL, save for his daily messages on Twitter. He’s cut and run.

We’ve seen this before; last time his government was facing a crisis of confidence over his former chief of staff’s patronage appointments Ford high-tailed it to Alberta for some photo opportunities with his bud Jason Kenney, who not-so-coincidentally is making a mess of his own government’s response to the coronavirus. Back then the question was: Who’s calling the shots at Queen’s Park? The same can be asked now.

It’s hard to know for sure. Ford has worn two faces during the COVID crisis.

On the one hand, he’s told the public everything it wants to hear on following the advice of his medical experts. On the other, he’s presiding over a divided caucus (and cabinet) who are growing louder in their questioning of lockdown measures.

Roman Baber, the former York Centre MPP who got the boot from caucus two weeks ago for suggesting in a letter to Ford that the lockdown is killing more people than the coronavirus, says Ford is more worried about getting re-elected. He may be right about the latter.

It would explain a lot about Ford’s indecisive approach to the virus, which seems tailored to meet the bare minimum safety requirements to keep COVID in check, while not angering the Conservatives in his base (there are a lot of them) predisposed to Baber’s view.

What makes the current situation all more infuriating – and sad – is that it could have been avoided (as other jurisdictions have proven) if proper testing, tracing and financial supports like paid sick leave had been put in place from the get-go.

Instead, Ford thought he could play both sides. So here we are a year later with a bigger disaster on our hands than even Ford’s harshest critics could have imagined.