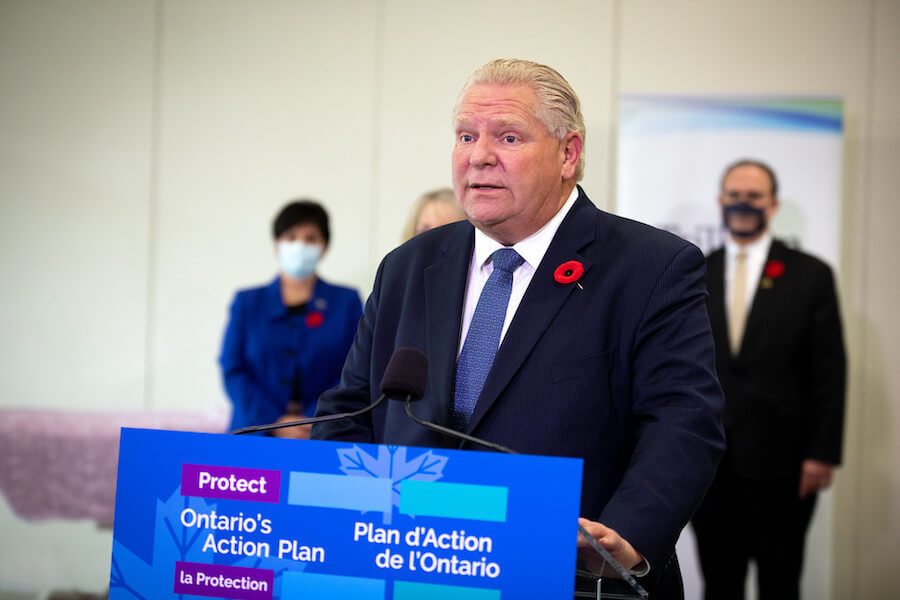 Premier Doug Ford expects to announce new lockdown measures for Toronto, Peel and York later this week as COVID-19 cases continue to surge in those regions.

“The virus is spreading at an alarming rate in these areas. The situation is extremely, extremely serious,” he said at a Queen’s Park press briefing on Wednesday. “We’re looking at lockdown in Toronto, Peel and York.”

Ontario reported another 1,417 new COVID-19 cases earlier in the day, as well as 32 new deaths – the highest single-day death toll in the province since mid-June.

The seven-day rolling average for new infections is now 1,422.

Last week, Ford announced stricter measures as part of the province’s COVID-19 warning framework. At that time, he said he asked Ontario’s Chief Medical Officer of Health Dr. David Williams to look at taking further action and to report back this week.

Ford says he expects to hear Williams’s resulting advice in the coming days. He will then discuss the recommendations with cabinet and make an announcement on Friday.

During today’s press conference, the premier scolded people who continue to have private gatherings and parties and harass public health officials. He specifically singled out the people who attended a birthday party in a commercial storage locker near Kipling and Bloor over the weekend.

Toronto Fire Chief Matthew Pegg said earlier in the week that police fined a 27-year-old woman $750 for violating provincial gathering limits by hosting the party of around 100 people overnight from Sunday to Monday.

“I’m done with people holding parties, having get-togethers,” Ford said. “Unfortunately everyone in those regions will have to hunker down. They end up paying the price because careless people out there are holding these parties.

“So be prepared on Friday and you can look at each other and say, ‘Why are we in this position?'”

Toronto, Peel, York, Halton and Hamilton are in the “red” level of the provincial COVID-19 framework.

Toronto Mayor John Tory has also said the city is looking at implementing even more measures under Section 22 of the Health Protection and Promotion Act.

On Wednesday during a press briefing at city hall, the mayor said that Medical Officer of Health Eileen de Villa has made recommendations to the province for further restrictions, and the city is awaiting a response.

Toronto Public Health officials are also discussing further measures with counterparts in surrounding GTA regions “to determine the best way to put the brakes on this virus,” Tory said.

Tory and de Villa said they could not discuss the specific recommendations at this time.

“More needs to be done,” Tory said, adding that any lockdown measures affecting Toronto should apply across the region so the rules are clear and consistent. “[The province has] a very complete understanding of what we think is necessary for Toronto.”

De Villa said the city confirmed 445 new COVID-19 cases in the past 24 hours. There are now 191 people in hospital in Toronto, including 44 people in intensive care units – up from 176 and 42 on Monday.

The per cent positivity rate in Toronto for COVID-19 tests is 6.2 per cent, up from 5.2 per cent a week ago.

“For parents, this is something to think about seriously,” she said. “As a parent to teenagers, I know that as younger people become more independent, it doesn’t always appear that they are taking our advice seriously.

“I know firsthand that our advice is seldom ignored entirely,” she added.

Tory added that local testing centres are reporting that hourly wage workers are afraid of testing positive for fear of losing income. He urged employers to take action to prevent outbreaks and protect staff.

“I know many people are terrified of losing their jobs and their paycheques that come with those jobs,” he said.

Last week, provincial public health officials released stark modelling projections that said daily COVID-19 case counts could reach between 6,000 and 7,000 per day in December if no new measures are implemented.

This story has been updated with information from Toronto’s press briefing.