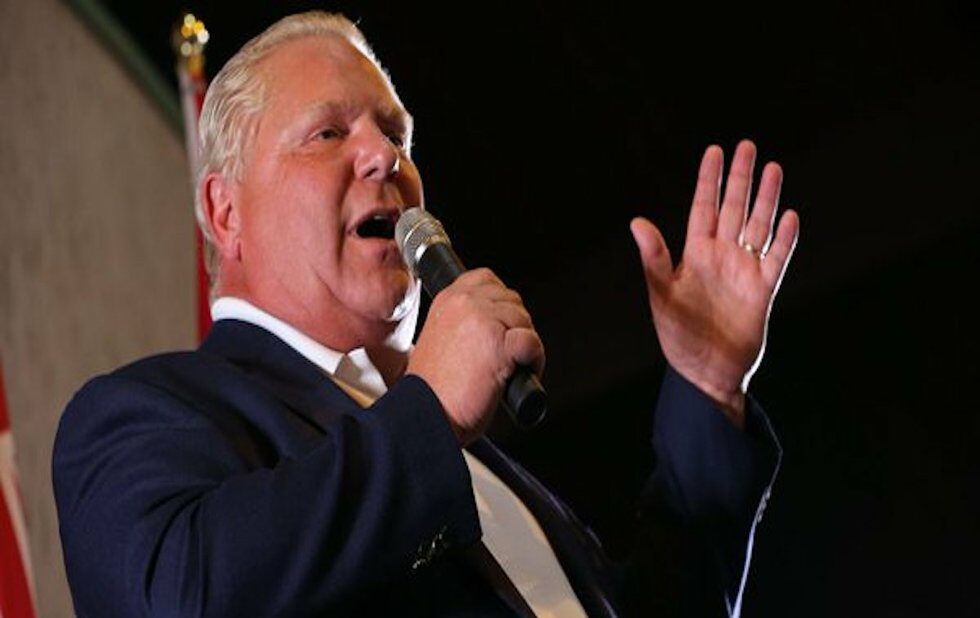 Opposition MPPs want Premier Doug Ford to explain why he secretly met with a China-owned company seeking to extract some 1.6 million litres a day from an aquifer in Guelph/Eramosa Township.

According to the NDP, the province’s integrity commissioner has no record of the meeting, or any record of lobbyists registered to act on behalf of the company with the province.

Ford mentioned the meeting during an exchange with Green Party leader Mike Schreiner during question period in the Legislature on September 17.

Ford rose to respond to Schreiner’s question about Ford’s plan to cut Toronto council in half.

But rather than answer that, the premier tried a bit of deflection and railed against a decision by “Guelph,” which Schreiner represents, to reject a plan by glass manufacturer Xinyi Glass to set up a facility in the southern Ontario city.

“I’m sure there are jurisdictions all around Ontario that would love a glass company,” Ford crowed. “Who refuses 400 jobs?” he added, before saying Etobicoke or Scarborough would be happy to take them.

Except, the decision to reject Xinyi’s application was made over environmental concerns that the proposed facility would drain the region’s drinking water supplies.

To add insult, the decision was made by Guelph/Eramosa Township, which is in Wellington County just outside Guelph, an area represented by one of Ford’s own MPPs, Ted Arnott, who doubles as the Legislature’s Speaker.

In an open letter to Ford, Schreiner describes the premier’s response to his question as “discouraging,” and Ford’s meddling in a local decision “disturbing.”

“Guelph is the largest city in Canada that relies on groundwater for its drinking water,” writes Schreiner.

Susan McSherry, spokesperson for GET Concerned, which led opposition to Xinyi’s proposal, is particularly outraged by Ford’s focus on jobs because “Xinyi intended to bring temporary workers with them, house these workers on the isolated, industrial site in permanent dormitories, and kept changing the number of jobs that would be made available to local residents.”

While residents of Guelph/Eramosa Township are relieved that an additional threat to potable groundwater has been stopped for now, a very real problem remains: how to prevent the further commodification of drinking water in the region with Ford now in office. Nestlé, for one, whose permits to extract water for bottled water were capped by the previous Liberal government, is still very much a concern.

Andrea Muehlebach, associate professor of anthropology at the University of Toronto, says, “Ford’s meddling with local democratic decision-making is not only politically dangerous, but wrong-headed from the perspective of environmental resource management.”

She notes examples around the world where water had been commodified and sold for profit, including Paris, Berlin and Barcelona, and then re-municipalized after years of privatization led to cutting corners on infrastructure repairs. Hamilton is another example.

In March, local non-profit Wellington Water Watchers collaborated with the Loop Gallery in Toronto in the exhibit Water Advisory!

Co-created by Idle No More co-founder Crystal Sinclair and Guelph-area artist and environmental activist Rochelle Rubinstein, it was equal parts art and a call to action to help support initiatives that protect local watersheds, in particular extractions by water-bottling companies.

Rubinstein, also a volunteer with Wellington Water Watchers, says, “Those who want to commodify water assure us that there is plenty of water in Ontario. But nobody can make that guarantee.” She notes shortages faced in the area, including by local farmers.

The issue of the commodification of water is clearly not limited to Guelph/Eramosa Township. Ontarians are also concerned about Ford’s abandoning of green energy projects and recent plans to open Ontario to more natural gas development.

Schreiner says the premier should “respect the people of Guelph/Eramosa Township… and fully disclose the details of [his] closed-door meeting.”