Doug Ford wreaks havoc on Ontario under cover of COVID 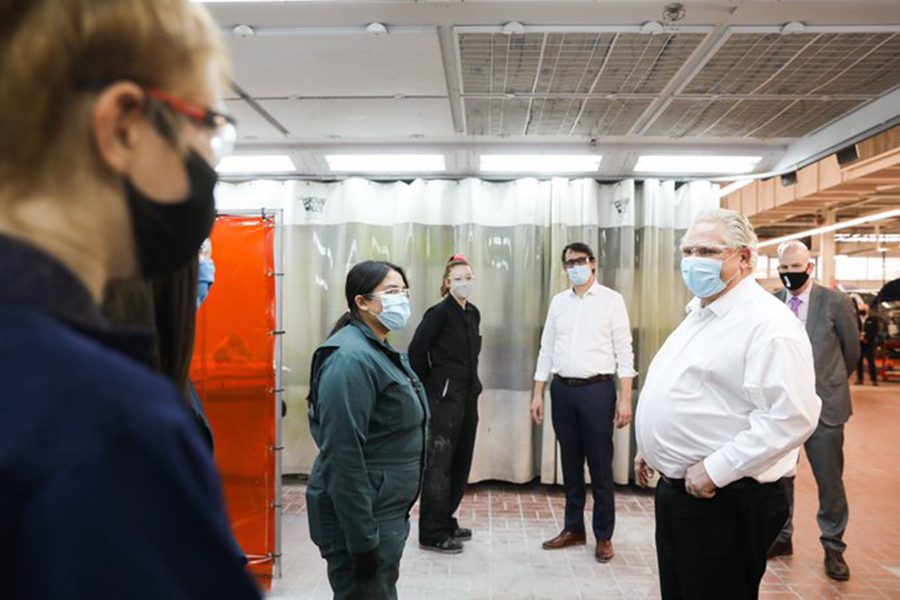 At this point, we shouldn’t be surprised by anything Doug Ford does. His bad rep precedes him.

The latest storm surrounding the Premier illustrates just how far he is willing to bend over for his developer friends. The whole thing stinks to high heaven. But it’s merely another new low in a political career full of dubious distinction.

To recap: the Preem pulled another fast one last week, sneaking a change to the Planning Act that would give his Municipal Affairs Minister Steve Clark – who’s looking more like Mini-Me to Ford’s Dr. Evil every day – the power to fast-track development pretty much wherever he wants over local objections.

The proposed change will clear the way for a controversial development in the Lower Duffins Creek wetlands area straddling the Pickering-Ajax border. To add insult, the development is currently the subject of a legal challenge filed by Ecojustice on behalf of Environmental Defence and Ontario Nature. Ecojustice is seeking to have the original ministerial zoning order (MZO) used to approve development on the site declared unlawful “for failing to comply with provincial law and policy.” Now Ford wants to change the law to circumvent the lawsuit.

The Lower Duffins Creek area is also supposed to be part of consultations announced recently by the province to expand the Greenbelt.

When it comes to his developer friends, Ford is more than willing to break the rules. Ford’s proposed change to the Planning Act was hidden in a bill to expand broadband in rural areas. It’s not the first time he’s tried to slip unpopular policies in unrelated legislation during his tenure. The pandemic has provided cover for his pathology.

But slowly, more of the deception that’s been going on behind the scenes as Ontarians busied themselves dealing with the pandemic is beginning to see the light of day.

Just this week, for example, Democracy Watch announced they’re taking Ontario integrity commissioner J. David Wake to court for failing to penalize lobbyists who didn’t bother to register and disclose their lobbying activity with the government – in some cases, for more than a year. According to Democracy Watch, 23 lobbyists have violated that law since Ford came to power in 2018.

It’s no coincidence. It’s actually part of a pattern writ large throughout Ford’s political career. Ford is fond of saying that government should be run like a business. He’s very much a transactional kind of politician – “I scratch your back, you scratch mine.”

We saw it when he was riding shotgun for brother Rob while he was mayor of Toronto. Big money developers with connections to the Ontario PCs were front and centre back then too, on proposals to develop the Port Lands, not to mention build that subway to Venus in Scarborough. Doug’s city hall office practically served as a storefront for the Ford family business. A number of conflict of interest violations would follow. With Ford, if you really want to know what he’s up to, just follow the money.

We’re seeing it again with Ford as premier.

Hard to remember now in the COVID haze, but before the pandemic hit Ford was well on the way to dismantling the social-welfare state in Ontario, like his idol Mike Harris did. Only Ford’s plan is not just to cut the shit out of essential services, it’s to privatize education. On that front, the infrastructure to push the Ford government’s online learning agenda is already in place, thanks to COVID. And last week it was revealed that Ontario will be cutting the education budget by $1.6 billion next year.

Ford’s former colleagues on Toronto city council who know him best have been warning us for months not be fooled by the nice guy routine at daily COVID press briefings. To be sure, the city has been closer than most to the fallout from the unilateral actions of the Ford government. It’s spawned a Charter City movement aimed at getting Toronto out from under the province’s thumb.

Ford may no longer be on council, but just like the old days his efforts to mess with the program continues, in particular on Toronto’s waterfront where Ford continues to do the bidding of his development friends. That was seen most recently with the fast-tracking of development plans for the Corktown-area Foundry site. Over to the west, meanwhile, the future of Ontario Place looms large.

There, Ford has appointed former Toronto police chief Mark Saunders to advise the government on the redevelopment of the site.

By most accounts, Saunders is a nice guy, but he knows diddly about planning, which has left many to scratch their heads over his appointment – unless, of course, the plan is to put a casino at Ontario Place. Then, Saunders’s appointment makes a little more sense.

A casino was part of the plan for the waterfront when Rob was mayor. There were lots of meetings with casino bigwigs – and a lot of money was being thrown around – to sell council on a casino no one wanted. The former Wynne government intervened to make sure it didn’t happen. But now that Doug is holding the keys to the province, he doesn’t need to ask anyone’s permission – he’s got a whole cabinet and caucus to do the dirty work for him.