As hospitals fill up and Ontario's doctors call for a lockdown, the premier seems intent on playing chicken with the virus 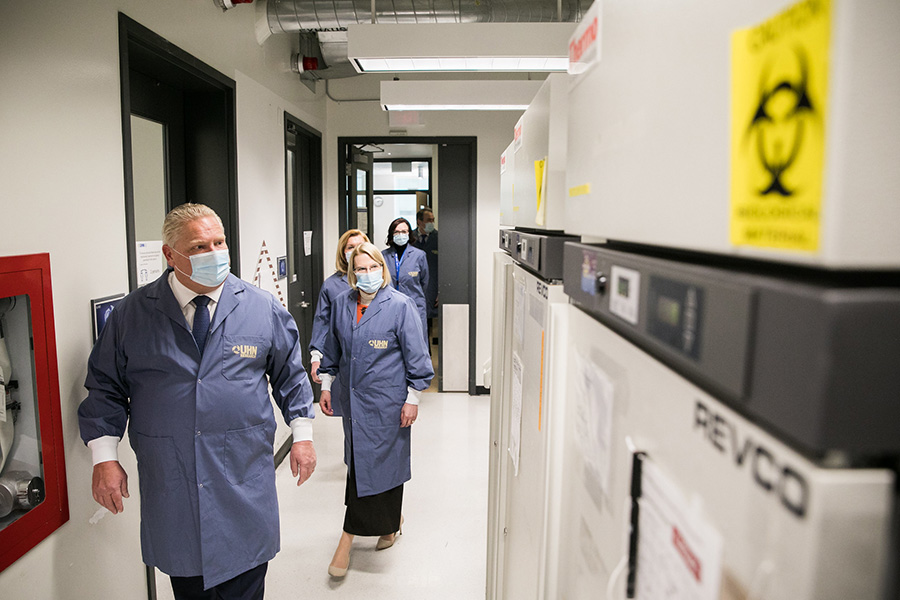 While Ontario’s doctors are calling for a lockdown of the entire Greater Toronto and Hamilton area until after New Year’s to deal with the unnerving rise in new COVID cases, Doug Ford seems intent on playing chicken with the virus – and peoples’ lives.

His response to pleas from both the Ontario Medical Association and Ontario Hospital Association for a four-week lockdown at a press conference to announce more funding for long-term care on Thursday was thanks but no thanks.

“I appreciate their input,” the premier said, of the warning from hospital administrators that hospitals are reaching the “breaking point.” But “Right now, we’re going to continue consulting.”

He added when pushed by reporters that “everything is on the table” when it comes to dealing with the COVID crisis. “We always take advice from the medical experts.”

The only problem is that we’ve heard it all before and we’re running out of options. Another record 2,432 confirmed cases of COVID-19 were reported in Ontario on Thursday.

It’s all very sad to think this all could have been avoided.

But nine months into the pandemic that has turned our world upside down, it’s becoming clearer that Ontario has effed up on a terribly grand scale.

Doug Ford never had a plan – at least, not a coherent one. Worse, when the going got tough, he put his political interests ahead of the province.

While he was the leader we needed in the early stages, when it came time to coordinate a response, Ford turned out to be over his head – or willfully negligent. The list of failures is a long one. He’s failed hospitals. Notwithstanding the latest cash infusion announced Thursday to hire more support staff, he’s failed long term care. He’s failed parents who’ve had to juggle work, daycare and home-schooling. He’s failed school kids.

And just as questions about his government’s handling of the pandemic have started to mount he’s cutting and running, announcing the shutting down of the Legislature until February.

Meanwhile, he’s still sitting on some $12 billion from the feds that could go a long way toward alleviating the suffering but is refusing to spend it.

There have been many opportunities for the Ford government to avoid the mess we’re in.

But instead of using his government’s budget to provide necessary supports – like sick pay for workers, for example – he spent the cash on tax breaks for business. And instead of reinstating the moratorium on evictions, the Landlord and Tenant Board is fast-tracking evictions. Meanwhile, people are being forced to live outside in tents and makeshift styrofoam shelters in downtown Toronto because the shelter system is overcrowded and unsafe.

Has Ford’s empathy play all been a ruse? It would seem so.

The recent auditor’s report described the province’s handling of the pandemic as “disorganized,” while listing a litany of other shortcomings. The report goes further to say that the province’s chief medical officer of health, David Williams, failed to act “decisively” to stem the tide.

To be sure, some of the province’s top epidemiologists and hospital administrators have been calling for the resignations of Williams and his deputy, Barbara Yaffe, over their management of the crisis, which has varyingly been described as everything from complacent to cavalier.

There was more evidence of that this week when Yaffe was inadvertently captured on a mic before a press conference at Queen’s Park remarking to Williams: “I don’t know why I bring so many papers. I never look at them. I just say whatever they write down for me.”

Yaffe explained in a statement to CTV News later that she was only referring to “research and vetted remarks” given to her by her communications staff.

But her remarks suggest that it’s been politics that’s been directing the province’s COVID response all along.

The veil has slowly been lifted on that fact, most notably after the province initially floated a 10 per cent test positivity as the threshold to enact meaningful COVID restrictions. Thankfully, they never followed through.

Now we’re all paying the price.