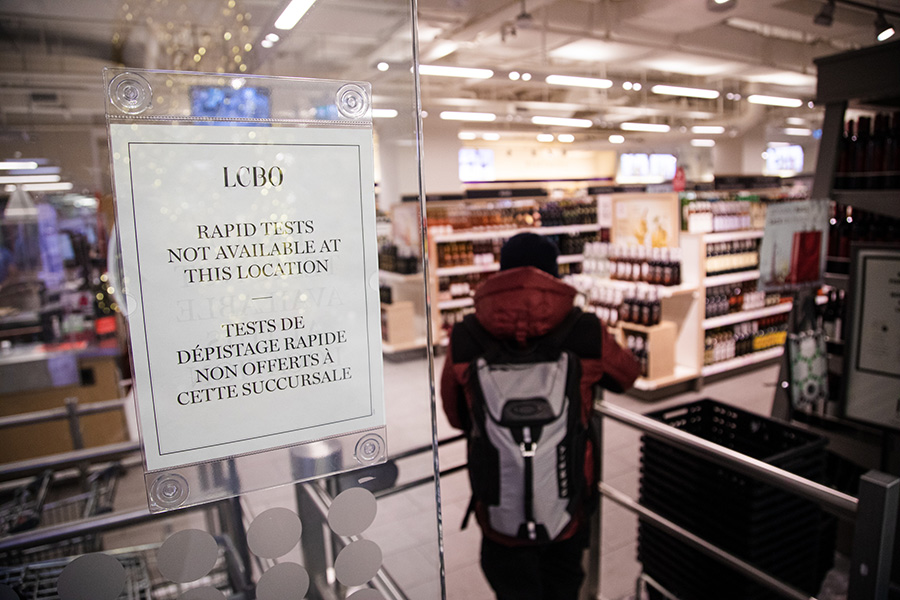 The promised rollout of free rapid test kits at LCBO outlets seems to have stalled.

There have been a lot of big numbers thrown around by Premier Doug Ford in recent days around rapid testing – namely, the “millions” that are being deployed by the province.

The recent wave of Omicron-related COVID cases has led to the setting up of a number of pop-ups as part of an effort to get more people tested and help contain the spread.

The feds have plans to distribute millions more tests to the provinces. Ontarians, however, will continue to face issues getting a hold of them as the province begins prioritizing testing for those in longterm care facilities, the health care sector and education workers.

The province says it has some 65 million rapid tests in the procurement pipeline and another 45 million tests are expected this week from the feds, which is distributing the tests on a per capita basis to the provinces. Ontario is in line to receive the lion’s share of tests from the feds since the province accounts for almost 40 per cent of the country’s total population.

The province had some 5.7 million tests in its inventory at the end of November, but there were few to be had over the holidays as Omicron hit.

The mass deployment of tests would buy some much-needed time to contain the spread of the latest variant until more people can be boosted, but the promised rollout of free tests at LCBO outlets across the province also seems to have stalled. This most recent deployment by the province is looking eerily like the one that followed the arrival of the first batch of rapid tests approved by the feds back in November 2020.

The hope was that the tests would provide timely screening. Except, the decisions on where to deploy the tests were haphazard from the start.

Back then, longterm care and retirement homes were also prioritized. Some 1.2 million tests were part of the initial rollout to those facilities, which were hotspots for the coronavirus.

But the decisions on which homes to deliver the tests to were seemingly left to the six operators “for potential deployment” to some 30 longterm care homes and 27 retirement residences in the province.

The province initially made testing mandatory for staff, residents and visitors at longterm care and retirement residences. But as the tests were rolled out, staff shortages at many of the facilities began to present logistical challenges. Costs associated with having dedicated staff conduct the testing also became an issue for the faculties.

By the time vaccines arrived in the spring of 2021, the province seemed to abandon testing altogether, loosening requirements at the facilities and lifting them completely for those who were fully vaccinated.

Tests were also initially prioritized for staff and patients at some 22 hospitals and assessment centres in the province, but rather than direct those to areas where outbreaks were highest, the testing kits were first distributed in rural and remote communities. Meanwhile, hospitals in Toronto and Peel, which were facing down a third wave, would have to wait for tests for staff and patients.

Businesses were also part of the early rollout of rapid testing, including “industry partners” like Ontario Power Generation, Air Canada and Magna.

The idea was that testing of employees would allow key sectors of the economy to continue to function as workplace outbreaks became key contributors to the third wave. Chambers of commerce would also be included in the rollout.

But by the spring of 2021 (and months into the rapid testing rollout), anecdotal evidence suggests that fewer than half of businesses were actually set up for testing. There were pilot projects in place at some large corporations, but no systemic testing regime.

Meanwhile, as more consumer-friendly and easy-to-use rapid tests were being approved by the feds, it wouldn’t be until March of 2021 that the province would lift the requirement that only health professionals be authorized to administer tests.

While the accuracy of the tests remained an issue early on, rapid testing was still seen as crucial to detecting outbreaks before they got out of control.

They still could be, except the province may have already backed itself too far into a corner with the latest wave to rely on anything but vaccines where the general public is concerned.

While access to rapid tests are increasingly being seen as an important tool in containing fast-moving variants in the future, it looks like the province will continue to rely on vaccines to stem the latest tide, even though boosters are weeks (and months) away from getting into the arms of most Ontarians.