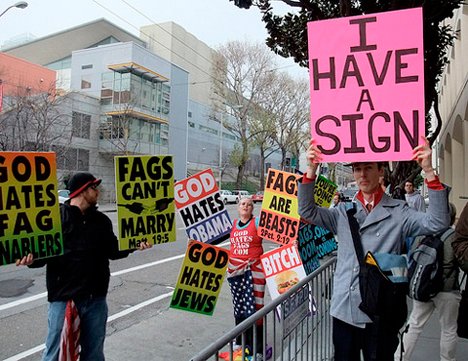 Nothing like some anti-gay wingnuts getting pwned at their own game.

By now, you might’ve heard of the Westboro Baptist Church, a Kansas-based Baptist church and hate group known to picket public events or soldier funerals or anything that gets under their righteous skin.

This past week, Westboro protesters brought their “god hates fags” signs to the Twitter headquarters in San Fran.

Why? Not to protest the tech tool per se, but to tell the site’s owners that they “don’t use their position and voice to warn a generation of rebels of the consequences of their rebellion.” One woman told the media: “Twitter should be used to tell the punks of doomed America that God hates you!”

Well, since Westboro also rallies against Jews, maybe they got something against Mark Zuckerberg?

Thing is, this Westboro protest didn’t go so smoothly for the Baptists. Some of San Fran’s freakiest and savviest came out for a counter-protest, drowning out the Westboro crazies with some music, signs and chants proclaiming “God hates #tags!” and even a girl wearing a raccoon hay proclaiming “Silly hats only”. My fave? A dude with some Bristol board proclaiming the obvious: “I have a sign.”

Thankfully, San Franciscans stole Westboro’s thunder at one of the most useless protests imaginable. Who knows if the Twitter execs heard any of the chants or read any of the signs but let’s just say this counter-protest serves as a useful reminder to all of us about the importance of standing up to hateful bullies, even if their signs are bigger than yours.[rssbreak]