Election: Jagmeet Singh promises to crack down on renovictions 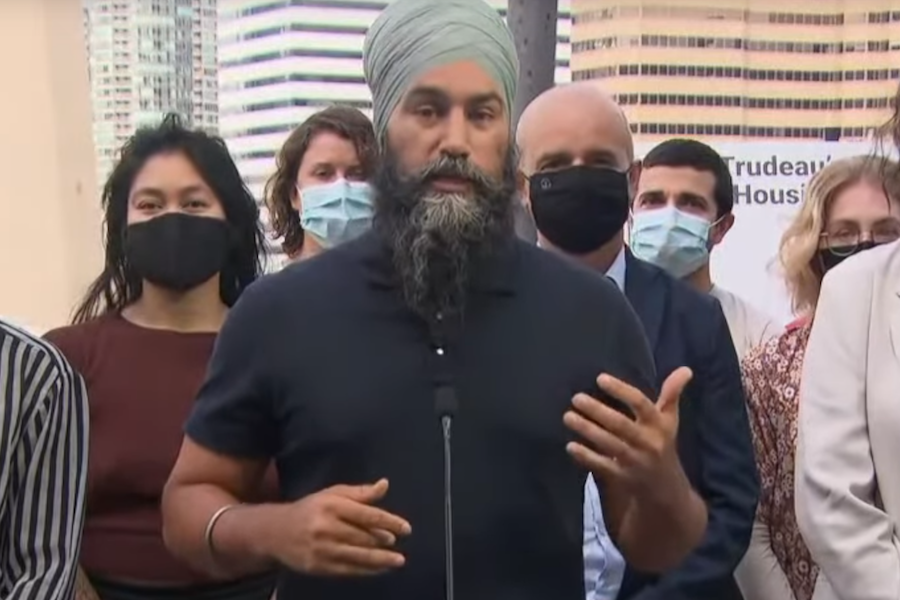 Jagmeet Singh made a campaign stop in Toronto on Saturday to court voters who live in rental housing.

During a morning press conference on August 21, the federal NDP leader vowed to crack down on landlords that “renovict” tenants.

If elected prime minister, Singh said he would impose strict rules on the Canada Mortgage and Housing Corporation (CMHC) that would stipulate the crown corporation’s loans could only be used for affordable housing.

“Renovictions are a serious problem and we’ve seen that across Canada,” he said, adding that for-profit companies have been using “loopholes” and CMHC loans to buy rental buildings, evict tenants by claiming major renovations are needed and then raise prices.

“Having a federal partner will make it better for municipalities, provinces and territories to tackle this housing crisis,” Singh said.

Citing Statistics Canada data, he said two-bedroom apartments in areas with populations of 10,000 and up now cost an average $4,200 more per year than they did when Justin Trudeau became prime minister six years ago.

Singh also said his party would provide a rental subsidy of up to $5,000 per year for lower-income families that would be funded through a tax on the rich.

Rental housing law falls under the purview of the Ontario government. Last year, the provincial opposition NDP proposed a ban renovictions and the creation of a public eviction registry that would identify landlords that frequently evict tenants.

A renoviction is when a landlord evicts a tenant to complete extensive renovations and then re-lists the property for more than the original rent. In Ontario, the evicted tenant is supposed to have the first refusal to move back in without a large increase in rent but in practice landlords often violate this right.

Singh also reiterated his promise to discourage large foreign companies from investing in the Canadian housing market by slapping a 20 per cent tax on foreign real estate ownership.

Prime Minister Justin Trudeau’s Liberal minority government has also targeted foreign home buyers with a one per cent tax that will kick in on January 1, 2022.

In Ontario, foreign home buyers in the areas around Toronto – or Greater Golden Horseshoe Region – must pay a 15 per cent non-resident speculation tax when acquiring real estate.

According polling firm Nanos Research’s nightly election tracking for Bell Media-owned outlets CTV News and the Globe And Mail, the election is narrowing between the front-runner Liberals (34 per cent) and the Conservatives (32 per cent), who have had a 3.9 per cent boost in support since the election call.

The NDP is in third with 20 per cent.