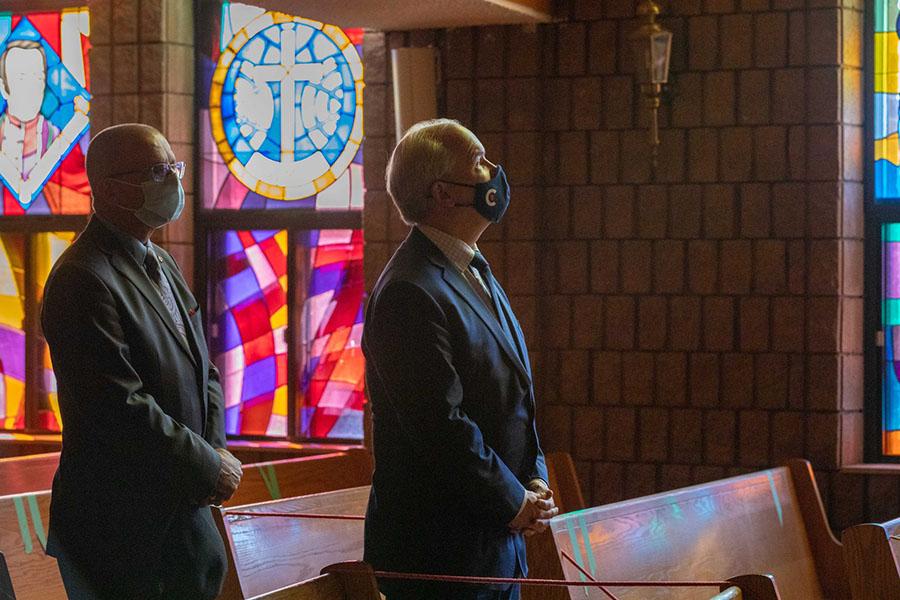 The Conservative party leader may need some divine intervention to save his leadership.

The target on Erin O’Toole’s back just got bigger.

Days after Saskatchewan Senator Denise Batters was bounced for publicly calling for a review of O’Toole’s leadership over the direction he’s taking the party, the Conservative leader is now facing questions over election spending.

Turns out the party blew a cool million on that television studio set up in an Ottawa hotel for the campaign, according to leaks from Global News.

The expenditure was approved by the Conservative Fund, the fundraising arm of the party – whose chair James Dodds happens to be a longtime O’Toole fundraiser – and the party’s national council. That’s not so scandalous.

But given the election results, some in the party are beginning to question the wisdom of the spending and the decision to keep O’Toole locked up in a studio instead of out getting to know voters.

It may have saved the party a bundle – some $2 million according to their estimates – but it proved a disaster for a relatively newly minted leader who was still acquainting himself with the electorate.

O’Toole defended the campaign strategy on Thursday saying that the party “had to be ready for a pandemic election.”

But it’s also true that O’Toole’s inner circle was keen to paper over obvious rifts between the leader and the party based on a range of issues from gun control to women’s right to choose, and they needed to control election messaging. Daily press conferences in a half-filled media studio and online “town halls” with handpicked party supporters proved a cluster you-know-what.

O’Toole’s strategists are at it again – true to O’Toole’s military training – and are adopting a bunker mentality to now beat back questions about his leadership.

Besides the questions about election strategy and spending, Global News also reported this week that O’Toole’s office allegedly used taxpayer funds to purchase some $245,141 in “communications, audio-visual and telecommunications equipment and services” between October 2020 and April 2021. O’Toole’s office has denied any taxpayer dollars were used for “partisan purposes,” as the leader’s opponents step up their assault.

It’s meant to present a newer face of the party and a united front. But instead of fighting for Canadians, O’Toole has been hunkering down and spending most of his time since the election fighting to keep a lid on a caucus revolt, more recently over mandatory vaccines for MPs.

Last week, he reportedly rehired Ontario Proud and Canada Proud founder Jeff Ballingall – he of fratboy memes and O’Toole’s “True Blue” leadership campaign – to head up what’s being described as “election readiness.” An election is at least two years away but this crew seems intent on continuing to fight the last one.

Ballingall’s hire is not so much about election readiness as it is about keeping caucus rebels in line. It also reeks of desperation. Ballingall was a big promoter of focusing Conservative party efforts on social media during the campaign, particularly on Facebook.

Clearly, it didn’t work during the election. It’s not working now with the party essentially refrying the same old same old in its social media messaging since the election, including trying to drum up fears of a Liberal-NDP coalition to keep the base in check.

The Conservative brain trust around O’Toole is running out of ideas. It’s all becoming a little tiresome. How long can the charade last?