Crackdown on postering dicks with democracy

the issue here in committeeRoom 1 at City Hall on a cold Monday (March 25) is all about messiness. And whether councillors value neatness and efficiency over boisterous but sloppy democracy.In particular, it’s about whether acres of often homemade manifestoes and meeting announcements — not to mention commercial posters — should be crammed onto the city’s proposed 2,000 collar-affixed hydro poles.

Briar de Lange, representing the Bloor-Yorkville Business Improvement Association, sums up the intent of the planning and transportation committee’s proposed amendment to the postering bylaw this way: “Freedom of speech is one thing, but it has to be in a more limited area.”

The forces of sanitation say postering is a community blight. Posters wear away into ugly, tattered bits of paper with soggy strips of tape. They’re piled one on top of another and are sometimes illegally plastered on private property. Yes, this is true.

But the process of claiming public space, of allowing people self-expression, will never make the streets Singapore-clean. Instead, we should revel in this disorder, for what speaks through non-commercial posters are our more ragged voices, voices that emerge from the ground up rather than descending from above from well-spun corporations.

It is this we fear losing as the result of the proposed amendments, which would effectively end the period of postering privileges won by a 1994 Court of Appeals. The court ruled then that the pre-amalgamated Toronto’s anti-postering laws violated the Charter of Rights And Freedoms.

A May 29, 2001, memo to city staff concerning the legal implications of this matter says the Supreme Court in 1993 “noted that the City could have achieved its objectives by less restrictive means, including regulating the location and size of the posters.”

How convenient. Some of the current amendments to the bylaw include: poster size limitations (maximum 8.5-by-11 inches), rules about the minimum allowable distance between posters (100 metres), a requirement that a name and number be placed clearly on the poster, the banning of glue and wheat paste, a system of issuing stamps (for a nominal fee), limiting posters to collars placed on 2,000 poles throughout the city (that’s 1.2 per cent of the city’s 159,000 poles) and a $60 fine for failing to do all this.

Posters, one woman at the meeting says, are evidence of societal breakdown. Well, maybe they are. And maybe the more posters we see, the more we’ll realize that we have to do something other than covering it all up, like running homeless people out of town or painting brown grass green, like the Chinese.

“If the city is genuinely concerned with what it calls “visual clutter,’ then it must look at billboards, neon signs and the many other forms of visual “blight’ in our city today,’ Grant Orchard of Citizens Concerned About Free Trade tells the committee.

I would add to that mess: people freezing to death in the streets, children starving, a world at war, and us, here, activists fighting for our very means of acting. But perhaps that’s the point.

In the end, despite motions by Joe Pantalone (to defer until 2004) and Howard Moscoe (to “send it back for more thoughtful analysis”), the new bylaw is forwarded to council for its April 16-18 meeting. Public deputations are over.

We, the posterers, are not the community. We’re part of the blight. And if this new bylaw is passed, a major means of our free speech will occupy only a few narrow corners of our neat and tidy world-class city. Narrow enough to overlook. Easily torn down, tossed away. 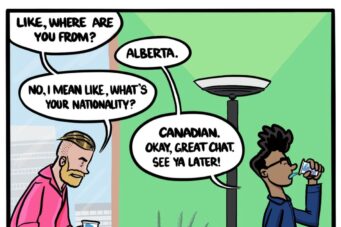 Plus, how psychedelics changed my life, stage 3 COVID truths and a wartime monument that has no place in Canada.