Pedestrians, cars, streetcars – 2010 may be the year of the traffic accident 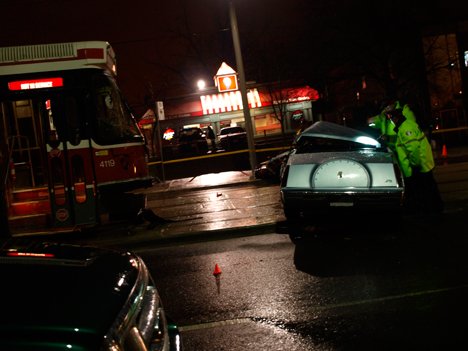 A motorist was sent to hospital with non-life threatening injuries after a collision with a westbound St. Clair streetcar over the weekend.

Emergency response personnel struggled for nearly an hour to free the sole vehicle occupant. Sgt. Stephen Chellew said the man had been attempting to make an illegal left turn onto Winona Dr. He urged urban motorists to take more precautions.

“There are signs everywhere – no left turn, no U-turn,” he said. “Drivers have to be aware of traffic regulations.”

Streetcar lines were shut down in both directions for several hours during the police investigation.

The city has rung in the new year with a rash of traffic fatalities that has everyone talking. The midtown incident highlights the need for motorists to learn how to share the road not only with pedestrians and cyclists, but streetcars as well.

When streetcar meets car there are dire consequences, Chellew stressed.

“It’s 25 tonnes of steel coming right at you,” Chellew said. “What do you think happens?”

The car was dragged 70 m towards Dufferin St. before stopping, he estimated.

This was the second streetcar collision in 24 hours. Police say a man was critically injured late Saturday night when he was hit by a streetcar on Queen near Broadview while talking on his cell phone.

It might be part of a growing trend. In 2008, traffic deaths surpassed homicides.

So far in 2010, pedestrian fatalities have been the story. First the death toll was 7 deaths in 7 days, then the headline was 11 in 11.

Now that 12 pedestrians have been killed on Toronto streets, observers of all sorts are chiming in.

If this continues, look forward to a public debate – perhaps even another war on cars – in the upcoming mayoral race.[rssbreak]