"There's stigmatization of rooming places but glorification of conversions, with no discussion of the displacement of low-income residents," says the Parkdale Neighbourhood Land Trust's Joshua Barndt. 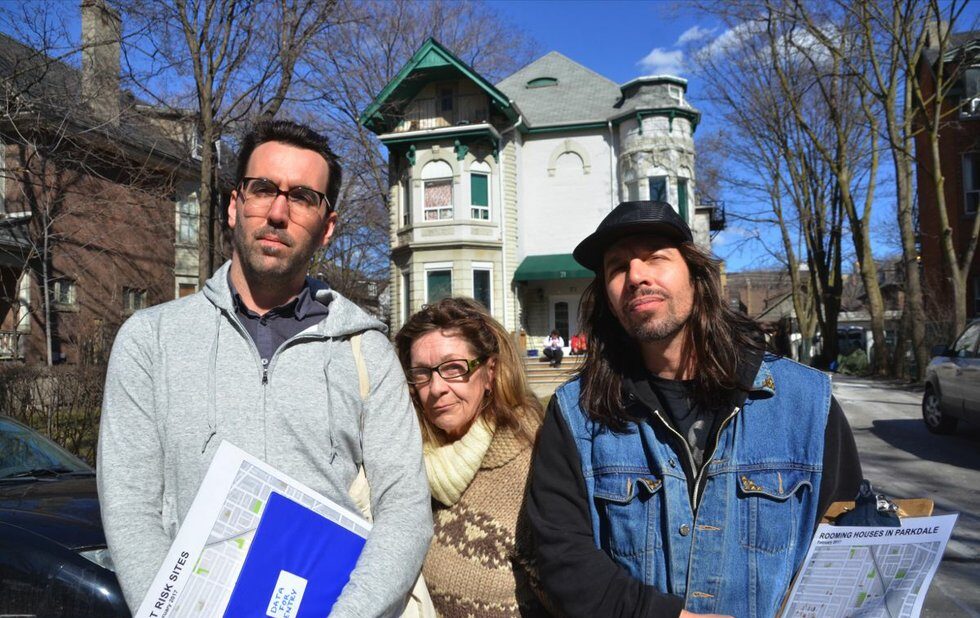 When 40 Beaty went on the market last summer, the building of bachelorettes was described in real estate parlance as an “upgraded investment property in gentrifying South Parkdale” that earned “moderate rents with upside potential.”

Today an “executive micro-smart bachelor” in the now “styling boutique building” goes on Craigslist for $1,297 a month. At 225 square feet, it’s micro, all right.

Whether it’s bachelorette buildings upscaled out of affordability or Victorian mansions converted from rooming houses to single-family homes, the trend is part of a crisis: Parkdale’s rooming houses and bachelorettes are being lost.

“There’s stigmatization of rooming places but glorification of conversions, with no discussion of the displacement of low-income residents,” says Joshua Barndt, development coordinator at the Parkdale Neighbourhood Land Trust (PNLT).

Incorporated as a non-profit in 2014 in response to increasing gentrification and its impact on long-term affordability in the neighbourhood, PNLT is Toronto’s first community land trust. It has already inspired a second in Kensington Market, and the two are learning from each other.

With membership open to any resident and boards elected from and by members, CLTs offer local democratic control over the land they acquire, ensuring it will be used for community benefit while demonstrating its value to the city.

In Parkdale, that means open space for urban agriculture, affordable sites for non-profits and affordable housing.

As corporate landlords like MetCap and Akelius drive up rents in high-rise buildings, community agency staff and residents have witnessed a series of rooming house closures and evictions in the last two years.

Twenty-eight rooming house and bachelorette buildings (which in Parkdale are regulated by the rooming house licensing bylaw) have been converted in the past decade. That’s 347 units.

“We needed to comprehensively assess the state of rooming houses in Parkdale: how many [there are], what condition they’re in and what risks they’re facing,” says research coordinator Lucas Van Meer-Mass.

Who better to help do this research than people who’ve lived in rooming houses? Five were hired to visit every rooming house and interview tenants in at-risk properties.

Van Meer-Mass says the research has demonstrated for the first time the value of rooming houses within the spectrum of affordable housing in Toronto.

“I think we wound up doing some work for the city that might prove a model across town,” says fellow researcher Lynne Sky.

Armed with a list of known addresses from the city, the research team scoured the area bounded by Roncesvalles, the Gardiner, Dufferin and the CP Rail line, and Seaforth and Pearson. They found more than 2,700 residents living in 198 rooming houses and bachelorette buildings.

These numbers were “a huge revelation,” says Van Meer-Mass. “It’s more housing than Toronto Community Housing provides in Parkdale by a large margin.” Within the study boundaries THC units total 1,288.

Fifty-nine of those 198 rooming houses have been classified as immediately at risk. That is, Van Meer-Mass explains, evictions are occurring (usually a sign a property is going to be sold) the building is either listed for sale or will be soon because the owner is getting out of the business there are licensing compliance issues or it’s a bachelorette building with 10 or more units (which, like 40 Beaty, are attractive as investments).

Their status puts at least 800 residents of these properties at risk of displacement. “Any one could be converted within as little as a month,” Van Meer-Mass says, adding that since the study started, an average of one a month has gone on the private market.

“The people we talked to, fear underlies their reality daily,” says Sky.

Besides the number of people in these buildings, this housing stock has another significant social value: a sizable investment of public funds.

Van Meer-Mass explains that according to anecdotal evidence, the majority of Parkdale’s rooming house tenants receive financial assistance through the Ontario Disability Support Program, Ontario Works or some sort of allowance, reflecting at least in part the impact of deinstitutionalization of people with mental illness in Parkdale.

In the 1970s, the province discharged psychiatric patients from the Centre for Addiction and Mental Health and in 1979 closed the Lakeshore Psychiatric Hospital. Parkdale’s big old homes were converted to rooming houses, boarding homes and bachelorettes to accommodate thousands of people discharged from care and offered no help in finding accommodation.

“We effectively have this stock of affordable housing that the public sector’s been subsidizing for decades but over which it has no long-term control,” says Van Meer-Mass.

PNLT’s first purchase, a community garden site, will protect a piece of land for urban agriculture, and in the same way, the trust plans to acquire and protect some rooming house properties by taking them out of private ownership and off the speculative market.

“Sometimes the solutions are right in front of you,” says Barndt. “We have existing housing on existing land with existing residents, so it seems an appropriate use of resources to secure that.”

The garden’s purchase has been funded by a combination of crowdsourcing and foundation grants. The rooming house research will allow PLNT to go to funders with homework done, says Van Meer-Mass. “We’ll be able to say, ‘We know this is a viable site that can provide X number of social housing units in perpetuity.'”

When PNLT acquires a rooming house, it will own the land but lease it to a local non-profit partner – a social service agency like the Parkdale Activity-Recreation Centre (PARC), for example, that can ensure the property is renovated, safe and well maintained, remains affordable and is protected from market interests. There are housing providers in Parkdale capable of that, Barndt says.

PNLT is currently exploring, with a willing private owner, the acquisition of an at-risk rooming house in South Parkdale.

If the project demonstrates that the model works, PARC executive director Victor Willis says the evidence could be used to influence policy change. Currently, the city doesn’t recognize this housing stock as affordable housing even though rooming houses are the least expensive option for people with very low incomes.

“The city’s talking about creating, maybe this year, 800 units of affordable housing,” Willis says. “But we risk losing that many.”

There’s tremendous hardship associated with displacing hundreds of low-income people, many of whom have disabilities, says Van Meer-Mass. Because of the neighbourhood’s history, there’s nothing comparable to Parkdale’s density of rooming houses and hard-wired network of social services, and there are long wait lists for subsidized housing.

“There’s no place left for anybody to go in Toronto,” says Sky. “Housing organizations are going to have to become very resourceful, because many just do not have appropriate financing for what’s going on,” she says. “We’re asking ‘what if?'”

With property in the hands of a community land trust, Barndt says, residents can trust that they won’t be priced out of the community’s future.