An Indigenous group from Ecuador was in the Ontario Court of Appeal last week trying to recover a historic $9.5. 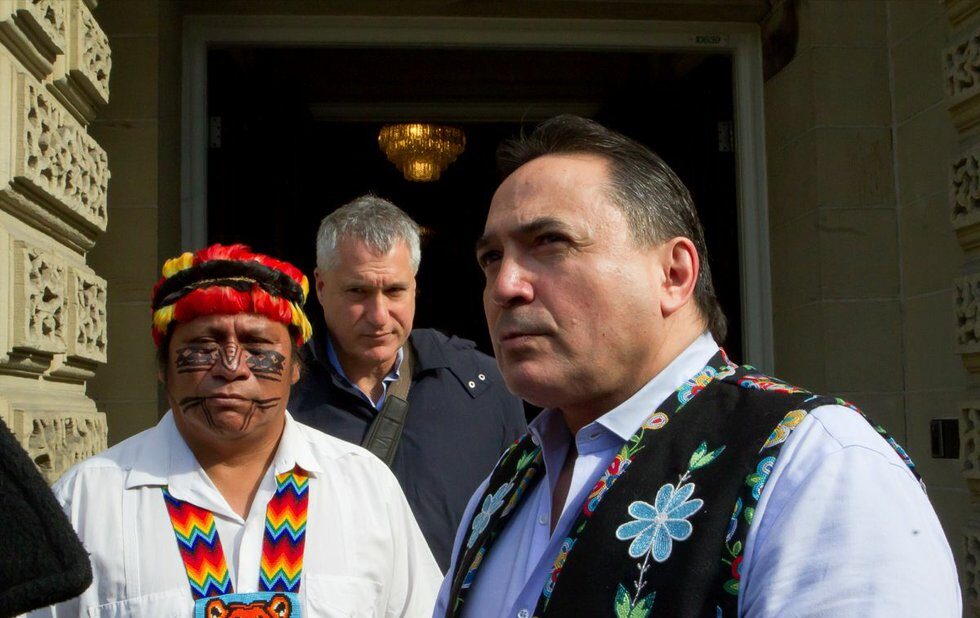 An Indigenous group from Ecuador was in the Ontario Court of Appeal last week trying to recover a historic $9.5 billion judgment ($12 billion with interest) against U.S. oil giant Chevron Corporation.

The plaintiffs in the case, the Amazonian Indigenous Parliament of Ecuador, which represents some 30,000 villagers, are asking the court to enforce an Ecuadorian court judgment from 2011 against Chevron over the dumping of billions of gallons of toxic wastewater near farming communities in the Ecuadorean Amazon that dates back to the early 1960s. Chevron is fighting the Ecuadorian court order to pay billions in damages with an army of 20 lawyers that took up most of the front rows in the Osgoode Hall courtroom where two days of hearings began on Tuesday April 17.

The plaintiffs argue that they should be able to seize the assets of Chevron Canada to pay for the pollution of its U.S. parent. The Supreme Court of Canada found in 2015 that Canadian courts do have jurisdiction in the matter, but that decision stopped short of determining whether Chevron Canada is an asset of Chevron Corp.

The companys lawyers argue that Ontario has no jurisdiction to enforce the Ecuador court decision. The U.S. parent company and the claim itself, they say, have no connection to Ontario.

Chevron maintains that its Canadian subsidiary is a separate company, even though 100 per cent of Chevron Canadas shares are owned by Chevron Corp through its wholly owned subsidiaries.

The stakes are extremely high for both sides. A decision for the plaintiffs could reshape Indigenous rights around the globe. In Canada, the case against Chevron is receiving support from the Assembly of First Nations (AFN) and several prominent environmental groups.

AFN National Chief Perry Bellegarde, and his predecessor Phil Fontaine, were both in court Wednesday (April 18) to show support.

Investor rights should not supersede Indigenous rights, Bellegarde said during a break in proceedings outside the court. The corporate veil shouldnt be something that anyone hides behind when lands and waters and health are affected.

Fontaine visited several of the affected areas with Canadian Grand Chief Ed John last September. What I witnessed was devastating, and shocking, says Fontaine. Clearly Chevron has caused significant harm to the environment and to the health of the Indigenous peoples in this area and must be held accountable.

Those transgressions, according to the Ecuador judgment, includes, the dumping of cancer-causing produced water by the company into streams and rivers the abandoning of some 900 unlined wastewater pits carved out of the floor of the Amazon jungle frequent oil spills poorly maintained flares to burn natural gas and the destruction of documents establishing a Chevron policy that only major environmental events be reported to Ecuadorean government authorities.

During two days of often tense arguments, Chervon lawyers faced a series of tough questions from the three-judge panel.

Chevron Canada lawyer Benjamin Zarnett put forward the argument that corporate separateness, what he called a bedrock principle of Canadian corporate law, states that a corporation has the same legal rights as a natural person and one of those rights is that the debts of one person cannot be visited onto another.

The key legal doctrines being relied on by the plaintiffs lawyers include the Execution Act, which basically states money in a judgment can be seized from any interests of the defendant.

Lawyers for the Ecuadorians argued that Chevron Corps 1,500 subsidiaries and holding companies, including Chevron Canada, are essentially operating as a single company.

It is simply unfair for Indigenous peoples to win a judgment and not be able to collect because of corporate structuring related to subsidiaries, adds Steven Donziger, the lead lawyer who took on the original case 25 years ago.

This is a simple case involving the collection of a debt, Dozinger said by phone in a interview with NOW last week. There is no need to change corporate law if the court does not want to. Chevron owes the money: Chevron Canada is an asset of Chevron: thus the Ecuadorians have a right to seize Chevron Canada to collect on their judgment.

Speaking at the conclusion of last weeks hearing, Rafael Pandam, president of the Amazonian Indigenous Parliament of Ecuador, charged Chevron with lying to Indigenous communities. He said Indigenous communities will continue to fight this case here in Canada to seek justice. On Monday (April 24), meanwhile, a Manhattan court issued an extraordinary global injunction, to bar the collection of the Ecuadorean judgment.