The Unity Festival for LGBTQ police officers is a bad idea

Toronto's Bryn Hendricks wants an alternative to the Pride Parade, but no one else seems to care 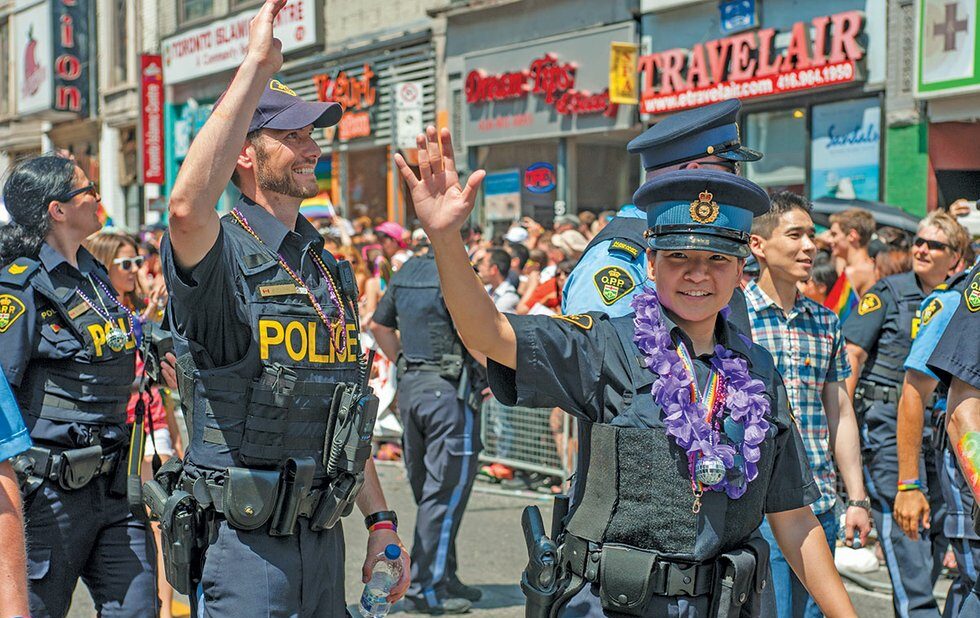 Uniformed cops won’t be participating in Pride festivities this month, and not everyone’s happy about it. Toronto resident Bryn Hendricks has been spearheading a pro-police effort, collecting signatures for a petition and even taking his concerns to the Human Rights Tribunal of Ontario (his complaint against Pride Toronto and Black Lives Matter alleging discrimination was dismissed). Now, he’s launched an event specifically for LGBTQ officers in uniform.

The First Responders Unity Festival is scheduled for June 25, the same day as the Pride parade, although its location is still unconfirmed. According to its website, the event is based on the premise that a person’s career is essential to his or her sense of identity and that cops would feel discriminated against if not in uniform.

“We are excited to ensure that LGBTQ2+ first responders and civil servants, their allies, families and friends as well as the public broadly are able to celebrate the incredible contributions each and every one of them make,” says the festival website.

Hendricks has been on a mission to fight for police rights ever since it was declared earlier this year that Toronto cops would no longer be attending Pride in uniform. Of course, they are still welcome to attend the parade and other Pride events as civilians. Toronto Police Services also held their annual Chief’s Pride Reception, which celebrates LGBTQ officers, on June 6.

Last summer, Black Lives Matter activists halted the parade until their list of demands, which included the removal of police floats in Pride marches and parades, was signed by former Pride executive director Mathieu Chantelois. Although some complained about how the 30-minute interruption left them “to stand in the blazing heat,” others viewed the act as a return to Pride’s original goals of resistance and protest.

The demand to ban police at Pride has been a victory and a relief for many members of the LGBTQ community. After all, police have a fraught history with Toronto’s most marginalized communities – the bathhouse raids, attacks on trans and sex-working groups, and excessive number of police checks of racialized individuals are just some examples.

For queer people of colour, who have been disproportionately brutalized by police, the ban is even more meaningful. Vulnerable communities often feel triggered and uncomfortable being around cops in uniform. Pride is supposed to be a safe space for all.

So the creation of the First Responders Unity Festival, which shouldn’t be confused with the existing UNITY Festival, is not only as silly as it sounds but a slap in the face to queer and racialized people, whose real concerns of safety and inclusivity don’t matter to people like Hendricks. A celebration of cops on the same day as Pride undermines the work of queer and racialized activists. In short, it’s offensive.

However, a quick call to the organizations that represent first responds reveals the Unity Festival isn’t as transparent as it should be. The Toronto Professional Firefighters Association, which represents over 3,000 people employed by Toronto Fire Services, doesn’t support the festival in an official capacity. Frank Ramagnano, president of the association, says he was emailed by Hendricks several times but is wary of his motives.

“I’ve tried to tell Mr. Hendricks that if the police are open to it and going to be there, then certainly we could consider it,” Ramagnano says. “But we were reluctant that he was going to use it to garner other support.

“My guess is that he’s spoken to some firefighters who are supporting it, and that’s it.”

Ramagnano says this month, first responders will have their own Pride party, a ticketed event attended by firefighters, cops, EMS and paramedics.

The Toronto Transit Commission, which was added to the website late last week, also denies supporting the festival.

“The TTC is not a sponsor or an official participant,” says Stuart Green, a TTC spokesperson. “TTC staff are, however, free to attend any event they choose – uniform or not – including this festival.”

Then, there’s Mayor Tory’s office, which hasn’t had any direct communication with festival organizers. He said that if an invitation to attend the festival was extended, he would consider it “because he is supportive of all emergency services.”

The mayor is, however, committed to walking in the Pride parade as he has in past years, even if Toronto police won’t be represented in uniform.

“Pride has his absolute and unequivocal support,” said a statement from his office.

The launch of a festival that specifically celebrates cops seems poorly timed considering disturbing dashcam footage that was released last week revealing two police offers openly mocking a woman with Down syndrome during a traffic stop. The officers have reportedly been reprimanded and Toronto police apologized to the family, but the incident does make you question how frequently this happens and isn’t caught.

This isn’t the first time Toronto police officers have demonstrated the need for sensitivity training either. Earlier this year, a cop stated, “He’s going to spit in your face and you’re going to get AIDS,” while apprehending a man near Ryerson University. After the controversial arrest, which was recorded by a bystander, was made public, Toronto police tweeted a series of apologies noting they would hire an HIV/AIDS expert to educate their officers. Yes, a police officer in 2017 actually believed that HIV/AIDS could be transmitted through spit, and yet the First Responders Unity Festival wants to celebrate this group and its contributions to the LGBTQ community?

Not to mention, the Toronto police refuse to abolish carding, which has been proven to be linked to racial discrimination. They seem to be ignoring our Sanctuary City policy, which protects undocumented immigrants. African-Canadian men continue to be arrested by cops at an alarming rate. Cops and our correctional system still doesn’t respect trans and gender-non-conforming folks. The Toronto police union urged city councilors to end funding for Pride because of their exclusion.

NOW made repeated attempts to reach Unity Festival organizers throughout the past week. Hendricks at first agreed to an interview, but then asked to reschedule because he was reportedly meeting with a provincial party leader. Later, Hendricks stalled again, claiming to be too busy working on “big announcements,” which never sent out to the media or publicized on the festival’s website or social media accounts. We reached out to Hendricks one last time today and he has not responded at all.

Could it be that the First Responders Unity Festival, which according to its website, still doesn’t have a location with less than two weeks to go, might never materialize?

If queer police members want to attend the First Responders Unity Festival in uniform, that’s their choice. But Toronto police won’t build allyship with Toronto’s queer and racilized communities by throwing their support behind the event.