NOW MagazineNewsFoodora union drive a battle against the gig economy

Foodora union drive a battle against the gig economy

For the labour movement, the stakes are high in a fight against a burgeoning gig economy that’s seeing app-based delivery services creating another underclass of precarious workers 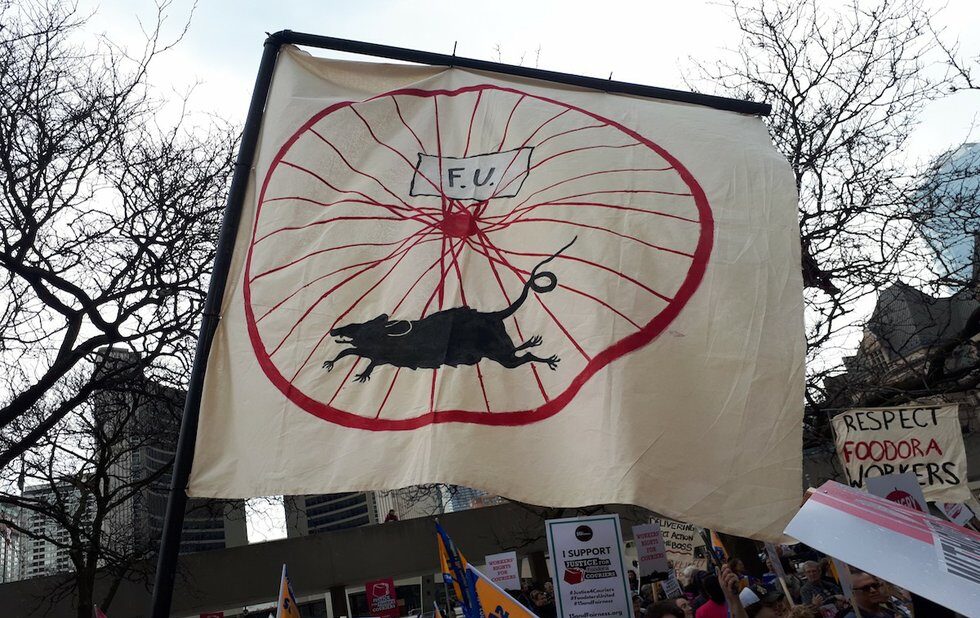 “Foodora provides the best dishes from top restaurants within 30 minutes!” proclaims the app-based food delivery company in a Facebook ad.

But according to couriers for the Berlin-based global food-delivery giant, that promise comes at a price to workers. And now they’re unionizing after complaints about lack of guaranteed shifts, inadequate compensation for workplace injuries and frozen wages, among other issues. Workers say their issues have gone unanswered by management.

“We basically started to notice that we had no power,” says Alexander Kurth, a Foodora worker and organizer with Foodsters United, which has joined forces with the Canadian Union of Postal Workers (CUPW) to help win union certification.

With Foodora fighting certification, Foodsters United has embarked on awareness raising campaign on social media and actions in the streets. The campaign is shaping up to be a long one. For the labour movement, the stakes are even higher in a battle against a burgeoning gig economy that’s seeing more app-based delivery services flourish while creating another underclass of precarious workers in the process.

CUPW president Mike Palecek says Foodora’s app-based employment model, and others like it, are “dragging workers back to the 19th century. It’s not innovation, it’s exploitation.”

Restaurants pay Foodora 30 per cent of every order, couriers make $4.50 per delivery and $1 per kilometre to drop it off. Those rates have not increased in almost five years, according to workers. Couriers must pay out of pocket for bike and car maintenance, gas, insurance and traffic tickets.

The Foodora app, meanwhile, determines shifts based on a courier’s stats for the previous two weeks, measuring a combination of hours worked, and whether you’ve showed up late (or not at all) for deliveries.

But workers say the app doesn’t take into account variables that are important to couriers such as traffic, delays caused by construction and weather conditions, which can lead to holdups in delivery and assignments.

Kurth describes what it takes to land a shift. Starting Wednesday mornings at 10 am, shifts are made available to the top performers first, which leads to workers sitting on their app trying to book as many shifts as they can during the first minutes that they’re released. Shifts for those not ranked among the top performers are released an hour later.

“By the time that one hour has past and the rest of the shifts are made available it’s the crumbs,” says Kurth, who adds that it’s not uncommon for there to be only a handful of shifts left downtown after top performers have scooped up their shifts.

According to a statement issued by Foodora, earnings for its workers across the country averaged $21 per hour in April. Foodora categorizes couriers as independent contractors, making them ineligible for Employment Insurance and other benefits such as paid sick days or family leave.

Foodora pays into the Workplace Safety and Insurance Board. But Thomas McKechnie, who works for more than one delivery service to make ends meet, says, “Having to deal with the WSIB when I was injured and couldn’t work was a nightmare.”

Couriers say they frequently work when sick or injured to make ends meet.

“It’s a matter of the rights available to couriers under the labour code,” says Spires. “If companies like Foodora, or Uber Eats, or Amazon Flex are left to dictate the terms of work, unchallenged, then we know that all delivery workers suffer.”

Kurth says that once 40 per cent of Foodora couriers have signed a union card Foodsters United will file them with the labour board.

Ontario Federation of Labour president Chris Buckley suggests this is a fight that may go all the way to the premier’s office given the Ford government’s rollback of hard-fought labour reforms and protections introduced by the previous Liberal government. Buckley says the OFL has couriers’ backs. “If we need to have a general strike in Ontario, that’s exactly what the labour movement will do.”

Foodora workers in their own words 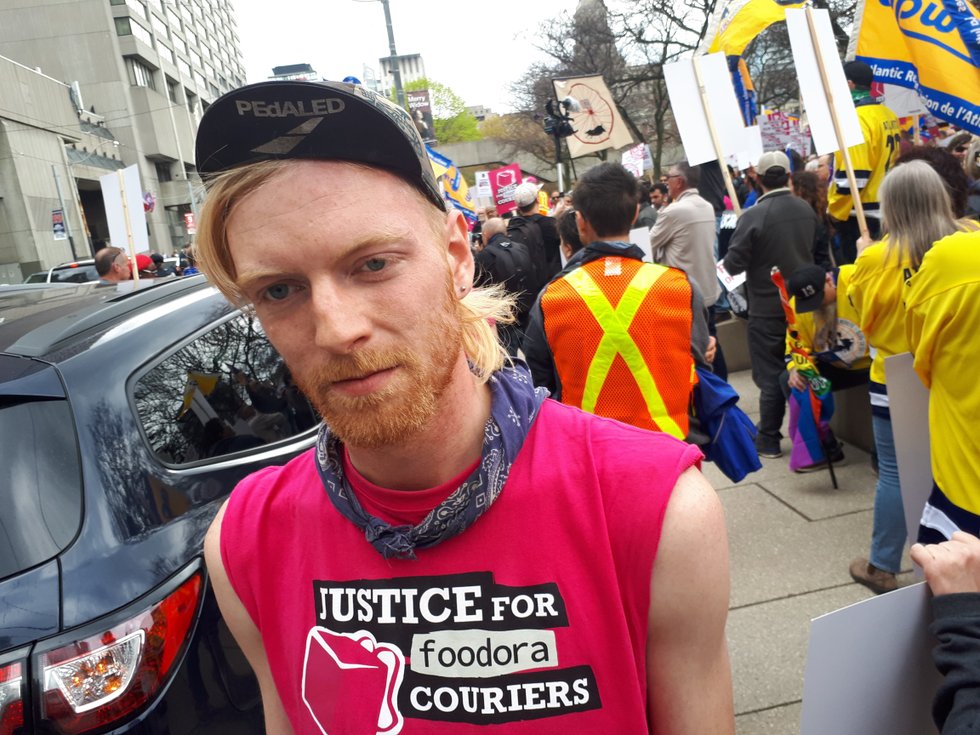 “This is a job that allows me to do something that I’m good at – which is riding my bike – and be outdoors and active. It’s also a good way to fill in gaps as I work as an artist and an organizer (with Foodsters United) as well. We need a serious re-evaluation of the labour code based on the actual reality of people who are living and working out on the streets. But the most important thing that we need to do is bring people together so they can advocate for themselves, because no one is going to choose these circumstances if they don’t have to. What we know is that the formula right now isn’t working.” 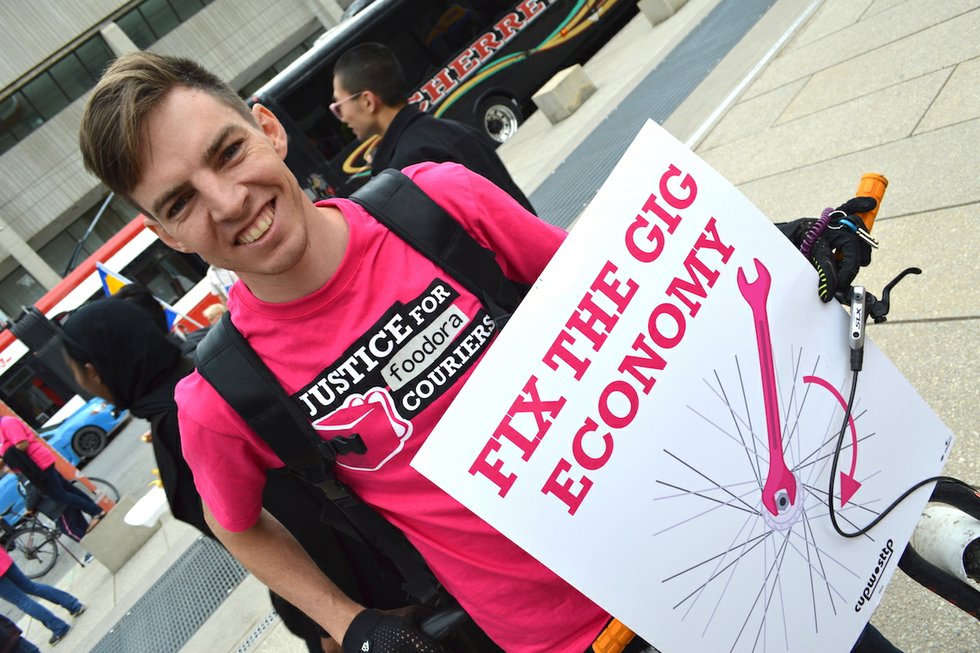 “I do a number of cycling jobs. I work in the financial district. I’ve been doing this job for about three years. It’s pretty liberating. I enjoy it, but conditions have gone down in the last two years. We’re biking farther and harder for less pay. Tipping culture is not what it was even a few years ago. And the treatment we receive from Foodora management is very poor. We’re looking to form a union in order to be able to negotiate changes, like hopefully a guaranteed minimum, better systems to set up hours, also insurance and coverage and benefits for couriers who are doing very dangerous work. So far, Foodora is not covering any of these. When you get injured and you’re forced to take time off you don’t get anything other than a little bit of WSIB.” 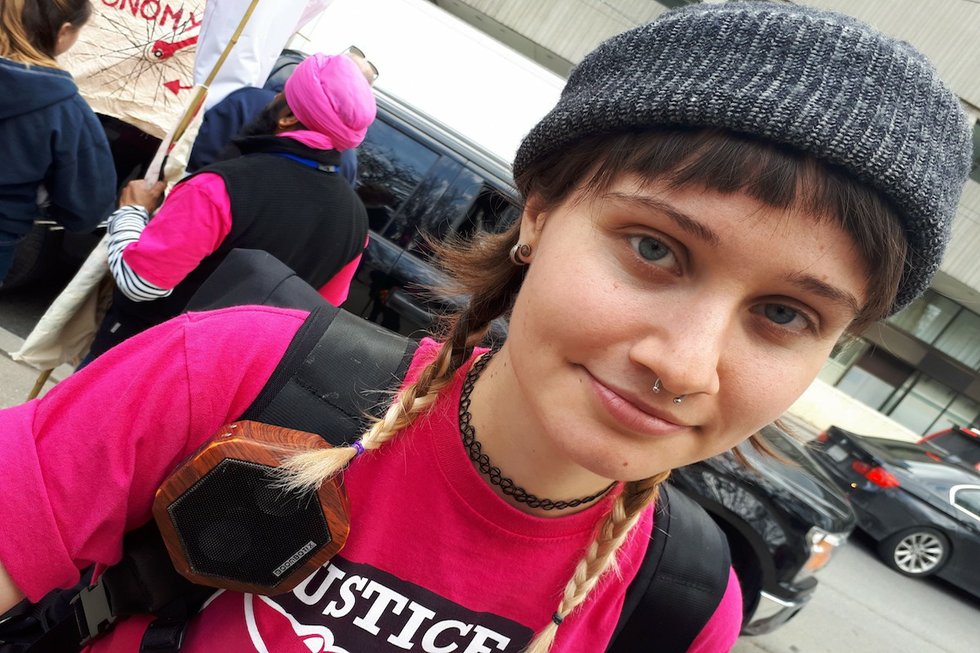 “I went to school for photography. I’m doing this until I figure out what my plans really are. I work for Uber Eats and Foodora so I can make enough money to pay rent and the bills. It’s really hard to tell what you’re going to make each day and what you’re going to end up with at the end of the month. The costs of things just keep going up and our pay rates stay the same. I love this job, and I want to fix it for myself and for the people who are going to be hired after me.”