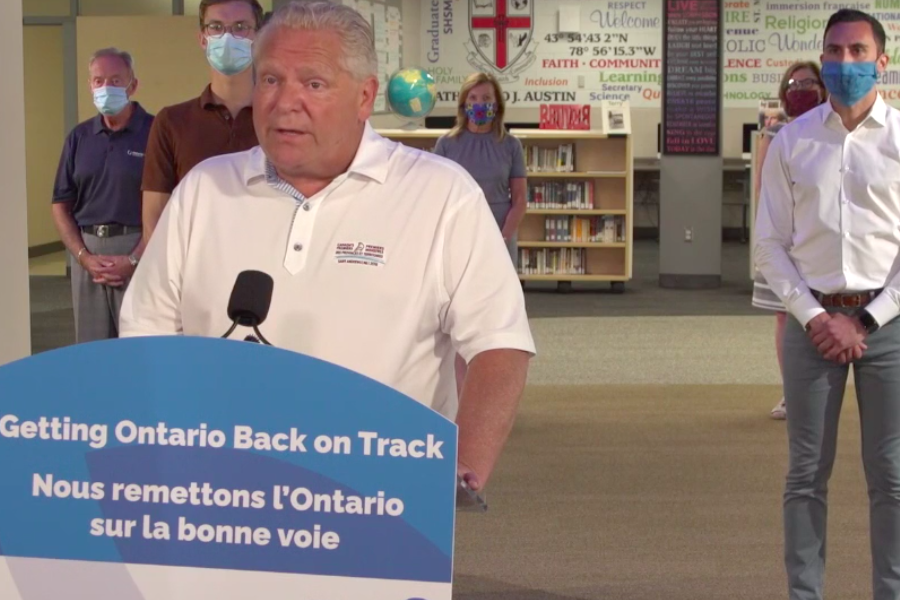 The COVID summer is almost over for kids. It’ll be back to school in September. Premier Doug Ford made the announcement Thursday afternoon, using a school in Whitby as the backdrop to release details of his government’s highly-anticipated plan.

There will be five hours a day, five days a week of classroom instruction. It won’t be exactly like pre-COVID times. Ford acknowledged, albeit indirectly, that safety measures being prescribed are not fool-proof. “Our classrooms will be as safe as we can make them,” Ford said.

But, in the end, he said, “When it comes down to it, our children belong in schools.”

It’s a sentiment that’s hard to disagree with. But some polls released ahead of the government’s announcement suggest more parents are concerned than not about sending their kids back to school full time.

Unions representing teachers and staff say it will take 10 times the infusion of cash the Ford government is promising for the measures needed to ensure a safe return in September.

The province is pledging $309 million to hire 500 public health nurses to screen students for the virus. To keep schools clean, more than 1,000 new custodians will be hired. Masks will be mandatory for grades 4 to 12. Secondary school students will be placed in smaller groups to reduce the risk of the virus. Education minister Stephen Lecce said that, if required, the province would “add another layer” to ensure safety.

The government was a little less clear on how it will be able to maintain physical distancing requirements. But Ford said that parents who want to can opt for remote learning for their children, which has been a big part of the Ford government’s education agenda even before the pandemic.

Some say the pandemic has provided the opportunity for Ford to push his e-learning plan through the backdoor. Lecce made clear that teachers who decide not to return to the classroom will be expected to teach online.

Lecce described the strategy laid out by the government to go back in September as “pulling out all the stops.”

But it’s success will rely as much on parents and students as teachers.

Parents will have to monitor their children and not send them to school if they’re sick, and must enforce hand washing and physical distancing protocols. Lecce called it a “social contract.”

Provincial medical officer of health Barbara Yaffe acknowledged that kind of vigilance will pose a challenge.

“There will be a lot of learning as we go. We are hoping that parents take this very seriously. We don’t want to have major issues in schools.”

Ford kept coming back to “the advice of the medical experts” during his press conference. And they’ve been warning the government about the mental health fallout the pandemic is having on children.

Ford cited the Sick Kids’ report released in June and updated this week. It posits that the mental health risks posed by the virus are higher for children than the virus itself.

We know a lot more now about COVID-19 than we did when Ontario became the first province to close schools back in March. But the decision to go back to school is as much about economics. Lecce alluded to the need to “get parents back to work” – the province will be opening daycare centres as well – as Stage 3 reopening of the economy takes effect.

At times during Thursday’s press conference, it felt like a campaign stop.

Ford has been on a mini-tour of the province in recent days, visiting his MPPs in friendly ridings and spreading the word about the good works his government has been doing during the pandemic. The message has been about “Getting Ontario Back On Track.”

But his back-to-school plan is risking another fight with teachers’ unions.

The Elementary Teachers’ Federation of Ontario, the Ontario English Catholic Teachers’ Association, the Ontario Secondary School Teachers’ Federation and Association des enseignantes et des enseignants franco-ontariens issued a statement shortly after the Ford government unveiled its plans. The government is “jeopardizing the safety of all Ontarians” with its “underfunded return to school plan,” the statement says.

OSSTF/FEESO President Harvey Bischof had the strongest words. He called the Ford government’s plan “an insult” and “half-baked.”