NOW MagazineNewsThe secret about free trade is out of the bag

The secret about free trade is out of the bag 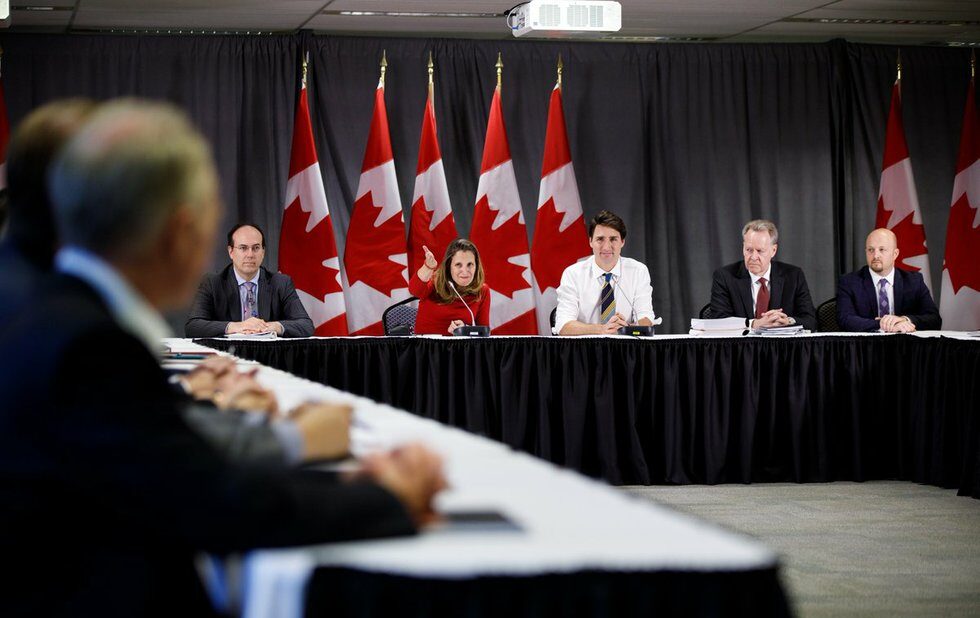 When fast history repeats itself – as with the recent high-pressure finale to U.S. President Donald Trump’s demand that Canada sign onto a U.S.-Mexico trade deal (USMCA), which was itself a repeat of rushed do-or-die threats to sign onto Free Trade Agreements in the late 80s and mid-90s – there’s a risk that swallowing too fast will produce a puke-like reflex.

A bad taste may linger among the Canadian public, but so far, astute news management by the Canadian government has prevented any controversy from welling up or spilling over.

In the age of Trump, government news managers don’t have to be all that clever to get some messages out and keep other ones in. Let Trump dominate the Twittersphere and suck up all the oxygen in the room with small issues and starve the big issues.

What easier way is there to forget that when the project of using trade deals to create prosperity took control of the political agenda during the 1980s, Toronto and Canada had lots of factories and very few food banks. Now we have lots of food banks and very few factories.

We can now set a higher minimum wage for the factory jobs that no longer exist and pass laws without being sued for financial losses by U.S. corporations – both of which were rights we enjoyed before we got into the trade game.

Please forgive the gurgling sounds from my stomach and throat, but I need to regurgitate some undigested truths.

Ironically, Trump’s hissy fits over NAFTA before and during his presidency were exactly what the original U.S.-Canada Free Trade Agreement was designed to prevent: any sense in the population that there is room left for protest, agency or controversy.

The Business Council of Canada, whose members included the CEOs of the country’s leading companies, first promoted a Canada-U.S. free trade deal as a way of locking this sense of inevitability into the Canadian mindset. It kicked off the revolution of falling expectations that has greased the skids for a generation of austerity and deregulation on matters that governments once typically governed.

The original Canada-U.S. free trade deal of the late-1980s did little to reduce tariffs, which were already too low to be judged meaningful barriers to trade. As this trade-deal model spread during the mid-1990s to envelop Mexico in NAFTA and almost all other major countries in the World Trade Organization (WTO), the agenda became clear. All these so-called trade deals deregulated global corporations from bothersome social and environmental laws while subjecting workers to full-frontal competition from low-wage countries.

According to a major UN report of 2013, 80 per cent of world trade is managed as trade within global corporations. What company the trader belongs to is much more important than what country the trader comes from.

The madcap Trump let that the cat out of the inevitability bag by declaring that at least one of these deals, NAFTA, was terrible and should be torn up.

Oh, so countries and electorates do have some say over how the inevitable is expressed, some might argue, and might have the power to undo the limits on individual government’s abilities to protect jobs or living or environmental standards. What a difference from what ostensibly progressive presidents Clinton and Obama insisted on.

But support for political agency was not Canada’s position going into this latest round. Canada tugged at the tiger’s tail and insisted to the last on holding onto Chapter 19 of NAFTA, which confines disputes over trade to expensive, long-term arbitration hearings.

Why would Canada need this assurance from USMCA when the WTO already has legal rights to forbid abrupt and unilateral protectionist moves by individual countries? Oh, that’s just a WTO commitment on paper, not like the paper commitment from USMCA.

What was done to the Canadian dairy industry remains a sore spot, and Canadian taxpayers will, in due course, deliver subsidies to dairy farmers hurt by compromises that made a face-saving deal for Trump possible.

Those who have not been taught recent history in school can be forgiven for not knowing that almost all food and agriculture trade was excluded from international trade agreements in the prosperous period from 1946 until about 1992. That’s because agriculture and food were too central to a government’s sovereignty and a peoples’ security to ever be put in harm’s way by trade deals. That was a near-universal world consensus.

It really matters not a whit if infringements on this principle are relatively modest, as is the case with Canada’s dairy farmers. The point is that a critical principle designed to protect food security, food safety and food sovereignty has been breached at the behest of a country with notoriously lax regulation of food safety and minimal protection from genetically engineered hormones in dairy management.

No one argues that U.S. dairy will expand into Canadian or other markets by competitive merit because it is widely known that approximately 73 per cent of U.S. dairy farmers’ income comes from government subsidies. Those are the farmers who are keen to compete with Canadian milk producers on a (supposedly) even playing field.

When it comes to milk, Canada’s supply management system is dealing with a product that is both perishable and vulnerable. It must be produced in a country with many challenges, ranging from prolonged heat waves in the summer, prolonged cold spells in the winter and plentiful sources of water easily polluted by soils used as dumping grounds for large cow herds.

To balance out this unpredictability, earlier trade deals allowed farmers the security they need to plan for the number of animals in their care, without facing huge waste and losses from surpluses that exceed consumer demand. And now we want to open a wedge in the delicate negotiation that produced that deal, which has protected family farms in dairy and avoided major health scares common in other countries?

During the 1980s campaign against free trade, critically minded unions, citizen organizations, academics and others, including the Liberal Party and NDP, developed high-quality and high-profile arguments challenging myths of free traders.

Such was not the case this round. Though the skills of government news managers should not be underestimated (least of all the news experience of Canada’s senior negotiator, former journalist Chrystia Freeland), it must be said that the Liberals scored by shooting at an empty net.