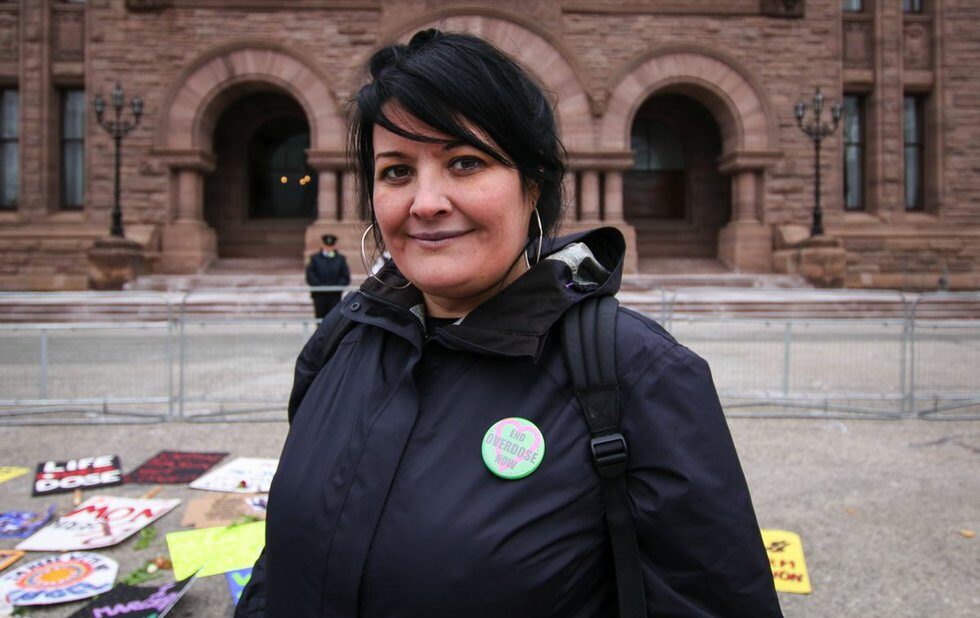 Zoe Dodd sits on her couch surrounded by a mountain of pillows and blankets. Tears well up in her eyes.

“I always told him how much I appreciated him. I look through our text messages a lot.”

Dodd is talking about her close friend Raffi Balian. They worked together at South Riverdale Community Health Centre (SRCHC), where Dodd is a hepatitis C support program coordinator. She describes him as a mentor.

Balian died in a small hotel in Vancouver’s Downtown Eastside in February. In Vancouver to speak at a conference on the urgent need to open more supervised injection sites across Canada, he overdosed after years of being an injection drug user.

His death was a blow to those in the harm reduction community across the country, many of whom had worked with him.

As Canada faces an opioid crisis that has led to a record number of overdose fatalities, Balian’s death has also raised questions about the effect the emergency is having on front-line harm reduction workers dealing with the compounding grief.

Dodd’s year began with six of her clients dying in January. The numbers keep rising from there. A few months ago, one of her co-workers committed suicide.

There’s no real-time data on the number of overdose deaths in Toronto or Ontario because historically no mechanism was in place for keeping track. Data for 2014 says 258 deaths in Toronto were caused by substance-related overdoses. Preliminary numbers for 2015 show 253 deaths.

Last month, Toronto Public Health released its Toronto Overdose Action Plan, which details 10 steps the city will be taking to address the crisis, including keeping real-time data on overdose deaths, as well as issuing public health messages and alerts about contaminated drugs.

The 50-page document also recognizes that more funds need to be allocated to harm reduction service providers and calls on the government of Ontario to follow in the steps of BC, which is working to address the psychological impact of working on the front lines of the overdose epidemic.

But it’s unclear who will pay for this needed increase in services for front-line workers. TPH’s action plan appeals to the provincial government for more money. Councillor Joe Cressy, chair of the Toronto Drug Strategy, says the city lacks the resources to cover the mental health needs of front-line harm reduction workers.

In the 2017 budget, council voted to add four permanent training and research positions at a cost of nearly $300,000 (25 per cent of which is to be paid for by the city and the rest by the province).

Those employed at The Works, where many of the city’s harm reduction supplies are distributed through non-profit agencies, are covered by the city’s benefits program.

But the rest should be the responsibility of the province, says Cressy.

“People are overworked. When you’re doing this work day in, day out on a front-line basis, you need to have proper support.”

TPH’s action plan states that it will increase funding to the Toronto Urban Health Fund (TUHF), which makes grants to various harm reduction and HIV prevention programs. But that won’t include funding for workers’ access to mental health services, says Herbert Co, a fund supervisor. 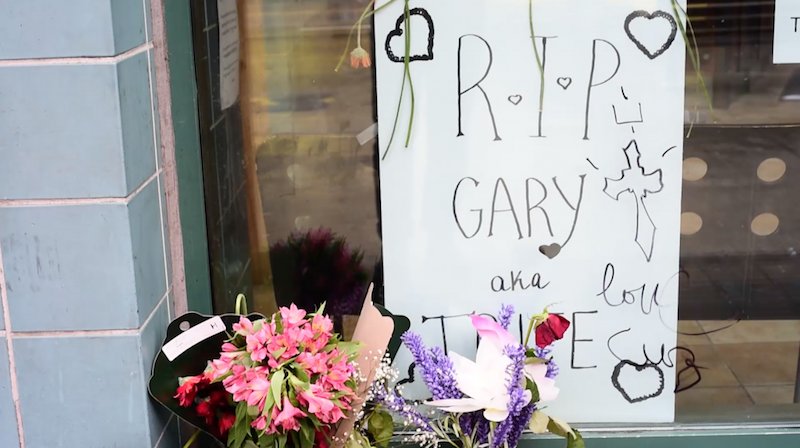 Outside the Queen West Community Health Centre (QWCHC) near Bathurst and Queen, a makeshift memorial marks the place where a man identified by workers as Gary died a couple of weeks ago. People expect it was another overdose.

The busy centre is home to one of downtown’s harm reduction hubs. People stop to pay their respects to Gary before going in.

Originally from Newfoundland, Kier Martin is QWCHC’s harm reduction coordinator, one of an estimated 20 injection drug use educators in Ontario.

His current program is funded through the Ministry of Health’s AIDS Bureau. In order to get TUHF funding, he says, groups need to demonstrate that they’re doing something new – even if their program has a successful track record. But “you can only reinvent yourself so many times in a year,” Martin says.

As far as funding for front-line workers’ mental health, “it is and it isn’t” available.

Providing grief counselling for staff, for example, would mean taking essential harm reduction services – as well as things like soap, toothbrushes and clothes – from his clients.

Being front-line workers means “we don’t get to grieve and mourn the loss of members of our community along with everyone else, because we have to stay in work mode,” Martin says.

David Jensen, media relations coordinator for the Ministry of Health, writes in an email to NOW that the mental health and well-being of front-line workers has been a “frequent” topic at networking meetings funded by the ministry.

But ultimately, according to Jensen, that responsibility falls on the organizations employing them.

An extra difficulty for those working on the front lines is the fact that many are on short-term contracts with no benefits.

As a founding member of the Frontline Worker Support Group, Dodd helps organize workshops and meetings for workers to share their stories and their grief. The group recently raised more than $2,000 to help pay for acupuncture for front-line workers unable to afford the treatment.

“We’re working in an environment where we’re so understaffed, there’s no relief,” she says. “That’s so fucked up.”

That sentiment is echoed by Carol Danis, harm reduction coordinator at Sistering, a drop-in women’s shelter in Bloorcourt Village that became a 24/7 operation at the onset of the overdose epidemic in 2015. Since then, Danis has had at least 30 people come through her office every day. One of her clients, a woman she worked with for two years, died from an opioid overdose last month.

“It just shattered me,” she says. But she had little time to process that loss – she had to organize the memorial.

The number of overdoses by people who access the shelter has been increasing, Danis says. It’s gotten to the point where, even though workers frantically distribute naloxone kits, set up doctor’s and psychiatrist’s appointments, do HIV tests and run education sessions, clients keep coming in with new overdose stories.

Danis says the best way to help herself has been to “fight back with resilience.” For her that means telling people they’re loved, sharing stories and “recognizing the beauty of [the people] who died and their right as human beings to stay alive.”

Front-line work is a labour of love, frustration, anger and sadness that people don’t want to leave. Following Balian’s death, Dodd left the city for a few weeks, flying to her hometown near Whitehorse to relax and decompress.

Her favourite thing to do was drive around in her mom’s big old truck. “I never get to do stuff like that,” she says, adding that it gave her a sense of power.

She pulls out a picture from her trip. She’s on a dogsled trailing behind four strong-looking huskies. Against a boreal background, Dodd is wrapped head to toe in winter gear, her hood drawn, bright red gloves gripping the sled, only her eyes exposed to the elements.

Six weeks after her friend’s death, Dodd is feeling better and back at work a few days a week. The pottery classes she loves are starting up again, the weather is improving, and she’s waiting to hear if her application to York University has been accepted. She says she still cries for Balian, but she’s trying to be positive.