NOW MagazineNewsLetters To The EditorThe future of Toronto: NOW readers weigh in on lessons from the pandemic

We asked readers to tell us the most important issues the pandemic has highlighted and what needs to change. Here are their responses. 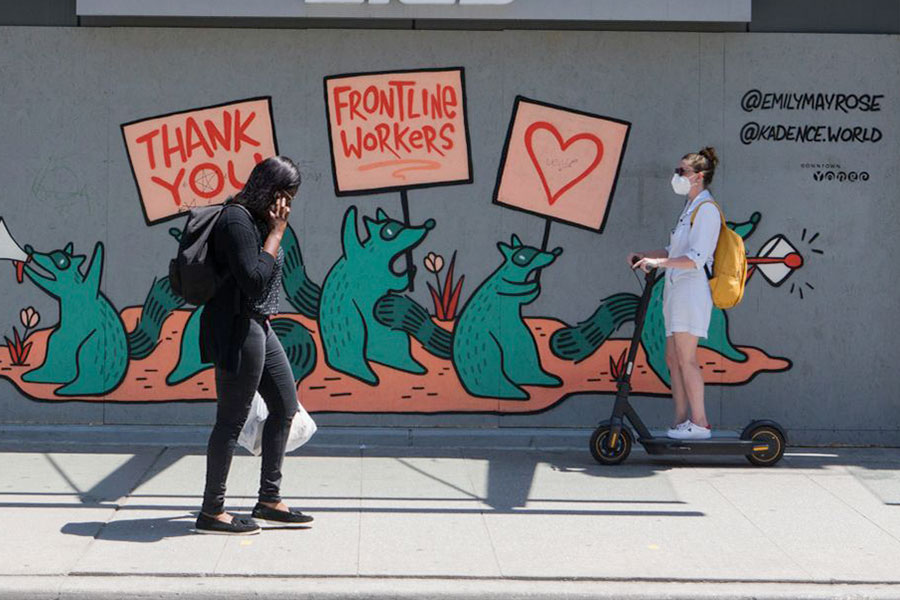 What issue has the pandemic highlighted that needs urgent attention?

The lack of reasonable housing. Crowded conditions contribute to virus spread. We have vacant properties but people are commuting distances on crowded transit lines for low- or moderate-paying jobs. Somehow we have to stop having all housing built for upper-income people only. I do not want designated buildings for people. Somehow every condo that goes up needs to have some units available for the working poor. The model of the 15-minute city makes sense.

My neighbours are already racially diverse, but I would like them to be economically diverse, too. The bubbles we live in contribute to misunderstandings within communities. Areas of Toronto that are not diverse should be. We are not complete as people when we are in a bubble. I love Toronto. I think it has the potential to grow and change. We just need to break our boxes.
Winnie McDonagh — Downtown

Long-term care should never be part of a gig economy. Workers must be paid appropriately so that there is no need to move from home to home and thus transmit infections.
Will — East York

Homelessness. In a city and country that values our social systems, we should care about the more vulnerable citizens who need help coping with the lack of affordable housing. We need more health care revolving around mental illness and drug addiction.

I realize that there will always be a divide between the wealthy and the poor, and that the middle-income earners will always bear the economic brunt. House prices need to come down so that more people can afford to own a home. I do not believe that home ownership is a god-given right, but young working people should be able to one day afford a home. That being said, rental properties need to also be more affordable. I feel incredibly proud to be Canadian and to live in a wonderful city like Toronto. On the whole, we are tolerant, accepting and kind people.
Maureen Muscott — Harbourfront

A just recovery for all. Strong financial support for the arts and small businesses and finally doing something about the homelessness crisis.
Debbie Wolgelerenter — CASA LOMA

What does a more equitable Toronto look like to you?

Spread out the wealth. Ten per cent have all the money, and they don’t care about those who do not have wealth. Universal basic income would be great for those of us who have precarious work, even when we want to have a regular income and steady hours. Because of having worked many years on contracts, employers think you will quit, and won’t give you full-time opportunities. Now people with full-time jobs are even more reluctant to quit, as there are less employment opportunities. It is not fair to have an economy that excludes people who are older, disabled, POC, too experienced or not experienced enough. We should be looking at ways to form collaborative PAID – not VOLUNTEER – work for all.
Chris Coxson — Scarborough

An understanding that diversity does not equal inclusion especially as decision-makers. A deeper understanding of historic racism, especially against Asians and Japanese Canadians.
Lynn Deutscher Kobayashi — Dufferin Grove

Better support for homeless communities and better public health in general. Many homeless people downtown are still roaming without masks and do not have access to hand washing or bathing facilities. Many have lost their income sources through selling crafts or begging. Social distancing may not be possible, which is angering residents and causing backlash against an already vulnerable community.
Justin — Downtown

All workers who have been struggling for years need to paid a living wage that reflects the true costs of living in Toronto (especially as this relates to safe and affordable housing). If a large percentage of struggling workers and young people have no way to advance themselves beyond a precarious minimum-wage existence, then this city’s ability to thrive and prosper will be crippled permanently.
WP — The Annex

What are your biggest concerns as Toronto gradually reopens from lockdown measures?

Ensuring that the most vulnerable populations in our city aren’t sacrificed in our pursuit of economic recovery.
Catherine — The Annex

Lack of sick days, worker protections in the event of infection and infrastructure is continually ignored. The TTC suffered a lot and the citizens of Toronto will pay for it – not just financially. Not to mention the disrepair of TDSB/TCDSB buildings.
Jenny — Riverdale/Danforth

That people will be reckless, especially young people, and not protect themselves from the virus. The school reopenings are worrisome. Seems like the economic restart is more important than human life should a second wave start.
Chico — North York

Too many rules and regulations. There will be way too many restrictions on events so there will be a lack of festivals, concerts, sports, gatherings, etc. So many businesses will continue to fail and the city will be lifeless. Or, even worse, we won’t open from the lockdown measures or there will be more lockdowns.
Jarrod — Bloorcourt

How have recent anti-Black racism protests changed the way you think about the role of police, if at all?

The police lack formal education, training and all too often, integrity. I have been subjected to racial profiling by police for as long as I can remember, despite never being given a speeding ticket, let alone breaking the law. The police act first, then listen (or speak). There should be a team of mental health professionals dispatched when someone calls 911 for a person in distress. Would you send a psychiatrist to put out a fire? No. So why send police to deal with someone having a psychotic episode?
Jules — Leaside

I was never a big fan of police, but the death of Regis- Korchinski-Paquet really galvanized me. The Toronto Police Service must see their budget decrease by a minimum of 10 per cent – a full one-tenth of Toronto’s operating budget goes to policing, over valuable public services like education and transit. City council didn’t even have the courage of their convictions to go as far as Wong-Tam and Matlow’s motion, which was a sop to the neoliberals on council. (Kudos to them for trying, though.)
Ilana Newman — East York

Police have a tough job and are crucial to keeping a community safe. But they either need more training to deal with social issues or they need to access other resources so they are more able to deal with social issues. The use of weapons, force, tasers, etc. must be a last resort, not the first. This means more training and education. A greater interaction at community levels should always be encouraged. Independent oversight of the police force is a must. The budget should be assessed with a greater emphasis of social integration and less on order, force, control and power.
Lynn Boucher — Wynford/Don Mills

I’ve always thought that Toronto police make no effort to connect with the residents in BIPOC communities; they just surveil them along with shooting first and asking questions later. More changes need to be made when it comes to distress calls and allowing social workers and those who are trained to respond to those types of calls.

The police budget needs to be reduced and those funds reallocated to social services that help to engage people instead of them turning to crime.
Jesica — Downsview

Police education should include philosophy, ethics and literature classes, so that police officers can develop empathy for everyone (no matter the race or creed). There needs to be a shift away from the us vs. them mentality.
Raya P. — Chinatown