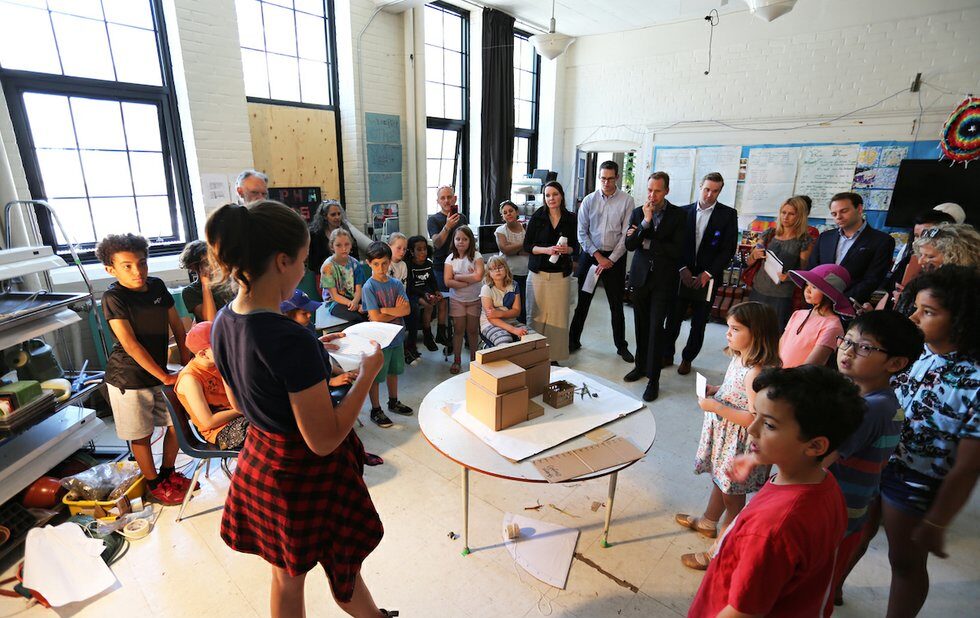 Cranes swing everywhere over the garment district as working-class houses fall to the arrival of more clubs and a hot condo market.

I moved to the neighbourhood 30 years ago so that I could walk to work at a nearby factory and drop my kid off at ALPHA Alternative School on the way. I’ve also worked at the school my master’s thesis was a study of its democratic education practices.

So when I learned that the kids at ALPHA were scheduled to make a presentation to developers from Allied Properties REIT and Great Gulf Homes, who are planning to erect a 12-storey condo next to the century-old three-storey school at King and Spadina, I wanted to be there. Can it become a win-win situation?

It was the Garment District Neighbourhood Association that notified ALPHA that proposals were pending after students returned from March break to see that some trees adjoining the school property had been cut down.

A few years earlier when another old factory nearby was torn down, students had successfully defended scrub maples that grew between the factory’s walls and its fence, arguing that they provide homes for squirrels and birds.

ALPHA parents and teachers typically support that kind of thinking. One year, the kids wanted to study bugs but they couldn’t find any bugs because there was no green space. So parents dug up the asphalt and started planting trees and shrubs so that the bugs would come.

“A month ago my son came home and was saying how there was a hawk in the playground and he was trying to get a squirrel,” says parent Sonja Wasyk, as she takes representatives from Allied, the Toronto District School Board and city officials on a tour of the schoolyard.

Wasyk explains that such sightings are not only a thrill for the kids, they are part of the learning process.

“The ALPHA curriculum takes something that’s happened or is happening and derives from that the topic of the day.” ALPHA’s parents and teachers want their school to be part of “an ecology to support things that are outside of a textbook: hands-on and tactile, to create enthusiasm for school and learning,” says Wasyk. 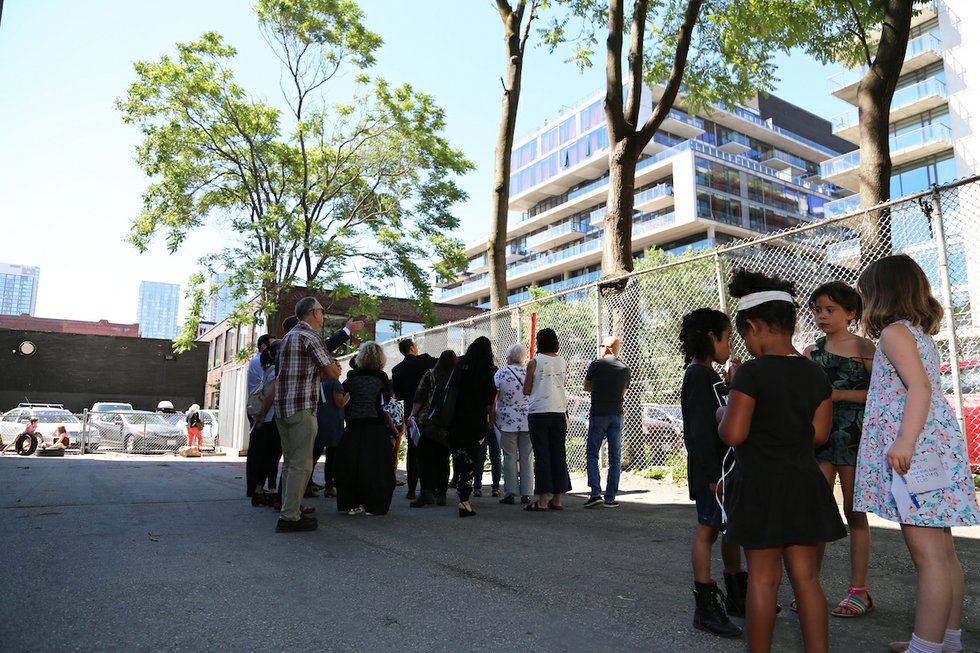 While they stroll with students, the developers discuss with them how the proposed building could support the school experience rather than saddling students with a concrete wall and service entrances.

Student Xingkong is relieved that green roofs are part of the proposal. “It would be nice if there were green roofs all over Toronto because that would stop CO2 emissions and the world would be a better place. I’ve been to China, and you have to wear a mask [to go outside] and it smells terrible. Believe me, you do not want to be stuck out there without a mask.” 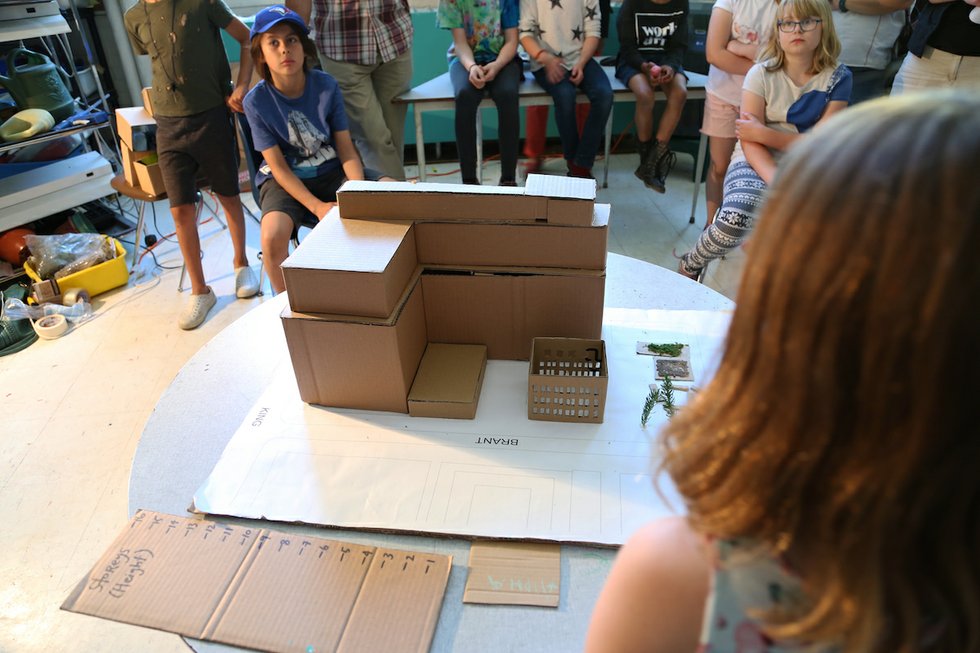 Inside, Grade 3 to 6 students use a large lamp and a scaled cardboard model of the development to demonstrate how the L-shaped building will cast dark shadows over the schoolyard.

But the students have ideas.

“I love the idea that you guys want to make your building with different things inside,” says student presenter Zion of the multi-use development. “But we just need to block out some space so we can have some room.”

Fellow student Teja proposes a solution: a taller tower facing King and lower towers attached to it closer to the school. “This will give us just enough sun between 11 and 1 every day from January to mid-March,” says Teja.

“It’s very important for us to have the sun because it’s one of the things that keeps us warm while we’re outside,” adds Sarah, as she arranges cardboard blocks to demonstrate light angles in September.

Mazin, another student, offers a different idea for letting light into the schoolyard: a bridge connection between towers.

Valerie Eggertson of the neighbourhood association leans over and whispers to me, “We need these kids at the OMB!”

Hugh Clark, vice president of development at Allied, also seems impressed. “It’s great that you guys did this. It gives you a sense of learning how architecture and design and engineering and planning all come together.”

Parent Kelsey Carriere points out common discoveries from the students’ light experiments: “We can see that at the corner of King and Brant, you can go as high as the city will let you without obstructing the sun on the schoolyard. But [on the west side], it’s important to maintain the lower levels.”

Students had attached bits of moss to their model to show a green roof there. “It could be part of our school landscape,” says Carriere.

Students also worry about the impact of the construction itself. Zion notes that she may graduate by the time construction begins but “all of our little kids in kindergarten are going to be here.”

Clark notices that the community ideas contain “a lot of common themes we’ve been working on,” including massing toward King. But some proposals were quite new, such as a green buffer to protect the playground.

Carriere closes the presentation with a friendly challenge to Allied. “Every time you build something, you have the opportunity to make this city more awesome for the generations to come. We’d like to see the developers take this opportunity to create more awesomeness. We know you guys know how to do it.” 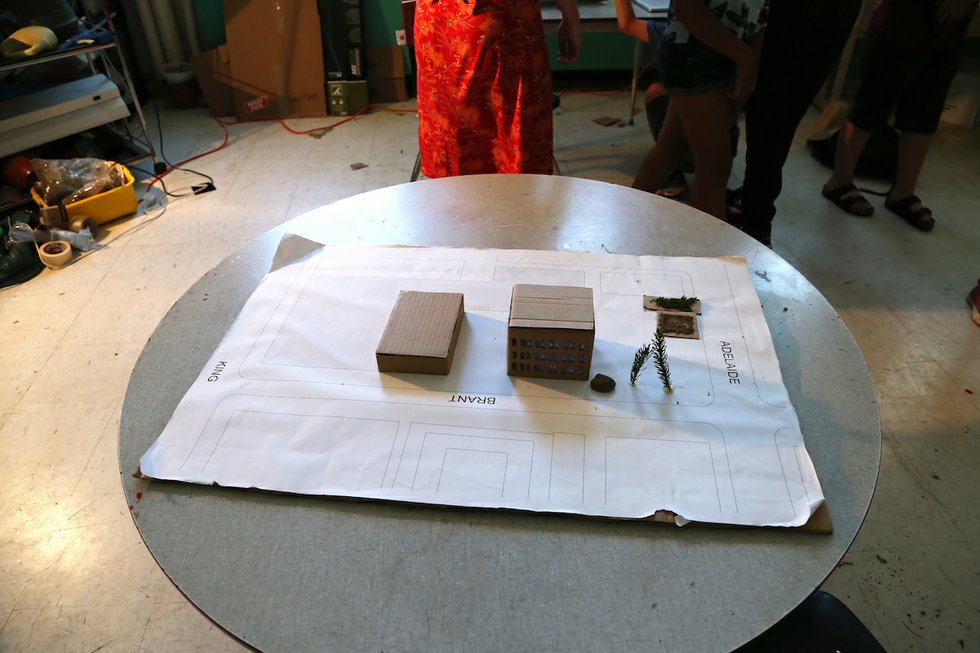