Is Giorgio Mammoliti a racist? 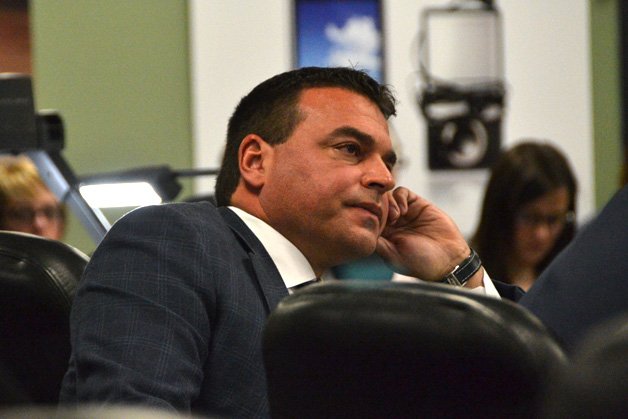 Giorgio Mammoliti’s alarmist rantings on gun violence and crime are well-known. He wants to call in the army. The Toronto councillor has built a political career on pitting homeowners in his west end ward, which includes the Jane-Finch area, against lower-income folks who occupy social housing.

But with municipal elections around the corner – and his right-wing buddy Doug Ford now in the Premier’s office – Mammoliti’s angry diatribes have reached a new low.

Council’s biggest mouth is calling for the tearing down of social housing and likening those on social assistance in his ward to “cockroaches” that need to be scattered. Last week, in a campaign-style ad released on his Facebook page, Mammoliti pledged to take a sledgehammer to social housing himself.

“Saving our community begins with knocking down social housing,” the ad reads. “You deserve better.”

In an op-ed piece penned for the Toronto Sun in July, he offers some of his police state-style solutions to the recent spike in gun violence, which are described as tough-love initiatives – including bringing back the practice of carding by police. And dares “the usual social warrior activists and professional grant getters that feed off the misery of these neighbourhoods” to call him a racist.

Alright, then. Let’s put Mammoliti’s pronouncements, past and present, up against the Ontario Human Rights Commission’s (OHRC) definition of racism, racial discrimination and systemic racism.

“Race is a social construct. This means that society forms ideas of race based on geographic, historical, political, economic, social and cultural factors, as well as physical traits, even though none of these can be used to justify racial superiority or racial prejudice.”

While claiming to be proud to have grown up in Jane-Finch, Mammoliti trades in some of the worst stereotypes surrounding the area. He defended, for example, Minister of Community Safety and Corrections Michael Tibollo’s decision to wear a bulletproof vest during a ride-along with police in the neighbourhood shortly after a double shooting. Mammoliti responded to criticism of Tibollo by going out on a ride-along of his own wearing a bulletproof vest.

I also grew up in Jane-Finch, and somehow made it out alive without ever donning kevlar or taking a police escort. Thousands of people, some very successful like Jully Black and Dwight Drummond, have made it out of the neighbourhood without becoming, as described by Minister Tibollo, “bullet-ridden people in the middle of the night.”

The dehumanization of a community of racialized people by two privileged white men acting like war reporters in a militarized zone smacks of racism.

“Racism is a broader experience and practice than racial discrimination. Racism is a belief that one group is superior to others. Racism can be openly displayed in racial jokes, slurs or hate crimes. It can also be more deeply rooted in attitudes, values and stereotypical beliefs. In some cases, people don’t even realize they have these beliefs. Instead, they are assumptions that have evolved over time and have become part of systems and institutions, and also associated with the dominant group’s power and privilege.”

The Jane-Finch area falls within the low to medium range for violent crime in the city. The majority of violence-related calls to police occur in the downtown core. Yet the downtown area only receives a fraction of the crime-related news coverage as Jane-Finch.

As the councillor for the area, Mammoliti’s fear-mongering paints people in the community he represents in a negative and inaccurate light. So if the facts don’t bear out his beliefs, where do Mammoliti’s assumptions come from?

What do you call a policing strategy targeting young Black men (some as young as children) in a community that has been making its concerns about police abuses known for years – especially if the policy has been deemed to be more harmful than useful?

I’m of course speaking of carding, which Mammoliti believes should be brought back. He wants police back in schools, too. He wants police to have all the resources they need to keep the community “safe.”

But what does the community want?

According to ACT for Youth, a five-year community-university research project focused on Jane-Finch, police often made interactions with youth worse by “interrogating people, invading their privacy and not treating community residents with dignity.”

But if he had his way, Mammoliti would institute a curfew for anyone 12 years of age and under. In the past he’s suggested that no one under 15 should be roaming the streets without adult supervision. Never mind the ridiculous idea that there’s all these babies running around the streets at 2 am in Jane-Finch.

According to the OHRC’s definition, all of this amounts to racism. Mammoliti doesn’t really seem to care.