Audio school students need to stop being so offended by everything and prepare themselves for a (very politically incorrect) music industry, head says 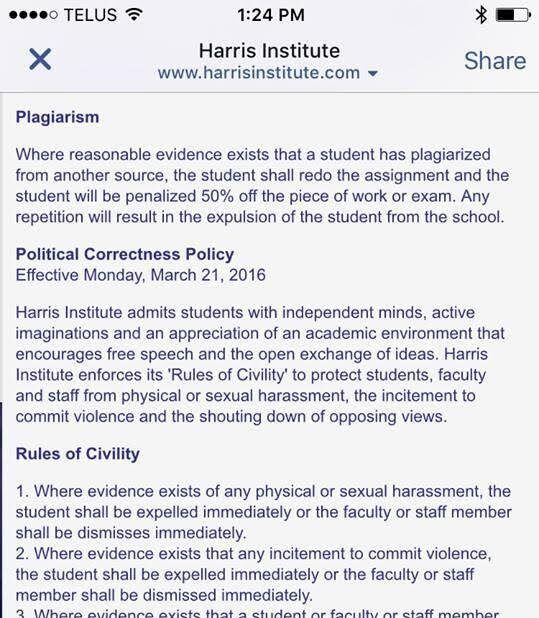 There’s been a recent surge in debates (and ensuing think-pieces) fretting about whether political correctness and trigger warnings at colleges and universities are making millennials hyper-sensitive and killing free speech. A September cover story in the Atlantic gave a big boost to that argument, although critics have pointed out that the science in the article isn’t quite as rigorous as it seems.

But the Atlantic story’s argument won over decision makers at Harris Institute, a Toronto audio school, who this week announced they will implement a new anti-political correctness policy. Students starting classes next March will be expected to sign a Rules Of Civility agreement, which bars students and teachers from obvious criminal acts like physical assault, sexual harassment, incitement of violence and lastly, “shouting down of opposing views.”

We were curious just how far the school was willing to take their extreme free speech position, so we called up Harris Institute president James Harris to get some clarification on what exactly “shouting down” means, why it’s a problem, and how much bigotry a student would have to endure before they would be allowed to raise their voice in response.

Most schools these days are going in the opposite direction, so I’m curious why Harris has decided to put in place this kind of policy?

Yes, that is true. In fact I’m not sure of any schools that have done what we’re doing. The whole political correctness area has become a major challenge for post-secondary schools across North America, and I’ve witnessed it here with increasing sensitivities to language and ideas. Although it’s always been our approach to have an environment that encourages free speech and the open exchange of ideas, I felt it was necessary to actually create a written policy and inform students before they begin that they’re entering an environment where that is the case. Part of what’s different about us is that we reflect and service the music industry, and many would say that the music industry is one of the most politically incorrect environments, and we’re obligated to properly prepare students to enter that environment.

Are you saying there have been specific situations in the past at Harris?

There have been sensitivities. For example, we have a lot of guest lecturers who come in, and they have views and ideas that some people are not comfortable with. For example, one of our guest lecturers, Martin Atkins, who is an author and punk drummer, and who was in Public Image Ltd and Nine Inch Nails. He wrote a book where even the title is politically incorrect, and the title of the book was Welcome To The Music Business, You’re Fucked. For some people, even language like that, they’re sensitive to. So what we’re doing is clarifying the nature of the environment. We’ve had courses where rap lyrics and hip-hop lyrics, etcetera – some people are sensitive to those things. This is basically clarifying that in this environment people may need to confront and debate ideas and language that they may feel uncomfortable with.

So you are saying that students were actually upset over the title of that book?

Some were, yeah. Well, not just the title. I mean his guest lecture, which was one of the best we’ve ever had, I mean he uses a lot of language. He’s a very opinionated and, some would say, abrasive individual. My view is that he represents a certain part of the attitude within the industry, and that students will need to confront individuals like him and others.

What was it that he said that people had a problem with, if it wasn’t the title of his book?

Can you give me any specifics?

But you said it wasn’t just the title of the book, but some of the other things he talked about.

I mean even the title of his book, people were sensitive to.

So you’re saying that students protested the title of his book at your school?

Students had…You know we do evaluations on all courses, all faculty, all content, and we encourage them to tell us what they think, and I’ve noticed over the last three, four, or five years that because of this issue of political correctness, a higher percentage of students are more sensitive than used to be the case. I mean, in the last few years, something like 280 guest lecturers have been disinvited at post-secondary schools across North America, because students didn’t like their ideas, etc. I mean, this is happening on a broad scale in post secondary education, and it’s my view and the view of people at Harris Institute that this is in fact one of the most valuable aspects of post-secondary education. That people should debate and discuss all issues related to everything in an open environment.

What exactly is the definition of “shouting down,” within the context of the new regulations?

Well, you know, becoming overly emotional and loud, where it’s a disturbance to other students or faculty in that environment.

So if a student calmly called a speaker racist without raising their voice, that would be ok?

No problem. Yes, that is ok.

No, within the policy there are the rules of civility to protect students from physical or sexual harassment, or the incitement to commit violence, as well as shouting down. But the thrust of it is that the environment encourages free speech and the open exchange of ideas.

Just to get some clarity, where exactly is the line on “shouting down”? Do you have to raise your voice, or are there other factors?

No, when it becomes emotional and there is shouting.

And this has been an issue at Harris?

Um, that is where we are drawing the line, in terms of conduct within the environment.

If I’m clear, the policy says that you can’t incite violence, you can’t sexually harass someone, and you can’t physically assault someone, but you can say anything you want, as long as you don’t raise your voice?

So if I had a teacher who kept calling me fag, and I got upset with them and yelled at them, I would be in the wrong?

Absolutely. In fact, that might fall under the sexual harassment part.

How would a teacher calling me fag be sexual harassment?

I think that there would be a consensus that that is a type of sexual harassment, calling someone names.

I don’t think that is actually what sexual harassment means. How about it we flip it to a teacher calling me n*****? Would I be allowed to be upset at that and shout at them? Or would I be put on probation for shouting?

Interesting. If a teacher wanted to give a lesson about the Holocaust being a good idea, do students have a right to be upset at that?

No. That would be a case where that’s open to debate. Although that kind of topic is extremely unlikely to come up in this kind of environment. There are a lot of areas where some might consider it a grey area, so this is not as black and white as one would hope. We basically wanted to clarify generally that free speech and the open exchange of ideas is the norm here. In a lot of post-secondary schools across North America, that has become a major challenge, in terms of who can discuss what under which circumstances, and who can be a guest, etc., etc.

Am I right in assuming you’re hoping this policy will get some media attention and provoke a larger debate?

I think some other post-secondary schools will be interested in what we’re doing. Because I know this is becoming an increasing challenge, right across the board. A lot of schools are now introducing trigger warnings to various teaching materials, videos, books – Anything that might be sensitive to any student. The two articles that I distributed with the press release, especially the cover story in the Atlantic, talks about a lot of challenges that schools are facing all over the place in terms of language and ideas in an academic environment. A lot of people within those academic environments are disturbed that it is undermining one of the greatest values of a post-secondary education, where people feel free to debate and discuss virtually any idea.

Within the rumour mill of the Toronto music community I have heard reports in the past about one of your teachers using the word “gay” in a derogatory way, towards students that were not performing well. Am I right in understanding that this policy is meant to protect that kind of speech?

It’s just the language issue, so that would not be a problem.