With an election looming, labour minister Monte McNaughton has been front and centre in the Ford PCs' efforts to rebrand themselves as the party of working people 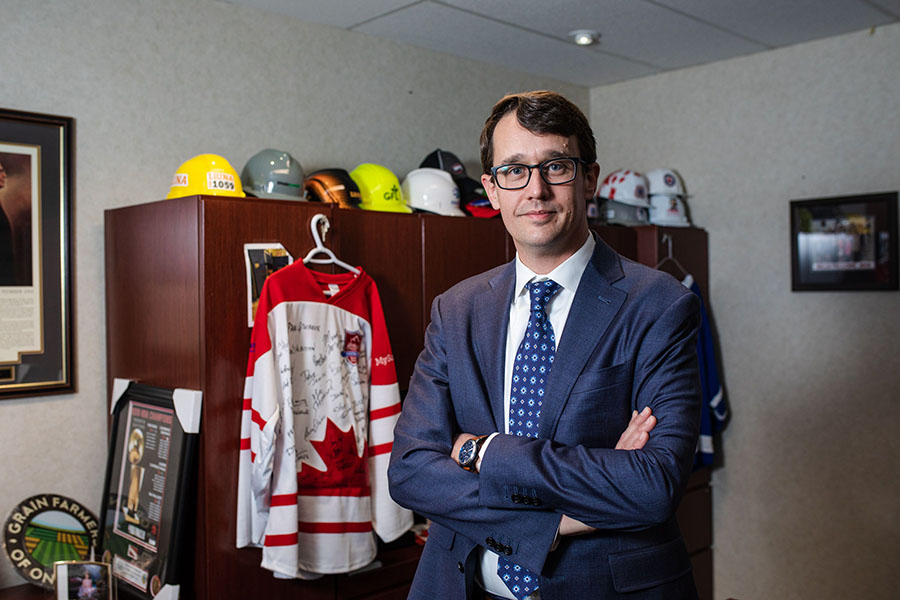 Labour, training and skills development minister Monte McNaughton has been so busy courting labour votes that he's accumulated an impressive collection of hard hats in his Queen’s Park office.

At a press conference carried via Zoom from Marben Restaurant in the NDP-friendly confines of Spadina-Fort York in downtown Toronto, Horwath talked up the NDP’s labour roots and the fact the party “has been fighting for workers for a long time.”

There was no denying the campaign-style undertones. It was a broadside at Doug Ford, whose government announced its own plans two weeks ago to raise the minimum wage to $15 starting in January. Horwath is quick to point out that the PCs put a fork in Liberal legislation to raise the minimum wage shortly after Ford took office three years ago. “That cost people dearly.”

Horwath says the NDP is proposing to phase in its increase over four years, which raises questions for those who live in cities where anything under $20 an hour right now doesn’t add up to a living wage. Horwath was asked about that.

She indicated that details still have to be hammered out with business on how best to accommodate the increase, including possibly a cut on the wholesale cost of booze for restaurants, for example. But whatever the final plan looks like for business, the focus will be on the local. “We’re not in it for the Walmarts of the world,” says Horwath.

There was a time when Horwath was reluctant to campaign on a minimum wage. In 2014, the NDP leader was big on pushing pocketbook issues in a bid to woo small businesses and cop populist votes among small-c conservative voters who flip between PCs and NDP in certain parts of the province. There would be some navel-gazing after that trick cost the party its Toronto base, who were bigger on the party pushing social justice issues.

This time around it’s Ford’s PCs that are flipping the script on Horwath, and angling for blue-collar voters in the NDP’s labour base.

That Patty Coates, head of the Ontario Federation of Labour, was alongside at Horwath’s press conference was no coincidence. It was meant to send the signal that the NDP is still the party of labour. It was the OFL, the province’s largest labour federation, that passed a resolution at its recent convention calling for a $20 minimum wage.

But compared to the Ford government’s minimum wage announcement on November 2 – when Unifor head Jerry Dias and OPSEU president Smokey Thomas showed up to lend their endorsements – Horwath’s presser was a mite shorter on big labour power.

There has been a flurry of labour-friendly announcements before and since by labour minister Monte McNaughton on everything from money to promote skilled trades to apprenticeship programs and workplace protections for workers.

Also on November 30, the (nearly) unthinkable happened: the PCs’ Working for Workers Act passed in the legislature with support from NDP and Liberal MPPs. Among other measures, the Act will recognize the foreign credentials of workers. The Act is not all good news for workers; it also includes a provision that will allow the Workplace Safety and Insurance Board to redistribute cash in its insurance fund to businesses whose profits took a hit during the pandemic. What that may mean for workers’ disabilities benefits is unclear. But there’s no denying the PCs’ labour push is paying political dividends.

Last week, a number of other labour heavy hitters, including LIUNA and the Provincial Building and Construction Trades Council of Ontario, had high praise for the Ford government’s plan to spend $90 million over three years to promote the skilled trades to young people.

McNaughton has been to so many announcements of late that he’s accumulating an impressive collection of hard hats on a shelf in his Queen’s Park office.

The PCs’ labour push shouldn’t be all that surprising says the minister in a recent interview with NOW. He notes the premier’s reputation for “fighting for the little guy.” Maybe. Maybe not.

The premier has spent more time stoking a Kenney-like brand of conservatism that’s more concerned with privatization, keeping taxes low and the size of government in check. There is not so much progressive in that Conservatism.

The assault on education and social services continues. The Financial Accountability Office reported on November 29 that the Ford government underspent Ontario Works by $369 million, ODSP disability support programs by $83 million and autism programs by $137 million in 2020-2021.

The Ford government also continues to be at war with teachers’ and nurses’ unions. But it has added training and skills development to McNaughton’s labour portfolio, which suggests the government has an inkling that the future of work will look very different post-pandemic.

Also, it didn’t take long for the party’s brain trust to crunch the poll numbers on what it’s going to take to win a majority and see the wisdom in trying to take votes away from the NDP – with the Liberals practically non-existent.

Details are sketchy on what kind of convincing the premier‘s office needed to put its money where its mouth is on being the party “for the people.” Remember that? As one PC insider put it, “You can’t say you’re the party of workers if you’re not helping workers.”

But McNaughton argues that the PCs have historically been the party of working people. He mentions Bill Davis and John Robarts’ tenures as premier. Both were PCs and both were credited with bringing labour peace to the province. McNaughton doesn’t mention it, but Mike Harris also enjoyed blue-collar support for his Common Sense Revolution before going to all-out war with labour unions.

In the decades since, McNaughton agrees that “Conservatives have failed when it comes to workers.” He says he “picked a side” in 2019 when he made the decision to attend the Labour Day parade “and that was with workers.”

McNaughton has his own backstory. He ran for the PC leadership in 2014 and was endorsed by none other than Rob Ford, the premier’s late brother. McNaughton was identified with the party’s socially conservative wing at the time after he came out against the Liberal government’s sex-ed curriculum. He dropped out of the leadership race to endorse eventual winner Patrick Brown. He was one of the first MPPs to endorse Ford for leader. These days he is front and centre in the Ford PCs’ efforts to rebrand as the party of working people and pushing his own small business bona fides – his family has run a Home Hardware and Building Centre in Newbury in southwestern Ontario since it started as a farm and auto supplies business in the late 1940s.

The notion that Conservatives should be the natural party of working folk is echoed by federal Conservative party leader Erin O’Toole.

But labour unions have their own reasons for playing ball with the PCs. For Dias, it has to do with the Ford government’s half a billion-dollar commitment (along with the feds) to bring an electric vehicle manufacturing plant to Oakville. For Thomas, it has to do with being seen as having access to the premier.

Meanwhile, back at Tuesday’s press conference, Horwath said the NDP will be “mapping out for Ontarians what real respect for workers looks like” in the weeks and months leading up to the election. She says “it won’t be written on the back of a napkin,” alluding to criticism of the Ford plan that $15 won’t cover the cost of living.

“We also need to be doing other things to deal with affordability,” added Horwath, before warning that, “Doug Ford and the Conservatives are not on the side of workers.” It’s a message that the NDP will be repeating often between now and June’s election.