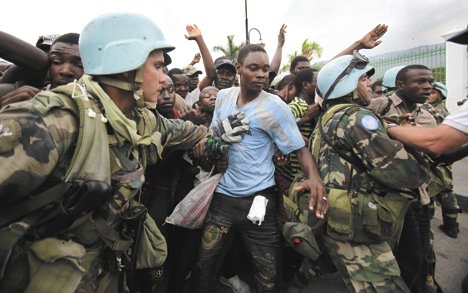 Leogane, Haiti – Here in the epicentre of the earthquake area, it’s simply unfathomable that foreign assistance is coming so slowly.[rssbreak]

Ostensibly, the primary problem is the threat of confrontation between hungry crowds and aid givers. That’s why the U.S. military is now busy securing the country.

But locals gathered in front of the mayor’s office on day nine have a different analysis. As one man puts it, “The aid should go to each little zone. When aid is sent to the middle of town or one central place, there is going to be the same disorder.”

And that’s exactly what the mayor’s representative is saying on the other side of the barrier. “The people causing the chaos are several aid agencies [who give aid away in central locations]. Only big men can fight to get anything. They find 15, 20 bags and sell it or stash it,” he says.

“We asked the organizations that we met with this morning to distribute to the peasants in their communities, where they will get the aid.”

So why, all these days after the quake, have the U.S. military, USAID and aid agencies not come up with an effective system? Why don’t they distribute to many areas rather than central sites where tens of thousands are forced to fight to get at it?

An insider at USAID who wishes to speak anonymously describes the situation as a Catch-?22. The global portrayal of the U.S. Army as an invasion force has given way to reticence among U.S. authorities, he says. General Ken Keen, Joint Task Force Haiti commander, has told USAID the military will not show up “unless there is an incident,” meaning violence.

“If the military doesn’t help, the aid won’t get distributed,” the USAID source says. “The longer we wait, the more desperate the population and the more likely there will be an incident. That’s the paradox.”

But putting the blame on public opinion might not be fair, since by most accounts the U.S. military handed out very little aid before Keen’s decision nine days after the quake.

Up until January 18, the military, the U.S. State Department and USAID were reportedly deadlocked over whether to deliver aid via trucks or air drops. President Obama made an executive decision to use air drops, but only outside Port-?au-?Prince.

But there’s yet another hitch: the military will not distribute aid, but only drop it and provide security. USAID must coordinate aid agencies to do the actual distribution. Sites are now being searched out.

The Canadian military, too, is here to provide security as well as clean-?up operations and medical help. These soldiers are more conspicuously armed today, on day 11, than they were two days ago. Canadian Navy Lieutenant Anthony Francis tells me on January 22 that they’re having few security problems. Locals, he says, “are very cooperative.” He goes on to explain that “the first day, we had 9mms and long guns. But it was determined that it was too aggressive a posture. It was scaring people away.”

Now, however, more guns are apparent, and there’s lots more military from everywhere, with U.S. helicopters landing every few minutes. And the aid is still being distributed “nan batay” (in battle), as Haitians scornfully describe it. Many continue to wonder why goods are not being given out tent by tent.

On another note, the place is up to its ears in doctors. They are tripping over themselves to use surgery facilities. I’ve run into five very frustrated U.S. and Haitian orthopaedic surgeons. One Canadian head of a field hospital calls the situation absurd.

There are five field hospitals in Léogâne, but the coordination is a mess. The Japanese doctors at the nursing school are the only ones with an X-?ray machine. Others need to use it. But despite the fleets of army and aid vehicles, none are put to use transporting patients for X-?rays.Same for meds. There is no interchange between hospitals.

Because I speak English, I found myself running back and forth looking for vehicles and medicine and, in the end, hired a van and 10 motorcycles. I posted the latter at the hospitals to run for meds and asked the former to transport people for x-?rays.

The system is partially working and partially deteriorating into chaos, like everything else here.