Here are the rules for the vaccine passport system in Ontario

Starting September 22, Ontarians will have to prove their vaccination status before entering restaurants, cinemas, gyms and other businesses 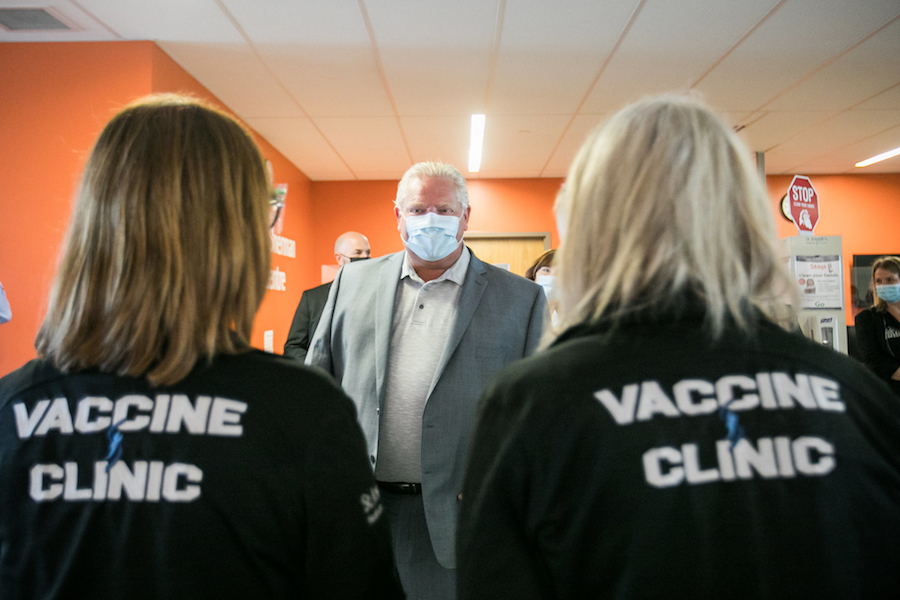 That means residents will have to show proof they are fully vaccinated in order to go to the movies, concerts, restaurants, gyms, casinos and other spaces public health officials consider high-risk for COVID-19 transmission.

“It’s no secret this is something that I did not want to do,” Ford told reporters during a Queen’s Park news conference on September 1. “This is a serious step that we’re not taking lightly and I know this is going to be very difficult for some people. This is a temporary tool that we won’t use for a day longer than we have to.”

He added the policy is based on evidence and medical advice.

The “enhanced vaccine certificate system” will roll out in two phases starting on September 22 and target indoor settings where masks are not always worn.

“At no time will people be denied medical care, food from grocery stores or basic medical supplies based on their vaccination status,” Health Minister Christine Elliott said, adding that the system will accommodate “those who have a medical exemption or children who are not yet eligible to receive the vaccine.”

Elliott added that the vaccine passport will take the form of an app that will be able to verify an individual’s vaccine receipt “while protecting your privacy.”

Nearly 77 per cent of eligible Ontarians age 12 and up have had two doses of COVID-19 vaccine and 83 per cent have had one shot.

However, the Delta variant, which is believed to be more transmissible, now accounts for more than 99 per cent of the province’s case.

“The months ahead will be challenging and it is vital that everyone eligible to receive both doses of the COVID-19 vaccine do so,” he said.

How will the Ontario vaccine passport system work?

The system will roll out in two steps. Starting on September 22, fully vaccinated people must show their vaccine receipt with a photo ID (such as health card or driver’s license) to enter spaces where the policy is in effect.

On October 22, the province will launch an “enhanced vaccine certificate” that will take the form of a unique QR code contained in a new app. It can also be stored in digital wallets.

The government defines “fully vaccinated” as having two doses with the second shot at least 14 days prior. You can’t substitute having had COVID-19 or a negative test, but there will be “narrow time-limited exceptions for testing,” the government said.

Businesses will also have an app to verify the QR codes.

What places will require a vaccine passport?

In determining the places requiring a vaccine passport, Ontario is focusing on higher-risk indoor public settings where face coverings cannot always be worn, including:

Outdoor spaces at nightclubs are included because public health officials consider them high risk. The system does not apply to employees in the above listed settings.

What places will not require a vaccine passport?

So far, the province has announced that the system will not apply at:

Who does the vaccine passport system not apply to?

Children who are 11 years of age and younger and are thus ineligible to be vaccinated are also exempted from the system.

Additionally, between September 22 and October 12, people attending weddings and funerals in meeting or event spaces can substitute a negative rapid antigen COVID-19 test from no more than 48 hours prior. The test must be privately purchased, the province said.

If I have a vaccine passport, will I have to wear a mask?

Will capacity limits be lifted at venues where the system is in effect?

Not at this time. In a statement, the province said it is taking a cautious approach. “This includes not expanding capacity limits in any setting at this time,” a statement reads. “As we monitor the impact of opening schools and the growing number of people returning to workplaces, we will evaluate when it may be safe to consider expanding capacity limits in settings that are captured by the new vaccine certificate policy.”

What has not been announced yet?

The province plans to establish “alternative tools for people with no email, health card or ID,” and will release details in the coming weeks. There will be “additional tools” for fully vaccinated people to show verification of vaccination received from outside the province or country.

Ontario is also creating vaccine certificates for Indigenous people regardless of whether or not they opted to enter their data into the provincial database called COVaxON. Officials say they will maintain “Indigenous data governance, control, access and possession principles.”