From avant garde to the absurd: The rise and fall of Davisville Junior Public School

Architect Peter Pennington was commissioned by the Toronto School Board to design schools for the baby boom – none of them tested the bounds of convention more than Davisville Junior Public School. 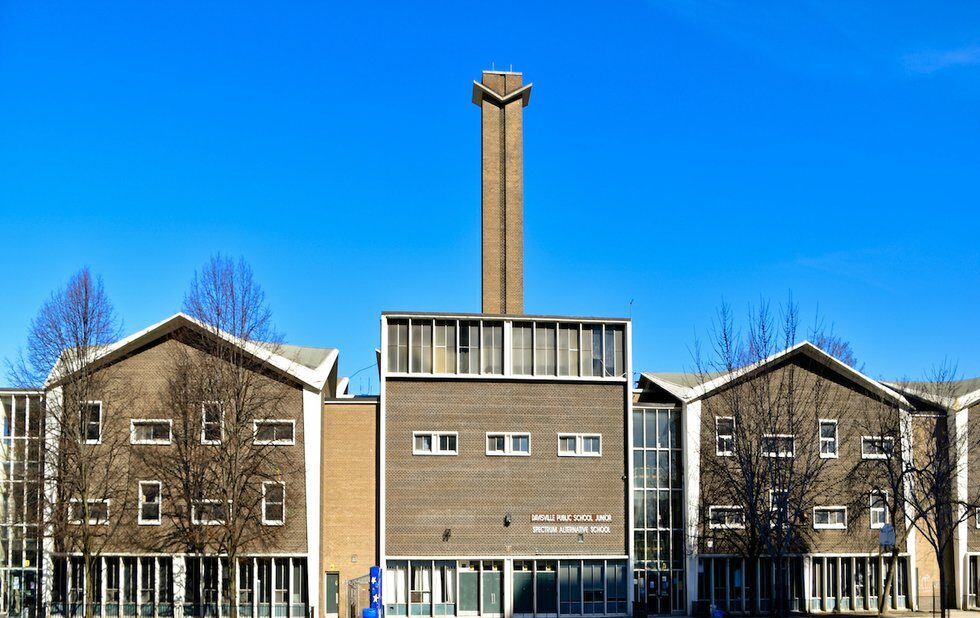 Before it was demolished last month, the city recommended Davisville Junior Public School be designated heritage. 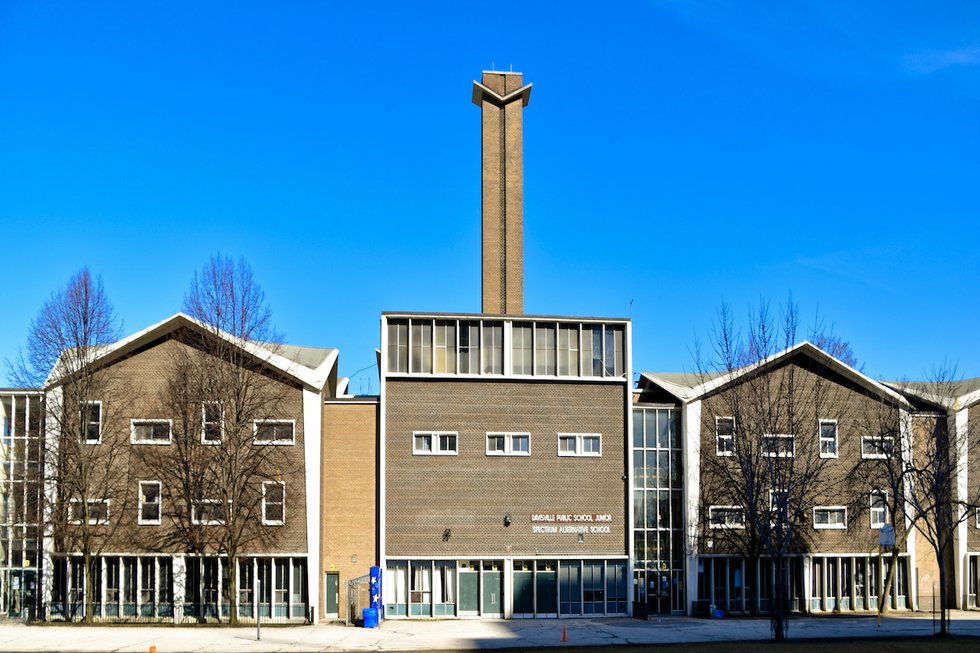 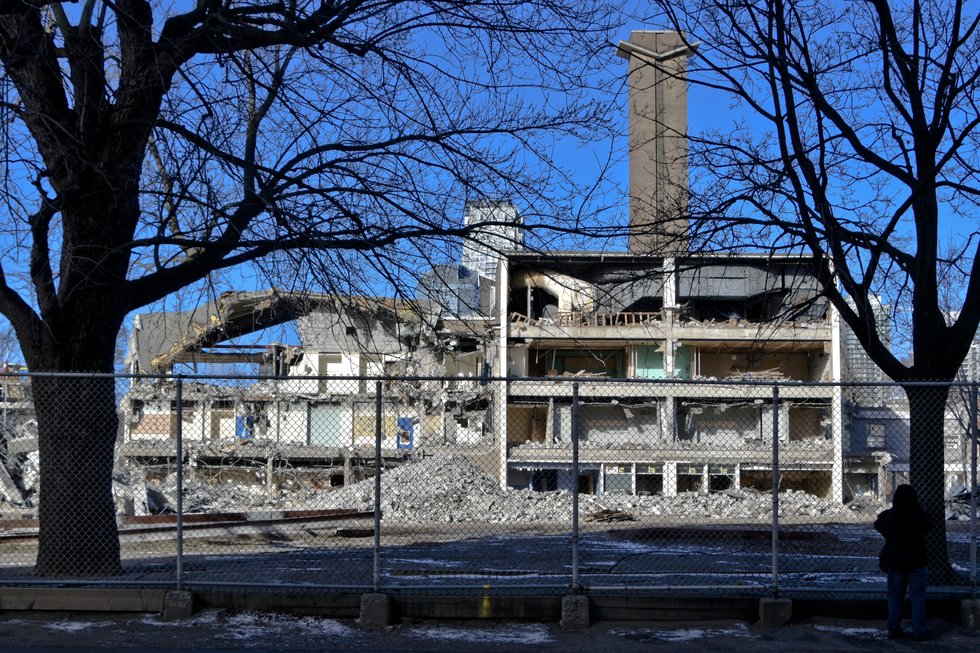 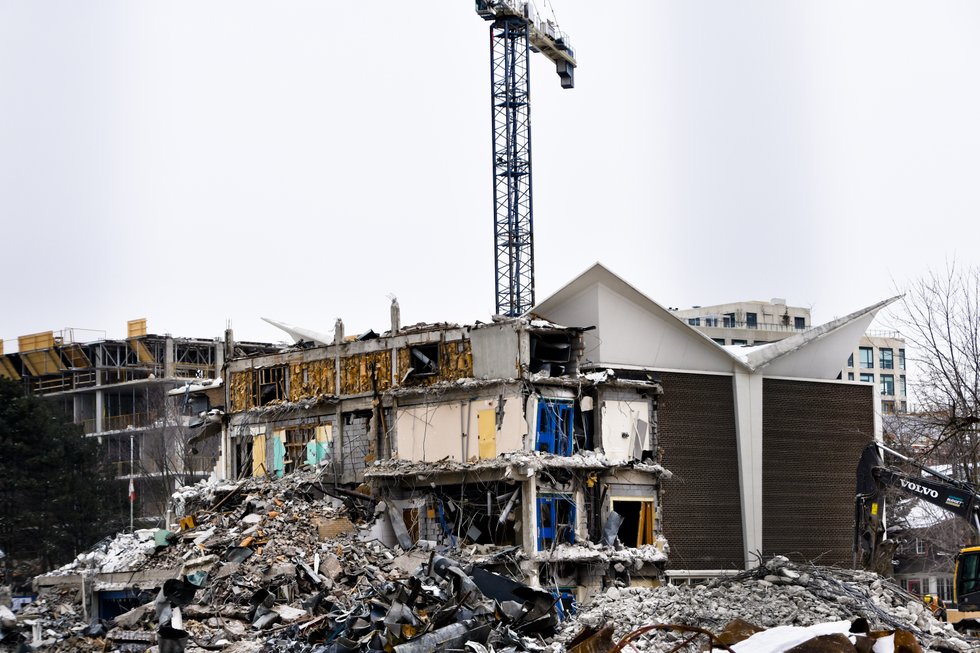 In the May-June 1962 issue of Canadian Art, architect Peter Pennington explained how post-World War II theories of “child-centred education” influenced his work in an essay titled A Gay School For Children. (The meaning of “gay” was different then.)

Pennington had been commissioned by Toronto School Board Chief Architect Frederick Etherington to design schools for the baby boom. In a span of less than half a decade, he designed 11 of them.

In the article, Pennington describes his philosophy of school design and his avant-garde approach at Lord Lansdowne Public School.

“We hoped that by creating a school of unconventional shape and using bright colours we might stimulate the children – and the school staff. A school,” he added, “gives the designer a chance to let his hair down, to join the wonderful world of children, to laugh at convention and forget about the tried-and-true.” 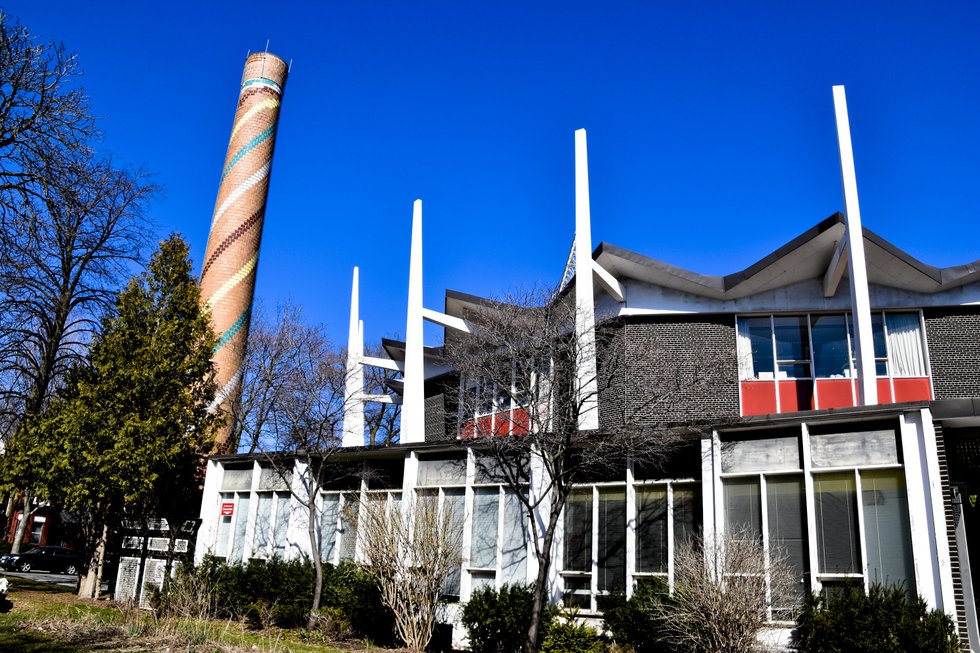 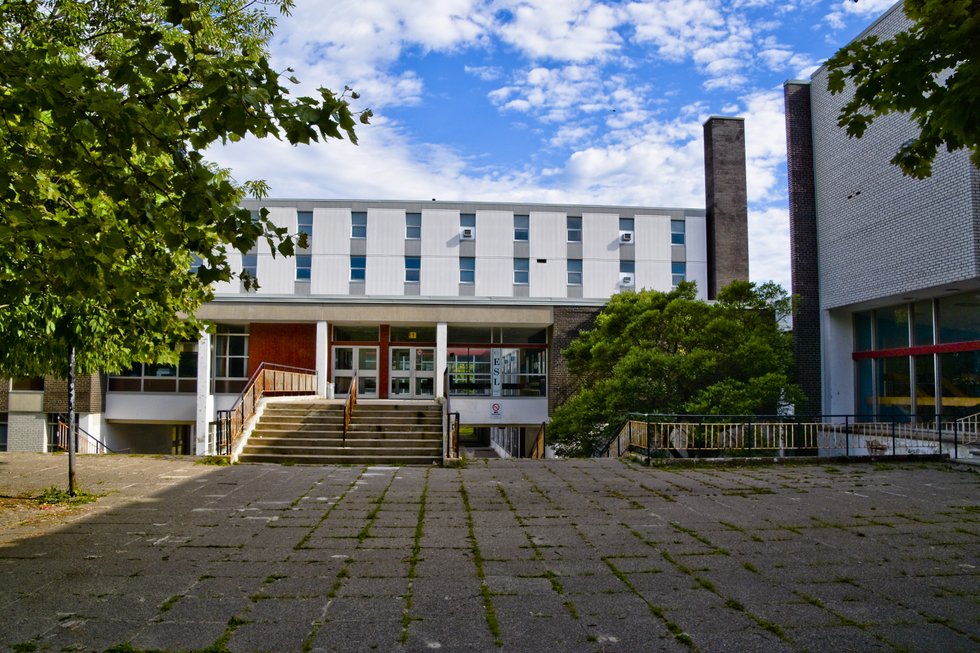 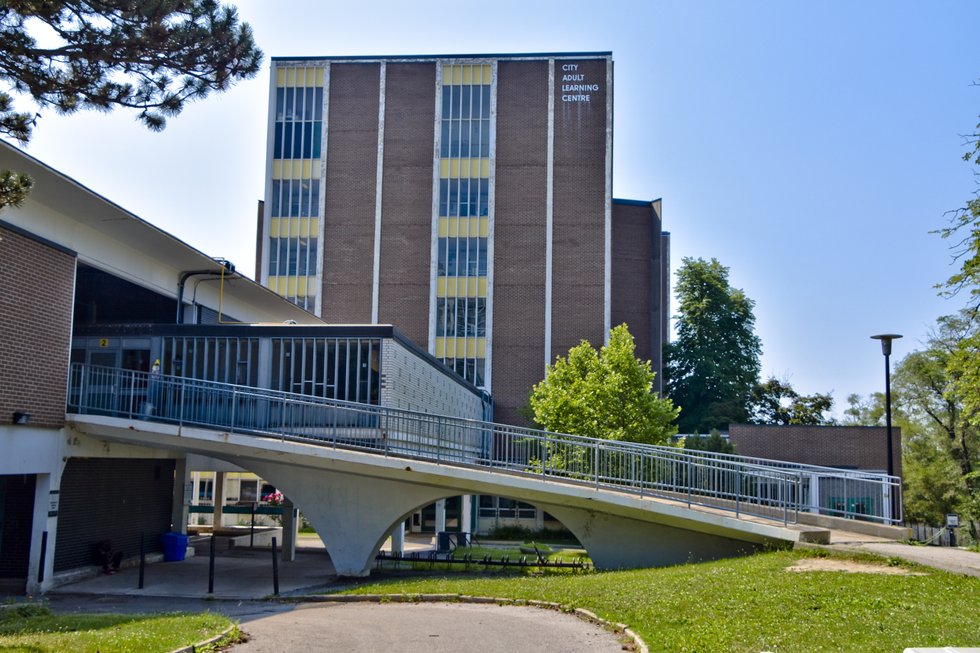 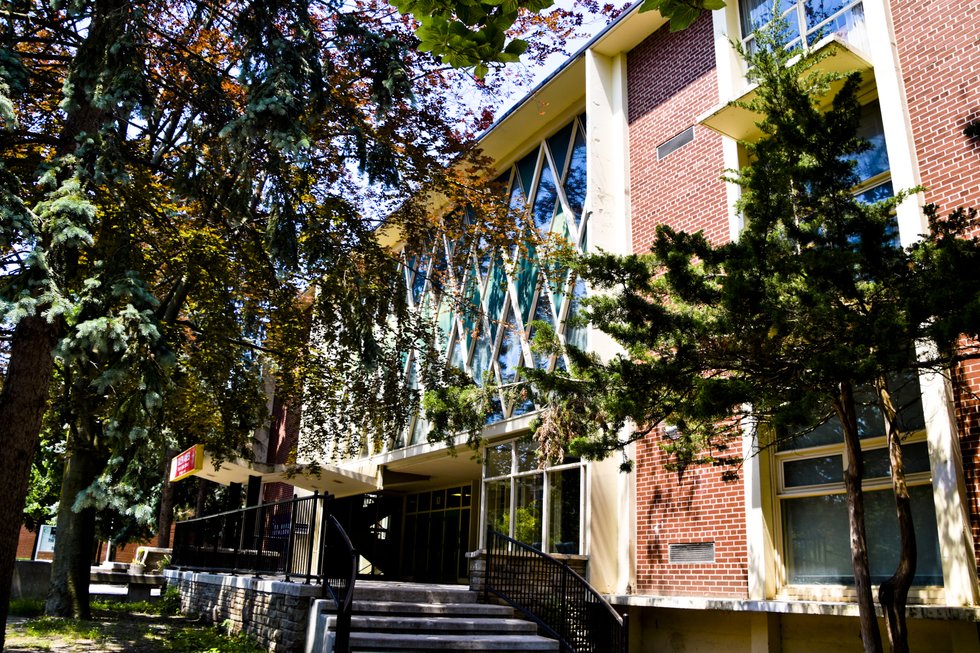 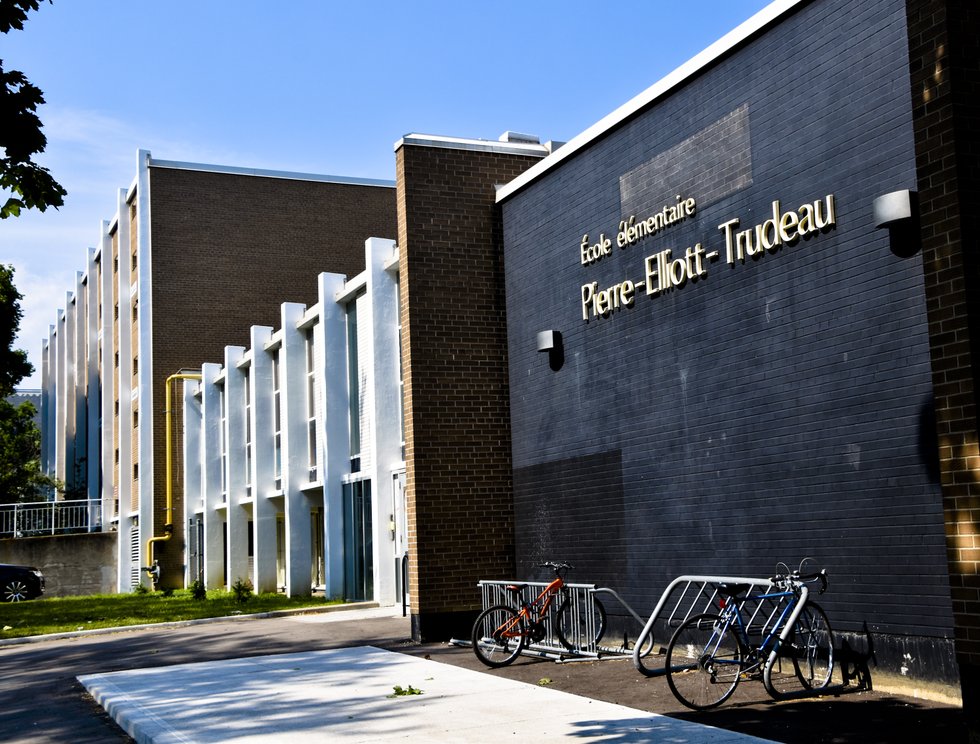 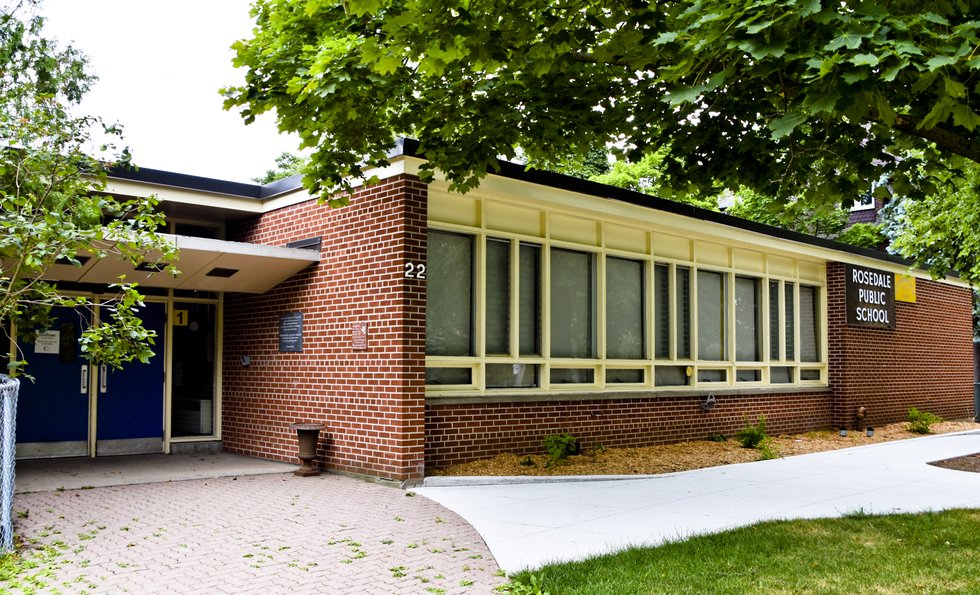 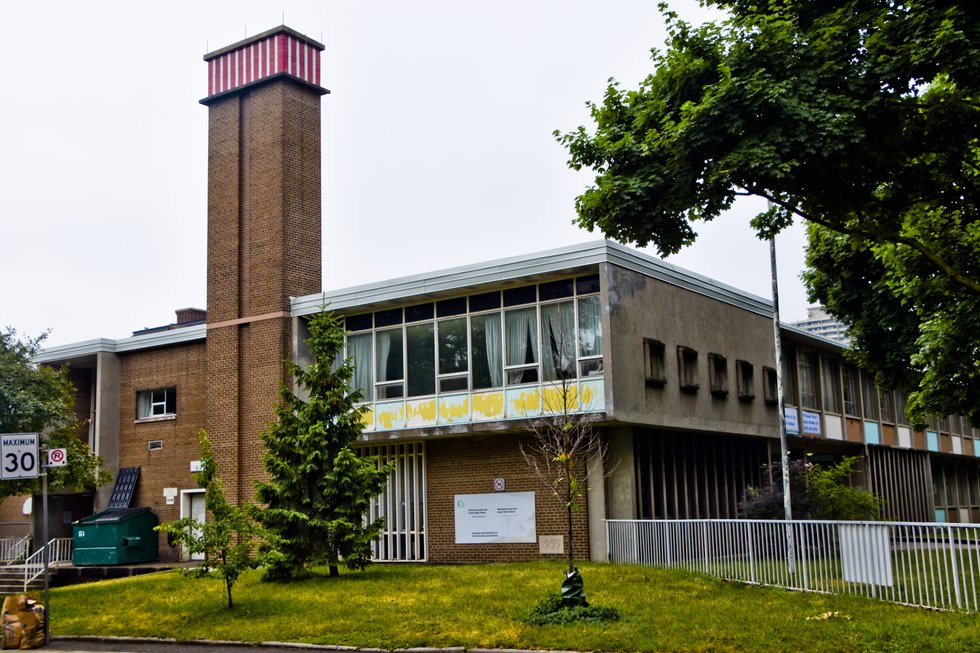 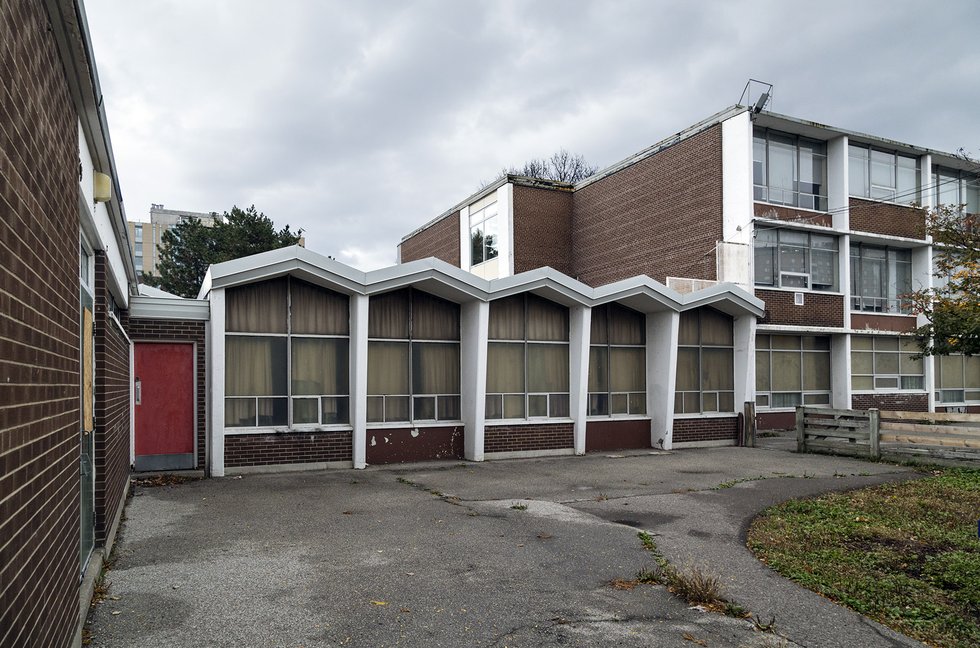 With 1962’s state-of-the-art Davisville Junior Public School and Metropolitan Toronto School for the Deaf, Pennington tested the boundaries of convention and let his hair down again.

Robert Moffatt noted in his blog Toronto Modern Davisville’s  “exotic hyperbolic paraboloids” that make up its roofs, the “treetop views of the outdoors through walls of transparent glass” and “windows on the upper floors [that] march across the facades in a jazzy syncopated rhythm of alternating verticals and horizontals.”

In 2016, however, the Toronto District School Board (TDSB) decided to demolish and replace the Davisville school, insisting it had outlived its usefulness and that the board did not have room on the site for a new school that would have to accommodate twice as many students as well as, eventually, a community aquatic centre.

City Planning recommended that Davisville school be designated heritage but, according to trustee Shelley Laskin, “not one parent, not one student, not one teacher struggled to save it.”

Instead, local Councillor Josh Matlow proposed a motion at Toronto and East York Community Council to defer a decision on designation “indefinitely” and it passed.

But that was not the end of efforts to save Davisville.

In 2017, the school was placed on the National Trust for Canada’s list of 10 most endangered places. Kim Storey of Brown + Storey Architects nominated Pennington for Architectural Conservancy Ontario’s Post-1945 Award. ACO and a “mod squad” led by Carol Kleinfeldt and Roman Mychajlowycz of Kleinfeldt Mychajlowycz Architects offered the TDSB proposals that would allow new build on the Davisville site without destroying Pennington’s school. But to no avail. Last month, the school was reduced to tangles of rebar and piles of rubble.

Laskin insists that “heritage aspects of our facilities are always considered when we look at a capital project. Where possible, we look to maintain what we can of heritage significance but what matters most for us is: Can a facility be designated heritage and still serve the needs of our students and staff?”

Laskin says that was not possible in this case “given the extent of our backlog and our capital needs, that the province would provide millions of dollars for retrofit above what is necessary to build a new school.”

Last year, ACO and the Toronto Society of Architects mounted a Toronto School Buildings At Risk symposium, chaired by ACO Toronto president Catherine Nasmith. Marco Polo, professor of architectural sciences at Ryerson University, presented the results of his students’ Davisville case study, which examined ways in which Pennington’s distinctive “formal elements” might be incorporated into a new school. Their proposals included “replication as preservation,” which would make the school larger and adapted to TDSB needs but in appearance close to its original form.

Were any of these proposals feasible? According to a study by ERA Architects, they were. But Laskin described the findings as “absolutely unsubstantiated – absurd. Apart from that, aren’t proposals for conservation by replication anathema to the spirit of conservation?”

The loss to Toronto’s diminishing inventory of mid-century-modern buildings is significant but so is the burden on the architects of their replacement. It’s not easy building on the shoulders of giants, even when their works are past their prime.

“Conservation efforts are most successful and meaningful when their users embrace and support it,” says Avinash Garde, a principal at Snyder Architects, the firm commissioned to design the new school.

“Peter Pennington’s Davisville School was a landmark building and rightly admired for its mid-60s optimism by architects and architectural critics, but what made its architecture special was limited to its exterior. None of that exuberant spirit made it into the interior,” says Garde.

“The lack of natural light, tiny rooms, narrow corridors and low ceilings did not endear it to its students and teachers. Even the entrance foyer felt like an extension of a corridor,” says Garde. “As the needs of its students and staff changed, especially when it ceased to be a school for the deaf, Pennington’s school ceased to be child-centred. It was no longer a great school and that, in the end, was the cause of its demise.”

Will Snyder Architects’ new Davisville school be considered a masterpiece in its time?

The new school will include movable walls and furniture and interconnecting resource rooms to permit a variety of classroom configurations for individual, small or large group learning, a design that’s clearly inspired by the latest version of the child-centred educational philosophy that drove Pennington.