Hidden Toronto: Ghosts of Toronto past 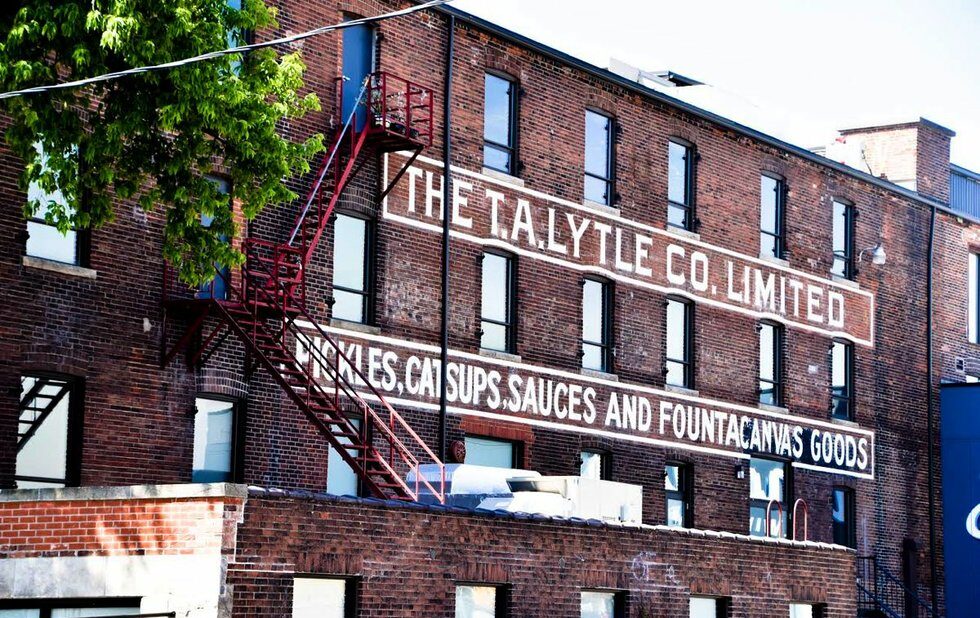 More than the Toronto you find today, with its glass towers scratching at the sky, I love the bones of the place it once was.

The human-scale buildings made of brick, wood and stone and decorated with tile, columns and gargoyles are becoming rarer than their bland, glass counterparts, but there are still many of these beauties to be discovered.

Finding them and rooting out the names of the men, women and industries once housed within them gives me the greatest thrill.

My mother, Simone Johnston, sang with the folk group The Travellers. She toured all over, gave a command performance for the Queen and made a beer commercial at the Royal Alex.

But she was happiest at picket lines, union halls and community centres, singing real folk songs about coal miners and fishermen collected from across Canada.

Years later, she joined the fight to have the city clean up the toxic nightmare left by factories in the Junction Triangle where we lived. Funnily enough, they were the very same factories I delighted in discovering as a kid.

Junction Triangle of my imagination

The neighbourhood in the Junction Triangle where I grew up and my parents still live was laid out in the late 1880s by Simeon Janes, who also developed the Annex.

Our home dates back to those early days and my mother would tell me tidbits of its history – the doctor whose practice was in the basement, the stable around back and how the doctor’s 20-something wife had died in the house. There were other wonderful details, too, things I could see for myself if I looked closely, like the bricked-in archway in the basement that had once been a passage to our neighbour’s place.

It was the adrenaline rush of these secrets of the past that made me want to seek out more of them. Each summer, I would tear around the neighbourhood on my bicycle or roller skates looking for new, exciting places. Lucky for me, there were always boarded-up loading bays or ancient-looking coal chutes to discover or, better yet, faded ghost signs to puzzle over (see sidebar).

One summer, I came across a tiny, shuttered diner. With a single counter running its length, it looked like a perfect time capsule of something I only ever saw in old movies.

When I began working downtown, I would take the 504 streetcar each day. I fell in love with the early industrial buildings dotting King: an old motor inn near Bathurst and a car dealership near Strachan. As they were closed and then torn down, it worried me to think these places were fading away, undocumented.

I stopped taking the streetcar and starting walking home so I could take photos of buildings. I’d change my route each week, trying to cover as much ground as I could. I began making special trips to scout out new swaths of the city.

Though I’d grown up here and thought myself a true Torontonian, I began to realize that there was so much I’d never seen before.

At the end of each week, I would sift through my photos and try to find information on the history of each building. More often than not, the details that bring a time and place to life were missing. I decided to start writing their histories myself. That was 10 years ago.

I keep a notebook for each building, transcribing the names and occupations of residents who lived at each address. Yes, it takes ages, but there is something in physically writing out all the names that gives me a deeper sense of the lives lived there.

I also lean heavily on assessment rolls, land petitions and fire insurance maps – handy resources that provide details on lot size, land value, building materials and structural changes. From there, I scour photographs from the collections at the Toronto Public Library and City of Toronto Archives, hoping to catch glimpses of my subjects. Thanks to the great work of our early Toronto photographers, I’m often lucky enough to find one – sometimes two.

I’m fascinated by people who did work that most of us have likely never given much thought to – like A. S. Richardson, who gave the city its first wax mannequins, Charles Bluett, the night watchman who stumbled into the detective business, or Arthur Jukes Johnson, who would become our first chief coroner.

Resurrecting the stories behind eight hidden gems of Toronto 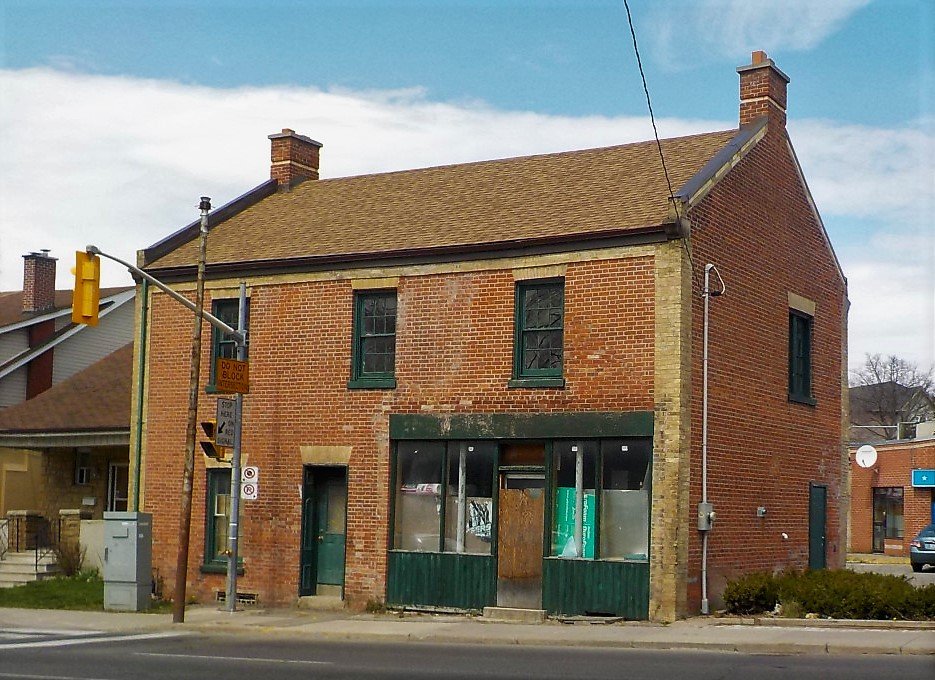 As the name suggests, this gem was originally home to the business of planking roads – specifically, the stretch from Albion to Dundas West. As it turned out, wood roads weren’t exactly ideal and so the Plank Road Company soon folded and was left to deteriorate. Happily, the company’s office was built to last and still exists. 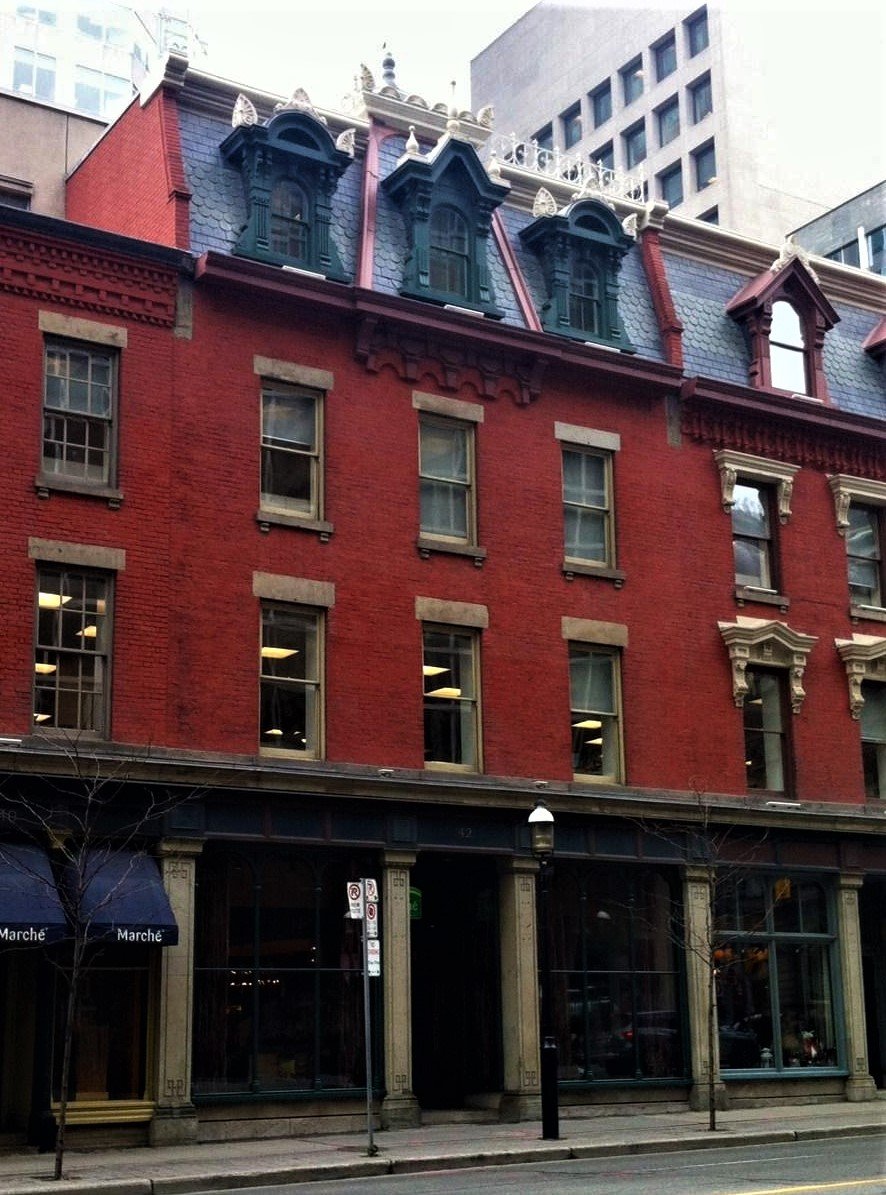 This former warehouse is notable for being home to bookseller A. S. Irving. Appalled by the rising popularity of the dime novel, Irving felt duty-bound to offer the public “real literature” at a more affordable price. By joining forces with the printing firm Copp, Clark and Co., Irving was able to bring the cost of hard covers down, but it would have little effect on pulp sales. In the end, the company did its best business in postcards and sheet music. 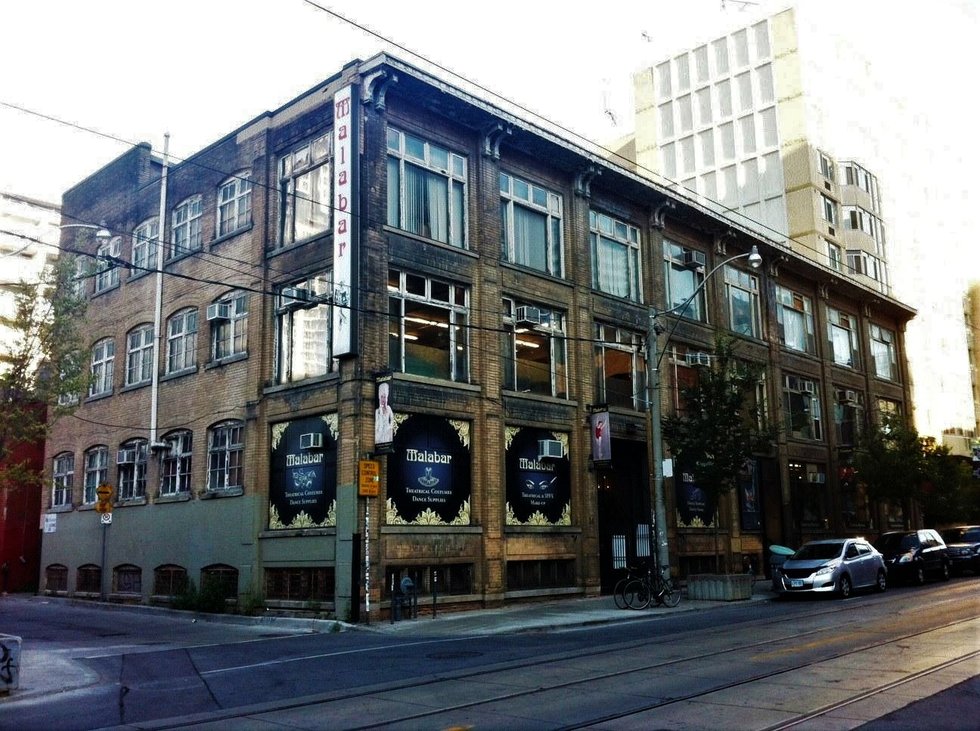 Originally from Manitoulin Island, Harold Ritchie came to Toronto in 1904 and got a job selling grocers’ supplies. Not long after, having struck on the idea of selling multiple products lines at once, he decided to go into business for himself. Described as a “doctor of salesmanship,” by 1913, he’d moved into this McCaul warehouse, his success earning him the nickname “Carload Ritchie.” At the time of his death in 1933, he was one of the wealthiest men in Canada, with companies in the U.S. and England, including the Eno’s Fruit Salts company of antacid fame, which he bought up in the late 1920s. 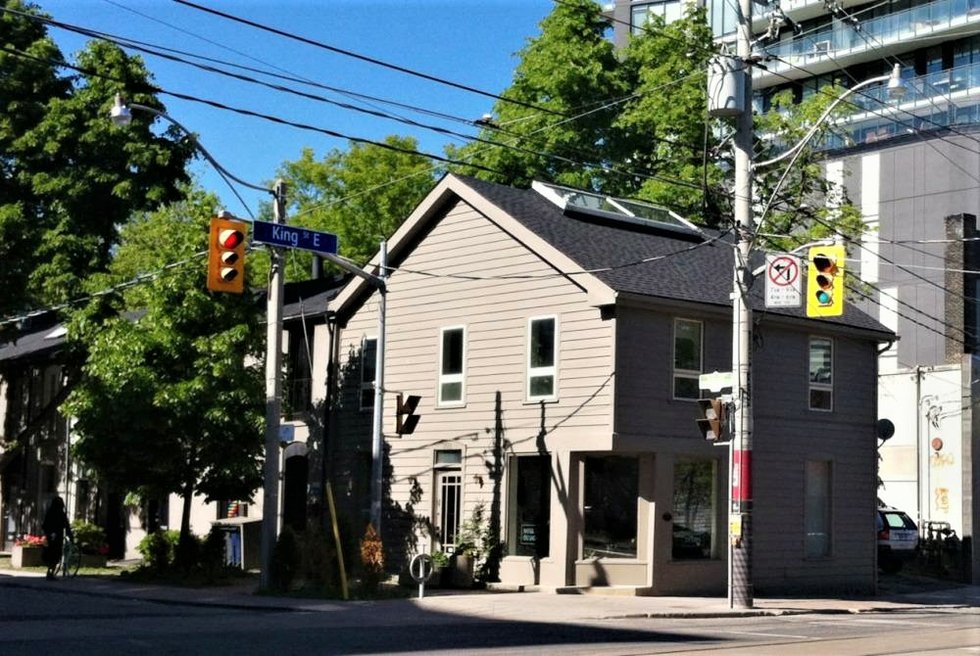 In the early 19th century, the intersection of King and Berkeley acted as a gateway to the city for those travelling west from neighbouring towns. It was here that Kingston Road became King, a prime spot for J. Matthews’s Garibaldi House, a hostelry named for Italian nationalist and general Giuseppe Garibaldi, one of the most popular and beloved figures of the time. 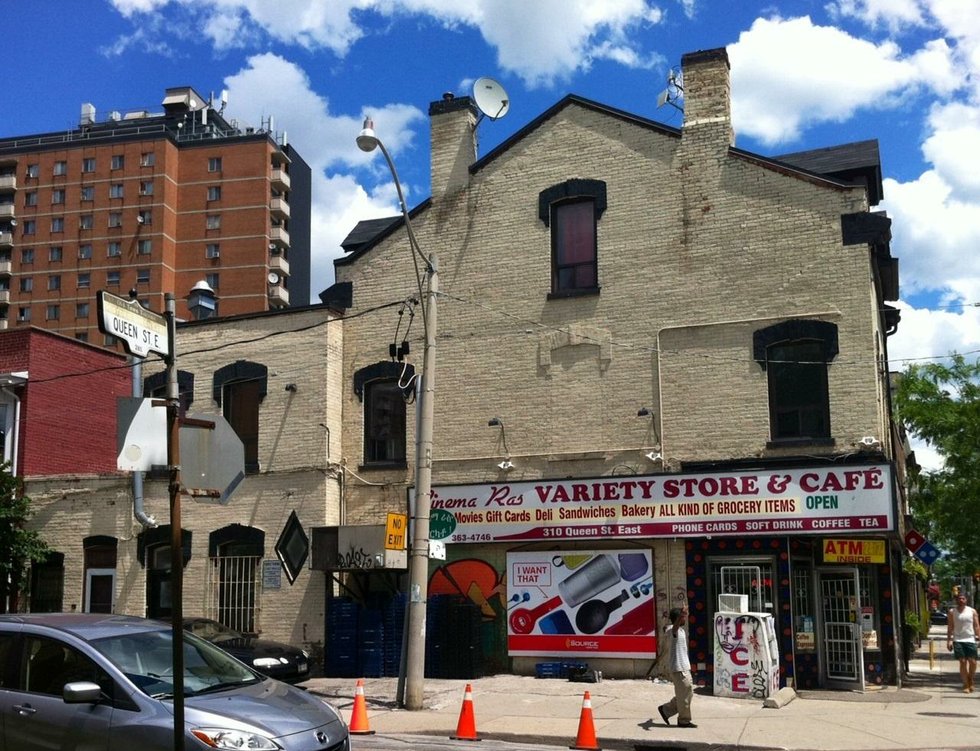 Thomas Patterson had worked as both a city and railroad cop before finding success in the flour and feed business. Come the late 1870s, he decided to funnel some of his wealth into real estate and built this inn at the corner of Queen and Berkeley, naming it Prospect House. Its financial prospects, however, proved not to be great, and it closed in 1886, five years after Patterson washed his hands of it. 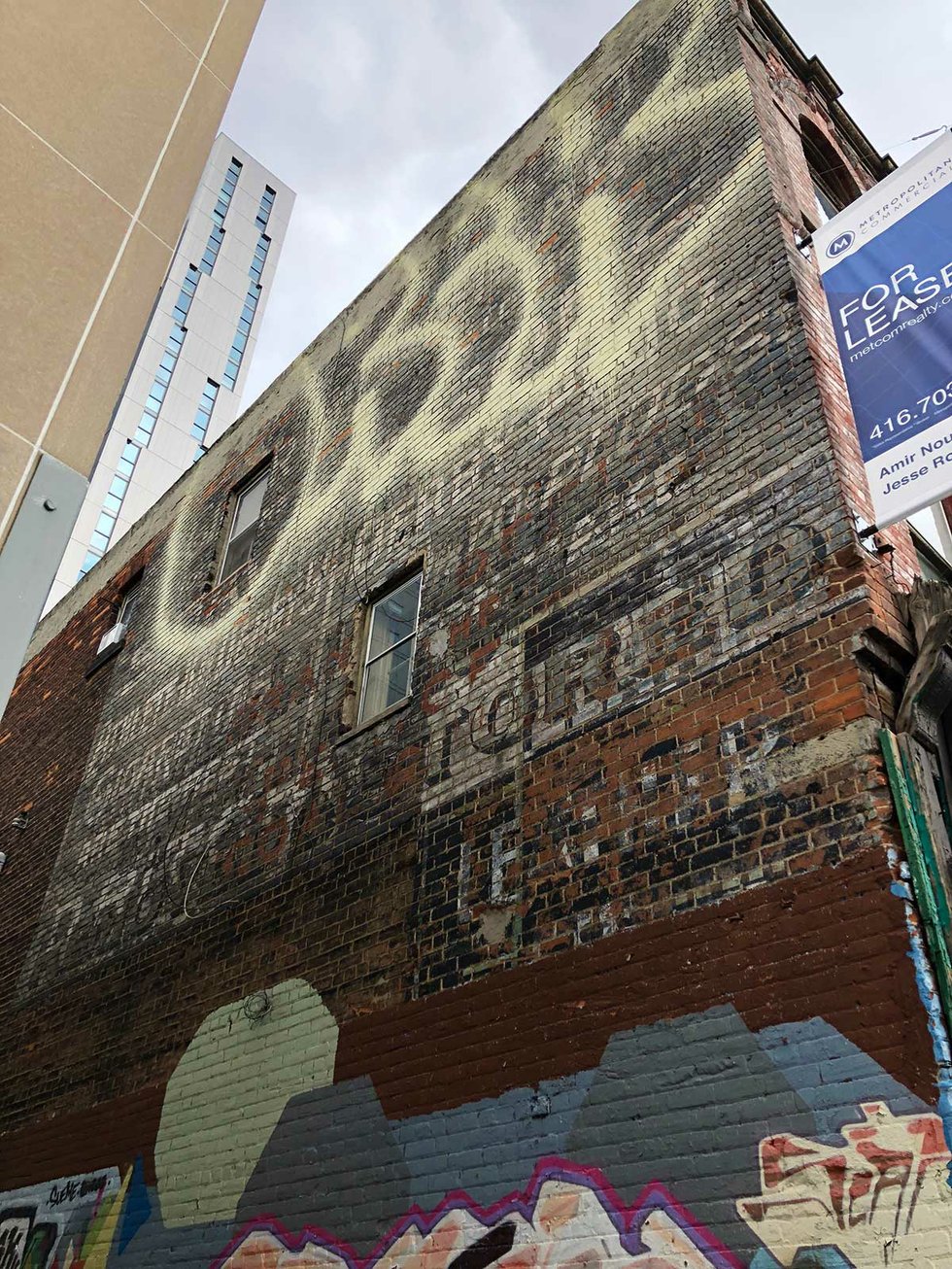 A wonderful palimpsest of ghost ads blankets the north side of Spadina near College. Clearest (at least to my eyes) are the ads for Derby Plug tobacco and fur storage at this building that has been occupied by a number of businesses, including a picture frame outfit owned by long-time Toronto resident James Geddes. 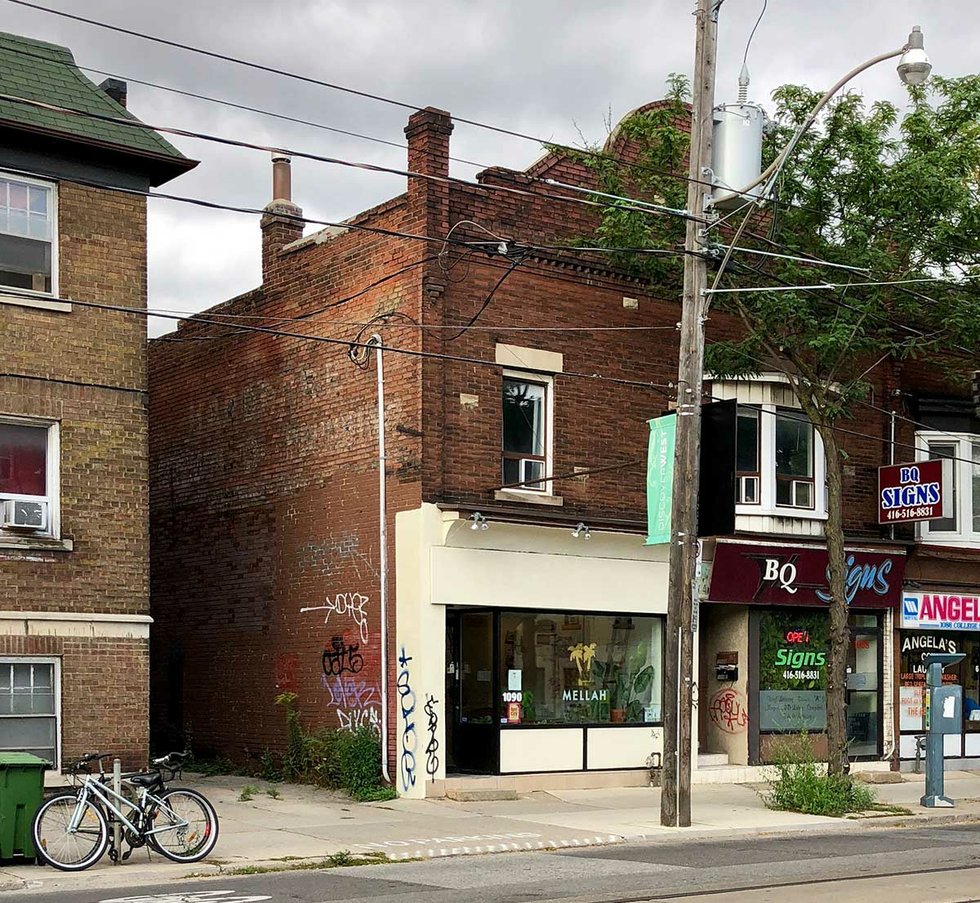 This storefront still advertises one of its early tenants. Between 1909 and 1919, both Wilfred Magee and Peter Snowball ran hardware stores from this site, though it’s hard to say now whose name graces the brick. 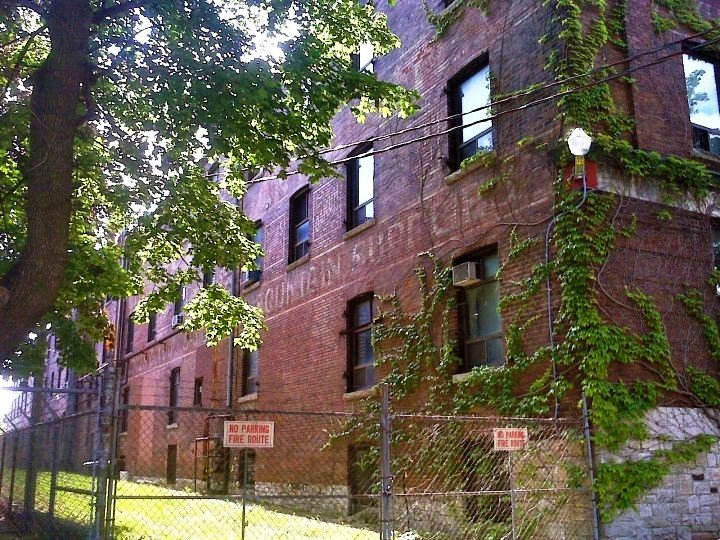 Born in Ireland, Thomas Lytle came to Toronto in 1871 and soon found work at William Wilson’s Vinegar Works on Bay. After a decade working for Wilson, Lytle took his hard-earned know-how, expanding his line to offer pickles, jams, sauces, fountain supplies and more. The factory, now home to the Drake Commissary, still advertises a number of his products, as well as those of the Scythes company, which took up residence after Lytle departed. Recently, these ads have been given new life by sign painting firm MuralForm.

Katherine Taylor’s blog, One Gal’s Toronto, can be found at onegalstoronto.wordpress.com.